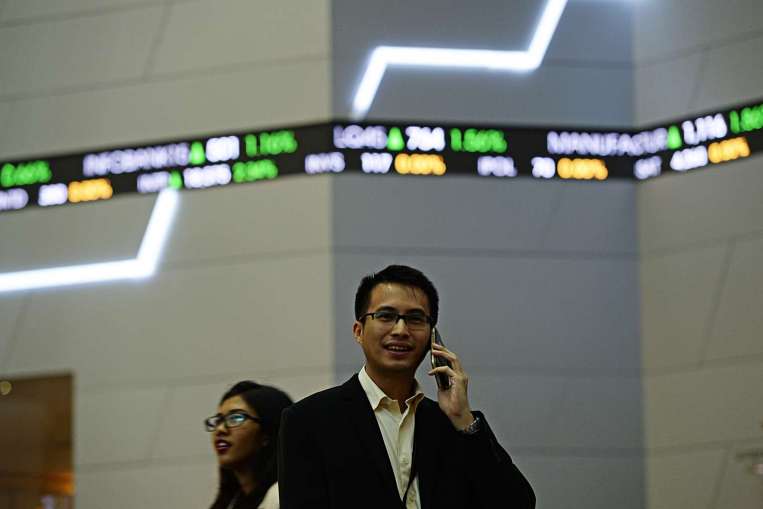 Asian stocks followed U.S. shares higher ahead of a meeting of finance chiefs from the Group of 20 countries as a weaker yen buoyed Japanese equities.

The MSCI Asia Pacific Index rose 0.3 percent to 119.76 as of 9:02 a.m. in Tokyo, headed for a 0.1 percent increase this week. The Standard & Poor’s 500 Index climbed 1.1 percent in New York Thursday to close at its highest since Jan. 6 and West Texas Intermediate crude rose 2.9 percent, as a rout in Chinese equities failed to spread. Focus turns to the G-20 meeting from Friday in Shanghai as volatility in markets unsettles investors this year.

“With the upcoming G-20 meeting, we may well see a lot of talk and little action,” said Niv Dagan, Melbourne-based executive director at Peak Asset Management LLC. “What we’d like to see is a coordinated approach from the G-20 to boost spending and produce some sense of certainty for markets. Investors remain cautious. We are not seeing too many companies increasing their profit guidance and investors are happy to sit on their hands.”

Japan’s Topix index rose 1.1 percent, with all 33 industry groups advancing, as the yen traded at 113.14 per dollar after falling 0.7 percent Thursday.

Sharp Corp. sank 11 percent in Tokyo. Hours after winning a board vote to take control of the Japanese electronics maker, Taiwan’s Foxconn Technology Group said it wouldpostpone signing a definitive agreement because of “new material information.” This refers to about 350 billion yen ($3.1 billion) of contingent liabilities at Sharp, the Wall Street Journal reported, citing unidentified people familiar with the matter.

The Shanghai Composite Index tumbled 6.4 percent on Thursday as surging money-market rates signaled tighter liquidity and the offshore yuan declined for a fifth day. Central bank Governor Zhou Xiaochuan is set to speak in Shanghai Friday as governments and private sector analysts continue to downgrade their outlook for the world economy amid China’s slowdown, tumbling oil prices and tepid demand.

The MSCI Emerging Markets Index added 0.2 percent on Friday, trimming its decline over the past year to 26 percent. John-Paul Smith, one of few to anticipate the slump in developing markets that began in 2011, sees no sign of a turnaround and says the current environment resembles that of the late 1990s, when crises in Southeast Asia and Russia roiled the entire asset class.

Futures on the S&P 500 added 0.1 percent. The underlying U.S. equities gauge rose to a seven-week high Thursday as banks and consumer-staples shares climbed amid optimism on the economy after data showed weakness in manufacturing may be easing. A report showed orders for U.S. capital goods rebounded in January by the most since June 2014. Orders for all durable goods rose 4.9 percent, the most since March.

The MSCI Asia Pacific gauge trades at 12.7 times estimated earnings, below its average for the past five years. The gauge slumped 14 percent from the start of the year through the low on Feb. 12 and has since rallied 6.4 percent.