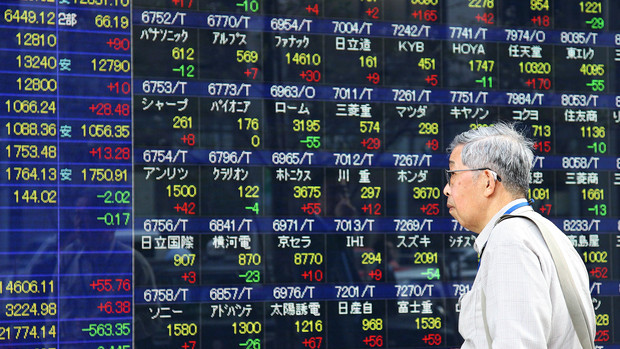 Asian stocks climbed from a three-year low, sparked by a rally in Chinese shares as the nation’s weakest economic growth since 2009 raised speculation the government will boost stimulus measures.

The MSCI Asia Pacific Index added 0.8 percent to 119.85 at 4:38 p.m. in Hong Kong, reversing an earlier loss of 0.5 percent. The Shanghai Composite Index jumped the most in two months as industrial companies surged. China’s industrial production, retail sales and fixed-asset investment all slowed at the end of the year, while gross domestic product expanded 6.8 percent in the fourth quarter.

Investors need to ask “what is the next policy action in terms of stimulus from the Chinese,” Didier Duret, chief investment officer at ABN Amro Private Banking, told Bloomberg TV in Hong Kong. “It will probably come into infrastructure — railways, telecoms and air space infrastructure. That’s the area that should benefit.”

Chinese shares fell into a bear market last week on waning confidence about the government’s ability to manage its economy and financial markets. Tuesday’s data showed China’s economy is growing at two speeds, with old rust-belt industries from steel to coal and cement in decline while consumption, services and technology do better.
“The market was pricing in much worse,” said Nader Naeimi, Sydney-based head of dynamic markets at AMP Capital Investors Ltd., which oversees about $114 billion. “The markets had intense fears over China.”

Concern about the outlook for global growth, volatility in China and a plunge in commodities prices have roiled markets worldwide, with the MSCI Asia Pacific gauge down 9.2 percent in 2016 and closing Monday at the lowest level since September 2012.
Energy companies had the biggest surge in Asia’s benchmark index Tuesday as Brent oil rebounded from the lowest close in 12 years. PetroChina Co. soared 4.9 percent in Hong Kong and Thailand’s PTT Exploration & Production PCL rallied 7.1 percent to lead gains.

Japan’s Topix index closed with a gain of 0.2 percent, after rising as much as 0.5 percent and dropping more than 0.9 percent. South Korea’s Kospi Index added 0.6 percent. Taiwan’s Taiex index increased 0.6 percent while Singapore’s Straits Times Index jumped 1.5 percent, the most since November. New Zealand’s S&P/NZX 50 Index gained 0.4 percent.
The Nikkei 225 Stock Average advanced 0.6 percent. Australia’s S&P/ASX 200 Index added 0.9 percent. Before Tuesday’s gains, both were down 19 percent from their 2015 peaks, close to a 20 percent drop that would meet the definition of a bear market.

The MSCI All-Country World Index slipped to its lowest point since July 2013 on Monday, as banks drove the Stoxx Europe 600 Index to a 13-month low. Markets in the U.S. reopen Tuesday after a holiday.