The Nigerian Stock Exchange (NSE) pared gained last week to make it the second week the Exchange will close in the red this year.

Market capitalisation dipped by 0.38 percent or N81 billion from N21.530 trillion recorded in the previous to N21.449 trillion last week.

The most traded equities for the week were Transnational Corporation of Nigeria, Living Trust Mortgage Bank Plc and Japaul Gold and Ventures Plc. Together, the three accounted for 1.582 billion shares worth N1.564 billion in 2,726 deals and contributed 36.9 percent and 6.02 percent to the total equity turnover volume and value, respectively. 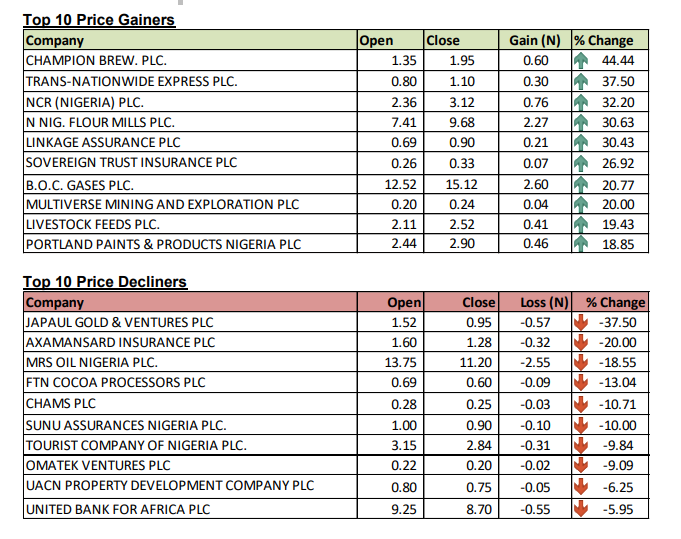 Broad-based profit-taking dragged on the Nigerian Exchange Limited (NGX) on Wednesday even though businesses have started releasing their third-quarter earnings reports.

Living Trust led gainers with N0.07 or 9.59 percent to settle at N0.80 a share. Followed by the N0.09 or 9.57 percent increase recorded by AIICO after publishing its third-quarter report on Wednesday. University Press remained among top five gainers for the second consecutive week, posting N0.15 or 0.09 percent gain on Wednesday.

The battle for the control of FBN Holdings continues as it led the most trade equities again with a total traded shares of 75,458,656 shares valued at N898,012,945.70. See other details below.

Universal Insurance led gainers with N0.02 or 10 percent gain to close at N0.22 a share. University Plc emerged second with N0.15 or 10 percent increase to settle at N1.65 a unit. See other details below.

The Nigerian Exchange Limited (NGX) opened the week in green as more stocks extended their gains on Monday.