Investors in the Nigerian Stock Exchange (NSE) gained N552 billion last week despite a negative first week of the year.

In terms of volume traded, the Financial Services Industry led the activity chart with 1.714 billion shares valued at N13.352 billion exchanged in 15,102 deals and contributed 49.74 percent and 40.80 percent to the total equity turnover volume and value, respectively.

The Construction/Real Estate Industry followed with 768.131 million shares worth N4.203 billion in 430 deals. Conglomerates Industry came third with a turnover of 279.799 million shares estimated at N578.694 million in 1,199 deals.

The three most traded equities during the week were UPDC Real Estate Investment Trust, Mutual Benefits Assurance Plc and Transnational Corporation of Nigeria Plc. Together, the three accounted for 1.224 billion shares worth N4.459 billion in 929 deals and accounted for 35.52 percent and 13.63 percent to the total equity turnover volume and value, respectively.

While the market value of listed stocks expanded by the same 2.63 percent or N552 billion from N20.978 trillion recorded a week earlier to N21.530 trillion last week.

The Nigerian Stock Exchange has gained 2.25 percent in 2021 so far. 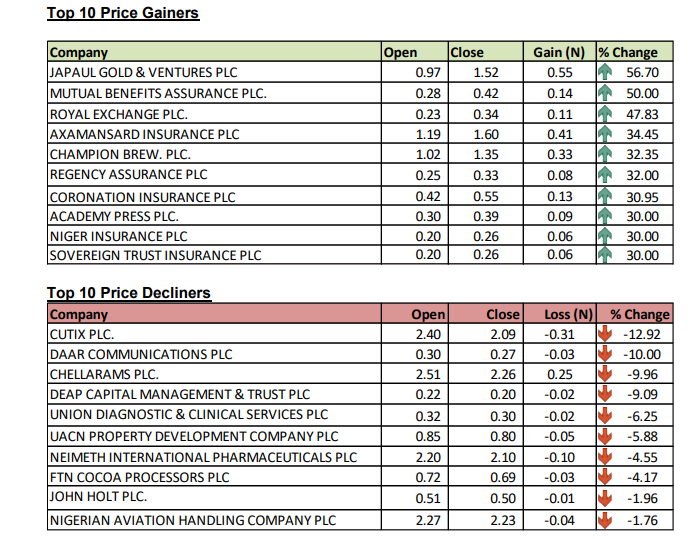 Seplat Gained N25.597 Billion on Thursday to Top Other Stocks

Stanbic IBTC Holdings Plc, one of the leading banks in Nigeria, on Wednesday announced its Board of Directors has decided to audit the Half Year Financial Results of the bank.

The bank announced in a statement signed by Chidi Okezie, Company Secretary.

According to the bank, the Audited Results for the Half Year Ended 30 June 2021 will be released not later than 29, August 2021 after the Central Bank of Nigeria has approved it.

The statement reads, “Having duly notified NGX RegCo of this development, the Management of Stanbic IBTC wishes to notify the investing public that the Company will aim to publish its 2021 Audited Half Year Results on or before 29 August 2021 in accordance with the extant Rules of NGX Regulation Limited as cited above.