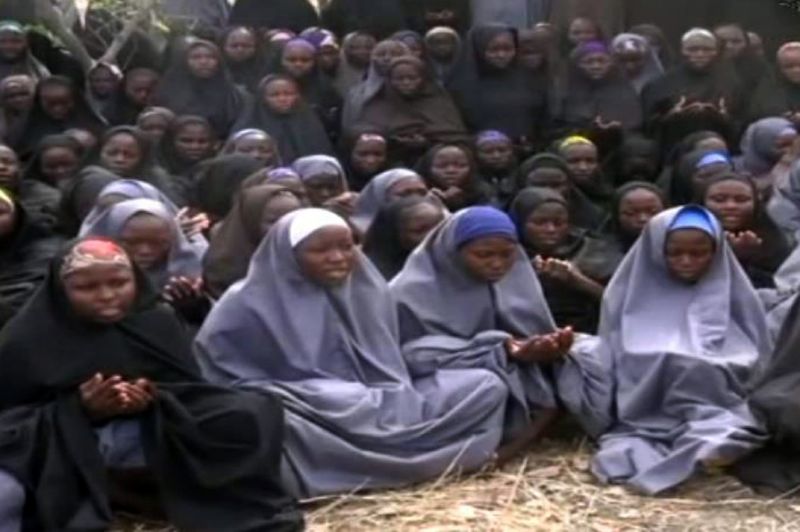 The Presidency on Saturday said security agencies secured the release of 82 Chibok girls in exchange for some Boko Haram prisoners.

The Senior Special Assistant to the President on Media and Publicity, Garba Shehu, disclosed this in a statement made available to journalists on Saturday night.

The statement read, “The President is pleased to announce that negotiations to release more of the Chibok Girls have born fruit with the release of 82 more girls today.

“After months of patient negotiations, our security agencies have taken back these abducted girls in exchange for some Boko Haram suspects held by the authorities.

“The girls are due tomorrow (Sunday) in Abuja to be received by the President.

“The President expressed his deep gratitude to security agencies, the military, the government of Switzerland, the Red Cross, local and international NGOs for the success of this operation.

“It may be recalled that when the first batch of 21 Girls were released in October last year, the President directed the security agencies to continue in earnest until all the Chibok Girls have been released and reunited with their families.

“The President has been receiving full reports from the Director-General of the State Security Services at each stage of the process.”

Sources from the Nigerian Air Force on Saturday also confirmed that Boko Haram terrorists released about 82 Chibok girls, who are presently in Banki, Borno.

On the night of April 14, 2014, 276 female students were kidnapped from the Government Secondary School in the town of Chibok. Fifty-seven of the schoolgirls managed to escape over the next few months

In May 2016, one of the abducted girls, Amina Ali, was found and another was discovered later in the month, although parents expressed doubts as her name was not among those originally kidnapped. Twenty-one girls were freed in October last year, while one other was rescued the next month. Another was found in January this year. With the latest release of 82 more girls, a total of 164 girls have gained their freedom, while 112 are still in Boko Haram captivity.

It was gathered that the Air Component of Operation Lafiya Dole was making preparations for the airlifting of the girls first to Maiduguri, then to the Federal Capital Territory, Abuja, after which the girls would be reunited with their parents.

One of the sources, an NAF pilot involved in the North-East operations, who could not be named because he was not authorised to speak on the development, told one of our correspondents that the report was true.

“Yes, it is true that the Boko Haram (terrorists) released some of the girls today (Saturday) based on some negotiation terms. You recall that some of their leaders were badly hit (some) days back. The official quarters do not have much detail yet,” he said.

The NAF source added that the girls were currently undergoing some psychological and medical tests.

She, however, did not indicate the circumstances under which the girls were released, but attributed the development to “good leadership and a courageous Army.”

Onochie had earlier in the day posted another message in which she said the same Nigerian soldiers who ran away from battle during the administration of former President Goodluck Jonathan are now chasing Boko Haramterrorists under Buhari.

“The same Nigerian soldiers who ran away like chickens under Jonathan are roaring like lions, chasing BokoHaram. It’s all about leadership,” she wrote.

The Defence Headquarters, Abuja, on the other hand, said it had yet to verify the information.

The Director, Defence Information, Maj.-Gen. John Eneche, said, “I do not have that information yet. When it comes to us, we will definitely get across to you.”

The Director, Army Public Relations, Brig.-Gen. SaniUsman, could not be reached for comments as he did not respond to several calls made to his telephone.

Similarly, the Director of Public Relations and Information, Air Commodore Adesanya, said he had yet to receive the details of any group of freed Chibok girls.

He said, “I will carry out my findings and get back to you. But I presently don’t have such information.”

However, the Chairman of the Chibok Community in Abuja, Tsana Abana, while confirming the release of the girls to one of our correspondents, added that the girls would be moved to Maiduguri on Sunday (today).

“It is true. I spoke with a top government official in Borno. He said 82 girls had been released on Friday but that there are some logistics going on, and that is why the news was delayed. The girls are still in Banki and they would be moved to Maiduguri tomorrow (Sunday),” Abanastated.

Also commenting on the report of the release of the girls, the President of the Chibok Youth Community who is also a member of the #BringBackOurGirls movement, Moses Zakwa, on Saturday night said the Chibok community was eager to hear Federal Government to make a formal announcement on the girls’ return, pointing out that the news called for celebration.

“We found the news to be a good one but we can’t jubilate yet. We are awaiting a formal announcement from the Federal Government that the girls have been released. If the news turns out to be true, we will celebrate. We have heard the report and a lot of people are wondering if the report of the girls’ release is true or not. The Chibokcommunity in Abuja are ready to welcome the girls. It is cause for celebration; we have to rejoice.

“The BBOG movement too will mobilise its members. We can only hope that the report is true. It calls for a huge celebration — that our lost girls have been found. Everyone has been calling to find out if it is true. We are waiting; we are hopeful to see the girls again,” Zakwa said.