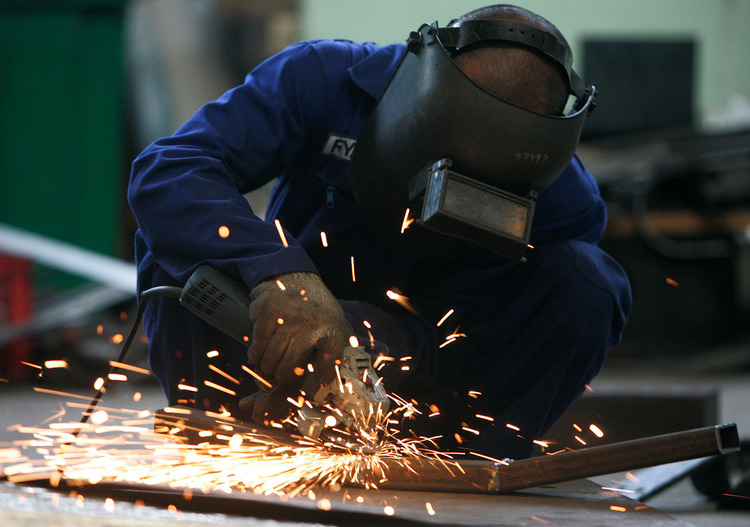 U.S. industrial output improved slightly in September, suggesting struggling manufacturers may be finding their footing in the second half of the year.

Industrial production—a measure of output at factories, mines and utilities—rose a seasonally adjusted 0.1% in September from August, the Federal Reserve said Monday. Economists surveyed had forecast a 0.2% increase.

Overall manufacturing output, which accounts for more than three-quarters of all industrial production, rose 0.2% last month. Total factory production has increased in three of the past four months, but was flat in September from a year earlier.

Mining production rose 0.4%, its fourth rise in the past five months. The segment, which includes oil drilling, had been battered by a sustained drop in commodity prices. The latest figures suggest the energy sector has stabilized. Still, overall mining output remains 9.4% below its level from a year earlier.

Utilities output was down 1% from the prior month.

Capacity utilization, a measure of how much industries are making as a share of potential output, rose 0.1 percentage point to 75.4%. Economists had projected 75.6%. Last month’s rate was 4.6 percentage points below the long-run average, suggesting there’s still ample slack across the economy.

The factory sector has struggled through much of the year amid weak business spending and an uncertain global outlook. The retrenching energy industry removed a key source of domestic demand for steel, equipment and other manufactured products. Meanwhile, a relatively strong dollar made U.S. goods more expensive overseas.

Other recent data also suggests those effects are fading. A separate gauge, the Institute for Supply Management’s manufacturing index, increased to 51.5 in September from 49.4 in August. The figure indicates the sector snapped back into expansion mode last month.

Improving industrial output could aid an acceleration in broader economic growth. Weak business investment has held back economic gains the first half of the year. Better manufacturing production could help offset a slowdown in spending growth from consumers.

During the second quarter, GDP expanded at a 1.4% annual rate. The Federal Reserve Bank of Atlanta’s GDPNow model last week projected a somewhat higher third-quarter growth rate of 1.9%. A separate model produced by the New York Fed on Friday predicted growth at a 2.3% pace in the third quarter.

The Commerce Department will release its first official estimate for third-quarter GDP on Oct. 28.