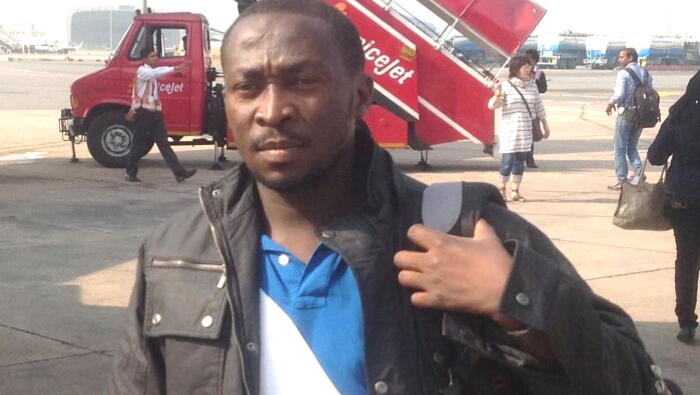 The Department of State Services has arrested Ahmed Salkida, a journalist, who was declared wanted by the Nigerian Army last month.

It was learnt that Salkida was arrested at the Nnamdi Azikiwe International Airport, Abuja, on Monday afternoon shortly after his flight landed.

The suspect, who is based in Dubai, is one of the three persons declared wanted for their alleged link to Boko Haram.

Salkida, a female lawyer, Aisha Waliki; and Ahmed Bolori were declared wanted by the military after Boko Haram released a video showing some of the Chibok girls it abducted on April 14, 2014.

A security operative, who spoke to one of our correspondents on condition of anonymity on Monday, said, “When we declared him wanted, he said he was willing to return to Nigeria but only on the condition that we send him a flight ticket.

“His Nigerian passport had expired but the Federal Government instructed the Nigeria Immigration Service not to issue him a new passport because he could run away after getting the passport. So, he was given an Emergency Travel Certificate, which allows the holder to travel only to his country of citizenship.

“With nowhere to run to, he had no choice but to return. So, immediately he boarded the plane from Dubai, we started waiting for him at the airport.”

It was learnt that the suspect had been taken to the office of the DSS, where he would be debriefed.

It was unclear if he would be transferred to the Nigerian Army’s custody.

The Acting Director, Army Public Relations, Col. Sani Usman, told one of our correspondents that he had not got any information that the Directorate of Military Intelligence had arrested Salkida.

He however promised to call on the development whenever he got information on the issue.

Meanwhile, no fewer than 1,500 members of Boko Haram have surrendered to Nigerian troops in the troubled North-East.

Investigations revealed that some of the Boko Haram members surrendered to troops at Buni Yadi, Yobe State, last week while others surrendered at various battle fronts in Borno State.

It was learnt that those who surrendered to security forces recently were over 700, bringing the total number of those who had surrendered between April 2015 and August 2016 to 1,500.

The Acting Director, Defence Information, Brig. Gen. Rabe Abubakar, who confirmed the figure on Monday, had earlier said 800 of the insurgents surrendered to security forces in April 2016.

Abubakar said the 700 insurgents, who surrendered recently, were undergoing security profiling and documentation.

He said the military was encouraging the Boko Haram fighters to abandon their struggle and surrender to security forces.

Abubakar said, “In the North-East, the operation is going on well and so many Boko Haram fighters have been suffering.

“For now, over 1,500 have surrendered to troops. It used to be 800 but because of the increasing number of those who are surrendering, we have over 1,500.

“I believe so many of them will come out too and we are encouraging them to come out, they shouldn’t continue to suffer.

“We are encouraging those who are still hiding to come out and abandon their unholy struggle. They are undergoing proper security profiling and documentation.”