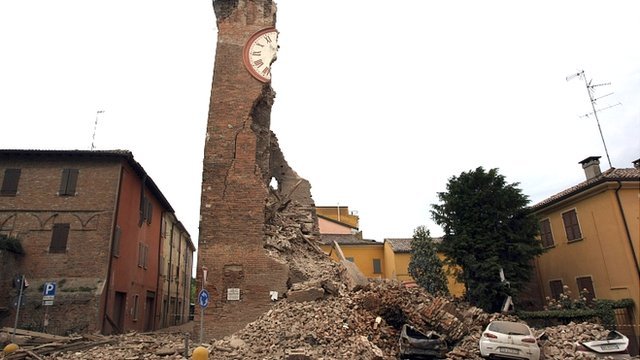 At least 21 people have died as a result of the 6.2-magnitude earthquake, according to CNN affiliate Rai, all in three badly-affected villages in a mountainous area of central Italy. Ten people were killed in the village of Pescara del Tronto, six in Accumoli and five in Amatrice, Rai reported.

The earthquake hit 10 kilometers (6.2 miles) southeast of Norcia at 3:36 a.m., the United States Geological Survey said. Its tremors rattled Rome — about 100 miles away.

‘Town is no more’

In Amatrice, in the north of Italy’s Lazio region, the town has been left in ruins.

“The town is no more,” Mayor Sergio Pirozzi told the affiliate. “I have an appeal to make: we have access roads to the town cut off and people under the rubble, help us.”

He said there was no power, and it was crucial for rescue crews to get to the town.

Rescue workers called Amatrice residents’ cellphones, and tried to get to those who answered, the affiliate reported. If there was no answer, rescuers moved on to the next person.

The mayor of nearby Accumoli, Stefano Petrucci, told Rai that newer buildings were the most damaged, while some of the more historic buildings suffered less damage.

“We’re digging, digging… hoping to find someone alive,” he said.

While the number of people trapped under the rubble is unknown, rescuers are focusing on finding survivors, said Fabrizio Curcio, head of Italy’s civil protection.

Tommaso della Longa, a spokesman for the Red Cross, said the images coming out of Amatrice are grim.

“The picture we got from our delegate in Amatrice are telling us a terrible story of a small city almost completely destroyed,” he said. “The situation is difficult at the moment.”

The priority is to find survivors, he said.

“These areas are in central Italy and are in middle of mountains and valleys,” he said. “There are small houses in the middle of the valley that are completely alone and they need help. It’ll take some time to reach them.”

Amatrice is known for its traditional all’amatriciana pasta sauce, and was gearing up to hold a festival celebrating the recipe this weekend.
‘Lasted for at least 30 seconds’.

Charlotte Smith, coach of Elon University women’s basketball team in North Carolina, was in Rome with her players when the quake hit.

“It lasted for at least 30 seconds. The entire hotel was shaking,” she said. “I went down to the lobby and there were a lot of people waiting there. … Then an earthquake happened 30 minutes later.”

She said their flight is still on schedule to leave for the United States later Wednesday.

Michael Gilroy was on the second floor of a three-story building in Montepulciano when the earthquake hit. It sent them fleeing into the night

“It felt like the bed was on rollers,” he said.

“It was initially very confusing. I’m from California and had a sense of what it may be. And we ran out to the main area and the chandelier was swaying back and forth. At that point, we knew we had to get out of the building as fast as we can.”

Gilroy, his girlfriend and other hotel guests waited outside in a clear area.

“We’re going to wait for daylight and see what happens from there,” he said.

About an hour after the earthquake, a 5.5-magnitude aftershock hit near Norcia, one of several that followed.

“At that shallowness and magnitude of 6.2, we’re going to expect lots of aftershocks for next several hours and maybe the next several days,” said Jessica Turner of the USGS.

Landslides are likely because the earthquake struck in a mountainous area, she said.

Although the extent of damage and injuries was not immediately clear, the earthquake could be devastating.

“Overall, the population in this region resides in structures that are a mix of vulnerable and earthquake resistant construction,” the USGS said.

It described the buildings as un-reinforced brick with mud and concrete frame with infill construction.

The Italian Civil Protection has mobilized three helicopters, six vehicles and a mobile convoy to the affected areas. It plans to set up mobile medical or triage units.

It said the biggest damage appears to be in Amatrice and Accumoli in Lazio region, and the Umbria and Marche regions.