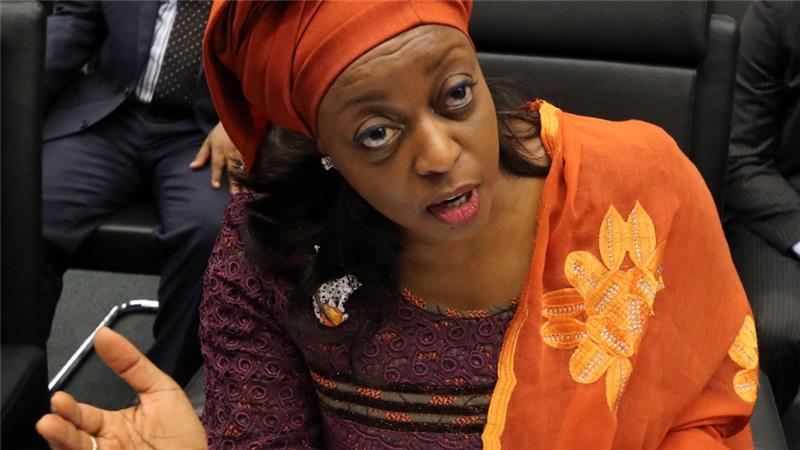 In a statement, supported by letters from the Nigerian National Petroleum Corporation (NNPC) to the former minister when she was in office, which was issued in Abuja through her spokesman, Mr. Clem Aguiyi, Alison-Madueke rejected reports attributed to the probe in the House of Representatives on the oil swaps claiming that she granted an “extension” instead of approval for the renewal of the contracts for the swaps.

She described the latest attack on her person as a fabricated tissue of lies deviously concocted to sustain the escalating evil narrative against her person.

Recalling the events and putting the facts in proper perspective, the former minister who spoke through Aguiyi insisted that what she gave were “approvals for renewal of contract for first, a one-year term each for Messrs Trafigura Beheer BV and Messrs Society Ivoirienne de Raffinage (SIR) in August 2010 and then for a two-year term in August 2011 for the same companies”.

The NNPC subsidiary, Duke Oil, was given approval for a one-year term in January 2011, while two other approvals were consequently sought by the group managing director of NNPC – the first of these on the 29th August 2014 was seeking to ratify all three aforementioned approvals which had apparently variously expired during the course of 2013, the statement said.

“In view of the criticality of the situation, the former minister immediately approved/ratified all three renewals. Expiration of those terms were put at 31st December 2014, following assurances to the former minister that the contractual obligations of the parties to NNPC had in fact been fully met, despite the regrettable lapse in renewal time,” it added.

Alison-Madueke, in the statement, revealed that the said lapses in expiration to renewal dates were seven months for Duke Oil, 10 months for SIR and 12 months for Trafigura.

“Secondly, on the 28th of October 2014, following the recommendation of the then GMD, NNPC, the minister approved OPAs for a new term of two years commencing from 1st January 2015.

“The entities recommended by NNPC were Sahara Energy Resources Ltd, Aiteo Energy and Duke Oil. NNPC strongly recommended and outlined the benefits of the OPAs over the SWAPs and put forward the case for migration from the OPAs and crude exchange (swap) contracts to OPAs fully.

“NNPC posited that the ‘experienced benefits of the OPAs to the federation’ would be much greater. All approvals were due process-driven and were only given by the former minister following formal statutory written requests, which contained the technical basis for the renewal and were sent to her by the GMD, NNPC, as is the normal practice.

“NNPC had clearly requested for the approval of the former minister for renewal of the crude oil for refined products exchange agreement and renewal of the offshore processing agreements on all the various occasions outlined earlier in this press release.

“Whereas, it was the former minister’s responsibility to either give or refuse approval, it was not within her purview as minister to draft, initiate or conclude the processes of signing the final contracts, as it is the statutory responsibility of NNPC to ensure that all technical areas are duly covered and all requisite due process parameters are duly implemented,” the statement noted.

According to her spokesman, “There would have been little need to respond to this particular issue at this time considering that the former minister is still indisposed and would have wished to be left alone to recuperate.

“She will speak for herself in due time. It is nevertheless imperative that records are set straight so that Nigerians and posterity will know the truth.

“Mr. (Austin) Oniwon (former GMD, NNPC) was right when he stated that the 445,000 barrels of crude oil for domestic refining is the property of NNPC, bought from the Federal Government of Nigeria at the prevailing rate and therefore as GMD, he did not need the Federal Executive Council’s or presidential approval to enter into swap arrangements that will enable NNPC fulfill its statutory obligations.

“It was also correct that contrary to the picture being painted in the media not more than 210,000 bpd out of the 445,000 bpd lifted by NNPC to ensure adequate supply and distribution of petroleum products was traded under the following swap arrangement: OPS – SIR – 60,000bpd; Swap – Trafigura – 60,000bpd; and swap – Duke Oil – 90,000bpd.

“What the GMD was required to execute of the above was the statutory approval from the minister for the companies! Refineries chosen by NNPC to participate in the swaps as outlined in Section 4 of the Petroleum Act and Section 20 of the NNPCAct.”

Continuing, Aguiyi said that it is incorrect to say that the former minister gave “approval for extensions” unless “extension” could legally be substituted for “renewal” because what Alison-Madueke gave (and the records are there) was approval for “renewal of contracts”.

“And these approvals were given based on the letters of request received from the GMD of NNPC,” he added.

“If indeed that was the case, then the former minister could not have been party to it, as she was not involved in either the preparation or the signing of NNPC contracts.

“She reaffirmed that she most certainly signed the second set of requisite approvals requested by NNPC for renewal of the contracts of both Messrs Trafigura Beheer BV and Messrs Societe Ivoirienne de Raffinage in August of 2011 for a two-year term.
“The former minister clearly fulfilled her statutory obligations by signing the request for approval for the renewals as and when presented to her.

“She noted that on the 29th August 2014, NNPC sought her approval for a new short contract ratification term that would expire on 31st December 2014.

“It became apparent that NNPC had failed to request for ministerial approval between late 2013 and August 2014 when the previous respective contracts had variously expired which meant that the various transactions had had no written contractual cover for the periods varying from seven to 12 months as follows:

“It must be noted that the corporation gave assurances to the former minister that it had assiduously upheld all its rights and performed its obligations as if a written contract existed during the periods mentioned, thereby ensuring the protection and safeguard of all national interest,” Alison-Madueke’s spokesman said.

He added that the former minister also took time to correct what she described as the erroneous impression being created by the media that she originated the OPAs and swaps.

“It is important to note that the crude oil swap arrangement predates the tenure of Mrs. Alison-Madueke as Minister of Petroleum Resources. All the Swap/ Offshore Processing arrangements currently in place and under her watch followed the same rigid template that was established by late Alhaji Rilwanu Lukman as Petroleum Resources Minister and approved by late President Musa Yar’Adua in 2009.

“The Yar’Adua administration had in 2009 signed a one-year term Offshore Processing Agreement with Nigermed Petroleum SA, a joint venture company between NNPC and British Petroleum International (BPI),” he disclosed.

According to her spokesman, “The OPA and Crude Oil for Product Swap were strategic arrangements/decisions reached by the NNPC and the federal government in 2009 in view of the down-time of the nation’s refineries.

“The arrangement was designed to help NNPC achieve an effective and robust petroleum products delivery option to the Nigerian public. Under this arrangement, it was the responsibility of NNPC to identify a crude oil trader and term contract holder who had affiliations with a refinery.

“The former minister’s role was limited to granting statutory approval to requests made by NNPC in this regard. The former minister never exceeded her powers nor did she take on the role of anyone else,” he added.