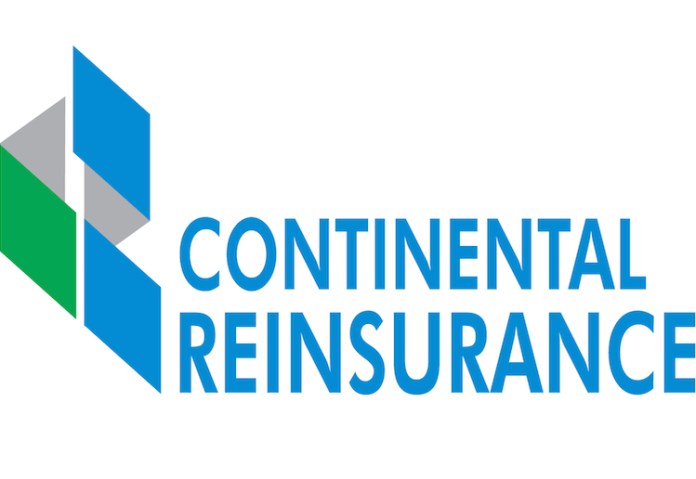 Continental Reinsurance Plc has announced Profit Before Tax of N2.92billion in 2015.

This represents 83.61 percent increase from N1.59billion profit reported by the company the previous year.

During the period under review, Gross premium income of the company stood at N19.7billion, up from N16.4billion in 2014.
The company’s Shareholders’ dividend payout also grew at an annual growth rate of 12% over the last five years.

Announcing this at the 29th annual general meeting of the company held in Lagos, Continental Re chairman, Nadia Fettah-Alaoui, stated: “We are pleased with our performance over the past year. I am confident that we have the right team that will continue to provide credible services to our clients.”

According to her, Continental Reinsurance currently operates from six strategic locations across Africa through a combination of regional and subsidiary offices.
She explained that although the contribution from the Lagos office grew by 10 percent year on year, its contribution to the Group constituted 54 percent of the total Non-Life business, in 2015 down from 60 percent in 2014.

This she said, reflects ongoing success in the company’s strategy to pursue growth in new territories thereby reducing concentration in the Nigerian market.
Speaking in the same vein, the Group Managing Director of the company, Dr. Femi Oyetunji, said management of the reinsurance firm had maintained a firm commitment to grow the company sustainably through volume growth, improved operational efficiencies, and development of critical skills.

According to him, “This bolsters our confidence in our optimism that we will continue to deliver top and bottom line growth on a sustained basis for our shareholders and other stakeholders.”

Oyetunji, thanked shareholders and Board members for their support adding that the company was in another challenging year, because of the poor economic performance seen in most African countries mostly due to low commodity prices and volatility from dollars interest rate.

He said in the insurance and reinsurance space, competition is steeper and that the excess capacity of Europe, the US and Asia is now targeting markets across Africa, adding that currency risk and regulatory risk have become top of mind issues.
Furthermore, he said that the Board and Management of Continental Re are finalising a strategic plan to strengthen the company, to ensure it increases its market share and continue to provide credible reinsurance security and services to clients and sustainable value to shareholders.

Continental Reinsurance also announced the second edition of the Pan-African Re/Insurance Journalism Awards. The competition, open to both English and French-speaking journalists, recognises the outstanding work of Africans who cover the insurance and reinsurance sector across the continent. It was launched in 2015. The winners of the first edition were announced during an award ceremony held in the Seychelles in April this year.