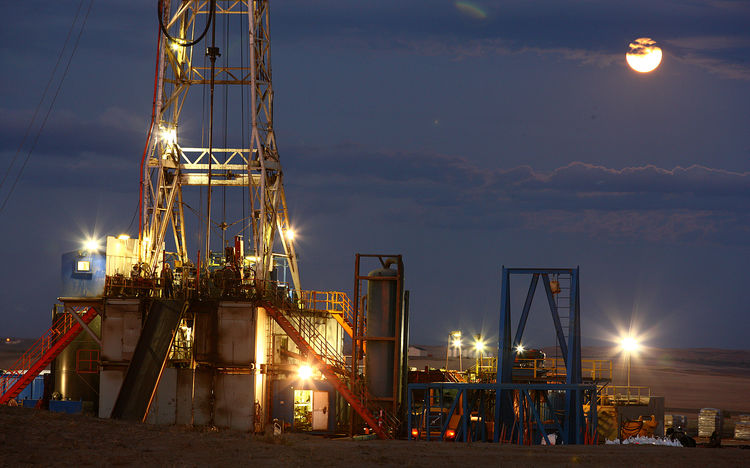 Nigeria earned about N3.549 trillion from the oil and gas sector in eleven months, between January and November 2015, according to data obtained from the Central Bank of Nigeria, CBN.

In an analysis of receipts in the Federation Account, the CBN, in its Monthly Economic for November 2015, said oil revenue accounted for 54.73 per cent of total federally-collected revenue of N6.484 trillion during the period, while non-oil revenue of N2.935 trillion made up 45.3 per cent.

Specifically, in November, the CBN said from the gross federally-collected revenue, a net distributable balance of N388.59 billion, excluding Value Added Tax and other transfers, was retained in the Federation Account. It added that the retained amount was distributed as follows: the Federal Government N191.99 billion; states N97.38 billion; and local governments N75.08 billion, while the balance of N24.14 billion, was shared among the oil producing states as 13% Derivation Fund.

It said: “In addition, the sum of N7.00 billion was distributed as Exchange Gain as follows: the Federal Government N3.46 billion; state and local governments N1.75 billion and N1.35 billion, respectively.

“The balance of N0.43 billion was distributed to the oil-producing states as 13.0 per cent Derivation Fund. Furthermore, the sum of N6.33 billion was received by the Federal Government in respect of the 15th equal installment refund by the NNPC.

“Overall, total allocation to the three tiers of government, from the Federation and VAT Pool Accounts, in November 2015, amounted to N459.71 billion, compared with N380.48 billion, in the preceding month.”

Continuing, the CBN said the N646.56 billion gross federally-collected revenue in November, was lower than the monthly budget estimate by 20.7 per cent, but exceeded the receipt in the preceding month by 35.2 per cent.

The CBN attributed the shortfall in gross federally-collected revenue relative to the monthly budget estimate to the decline in receipts from oil revenue during the review month.

Oil May Stay Low for Longer Than Expected – Lagarde

A Nervy Start to the Week

What could have been a really positive week for equity markets is off to a much more nervy start, with stocks in Europe treading water and US futures slightly lower.

The inflation report on Friday was red hot once more, extinguishing any hope that investors could hop aboard the Fed pivot train and ride stock markets higher into year-end. Perhaps it’s not quite so dramatic but it was a real setback, something we should be used to by now.

The wages component was the killer blow. That was not just a beat, it obliterated expectations and came in double the forecasted number. It may be a blip, but it’s a huge one and it will almost certainly take more than one much cooler report in January to comfort those that still fear inflation becoming entrenched.

That’s ultimately where we’re now up to in the inflation story. Many accept that base effects and lower energy prices will drive the headline inflation figure much lower next year, among other things, while a slower economy – maybe recession – will eventually hit demand and contribute to the decline. But what the Fed fears now is fighting entrenched inflation and these wage numbers won’t make for comfortable reading.

An economic victory for China amid gloomy PMIs

Chinese stocks were the clear outperformer overnight as authorities continued to work towards a softening of the country’s zero-Covid stance with the end goal seemingly being the end of it altogether. It’s thought that it will be downgraded to category B management as early as next month with officials claiming it’s less threatening than previous strains, a huge move away from the rhetoric and approach of the last few years.

This came as the Caixin services PMI slipped to 46.7, much lower than anticipated. That said, I’m not sure anyone will be shocked given the record Covid surge, but the more targeted – albeit seemingly confused – approach being taken has ensured less disruption, as evidenced by how much better the PMI has performed compared with earlier this year.

And it’s not just China that’s seeing surveys underperforming and, in many cases, putting in sub-50 readings. Europe is either already in recession or heading for it and the surveys highlight just how pessimistic firms are despite the winter getting off to a warmer start.

Japan is among the few recording a growth reading, although having slipped from 53.2 in October to 50.3 last month, you have to wonder for how long. Input prices are punishing firms, with some now raising prices in order to pass those higher costs on. That won’t help activity or convince the BoJ to declare victory, as higher energy and food costs are also hitting domestic demand. The one major outlier is India where the services PMI accelerated higher to 56.4 buoyed by domestic and external demand. An impressive feat in this global environment.

Oil prices are higher on Monday, rallying 2%, after the G7 imposed a $60 price cap on Russian oil and OPEC+ announced no new output cuts. Both bring a degree of uncertainty, with the details of the cap and the impact on Russian sales still unclear.

From the OPEC+ perspective, it can’t be easy to make reliable forecasts against that backdrop and the constantly evolving Covid situation in China, which currently looks far more promising from a demand perspective. The decision to leave output unchanged was probably the right one for now and there’s nothing to stop the group from coming together again before the next scheduled meeting should the situation warrant it.

It goes without saying that the jobs report on Friday was a big setback for gold as it leaves huge uncertainty around where the terminal rate will land. Of course, we should be used to bumps in the road by now, having experienced many already this year. There’s no reason why the path back to 2% should be any smoother.

But the yellow metal did recover those jobs report losses and even hit a new four-month high today. Perhaps the big difference now is momentum. It’s run into strong resistance around those August highs around $1,810 and simply doesn’t have the momentum it would have had the report been cooler. We’re now more than four weeks into the recovery rally in gold and a corrective move of some kind may be on the cards.

Bitcoin continues to enjoy a mild relief rally and has even moved above $17,000 to trade at its highest level in almost a month. It’s probably too early to celebrate yet though as these are very cautious gains that could be quickly and easily wiped out by more negative headlines related to FTX. Silence is currently bliss for the crypto community.