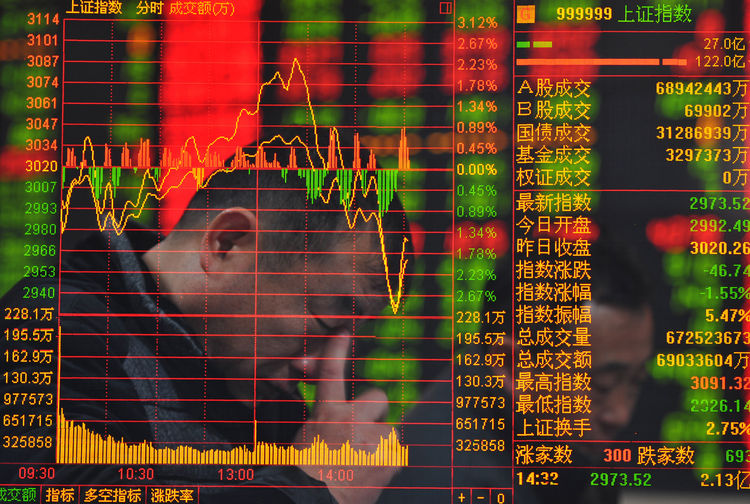 The global equity bear market deepened in Asia, with Japanese stocks suffering their worst week since 2008 amid anxiety over central banks’ ability to revive the world economy. European stock-index futures signaled gains as oil rose from a 12-year low.

The Topix index slumped 5.4 percent in Tokyo as traders returned from holiday, pushing the regional Asian benchmark toward its steepest weekly drop since gyrations in Chinese assets at the start of the year. The yen was set for its strongest two-week advance since 1998. U.S. index futures also flagged a rebound after losses there helped the MSCI All-Country Index cap a 20 percent slide from its May record.

“We’re in a moment where Peter Pan thinks he can’t fly any more,” said Ryuta Otsuka, a strategist at Toyo Securities Co. in Tokyo. “When everyone thinks they can’t fly, we’re doomed. There’s nothing we can do but to try and overturn that sentiment.”

Japanese Finance Minister Taro Aso said regulators will respond to market volatility if necessary after a move to negative rates failed to assuage anxieties last month. A stronger yen threatens to imperil the world’s third-largest economy through disinflation and lower profits for exporters. Investors ignored a second day of testimony from Janet Yellen, whose indication that the Federal Reserve won’t rush to raise interest rates failed to stem a selloff in riskier assets.

The MSCI’s Asia Pacific Index was down 2.8 percent as of 7:08 a.m. London time, on track for a weekly decline of 5.9 percent. The Topix has lost 12.6 percent this week, the most since October 2008. Nomura Holdings Inc. plunged 9.2 percent to the lowest level since December 2012. While Japan resumed trading after a Thursday break, markets in mainland China, Taiwan and Vietnam remain closed for Lunar New Year holidays.

Trading in South Korea’s Kosdaq exchange for smaller stocks was halted for 20 minutes after the benchmark gauge plunged more than 8 percent on concern valuations were excessive relative to earnings prospects. Celltrion Inc. slid 12 percent, paring its gain this year to 18 percent. The stock was among the 10 biggest gainers in Asia in 2015. Kakao Corp. tumbled 7.9 percent.

The yen gained 0.3 percent to 112.14 per dollar. Japan’s currency has strengthened at least 2 percent against all its 31 major peers since Jan. 29 amid demand for haven assets. Government officials expressed concern at the moves, fueling speculation Japan may intervene.

“The verbal intervention has already started, with Ministry of Finance officials talking about moves being rough, which looks like the new code word for undesired strength,” said Ray Attrill, co-head of currency strategy at National Australia Bank Ltd. in Sydney. “110 might be some line in the sand when the MOF will lean on the BOJ to shore things up.”

Oil rebounded amid the most volatile prices since 2009 as speculation swirls over whether producers will act to bolster the market. Futures climbed as much as 5.9 percent and were recently up 4.1 percent.

Gold retreated 0.4 percent after a 4.1 percent surge on Thursday. Bullion is set to climb 5.9 percent this week, the most since 2011, as investors flee a bear market in global stocks, a weakening dollar and the fallout from negative interest rates. Nickel rose 0.9 percent after slumping 3.6 percent on Thursday to the lowest close since 2003.

With the recent hike in the prices of oil at the international markets, the delegates of the Organisation of Petroleum Exporting Countries (OPEC) have canvassed for a steady oil production output.

This is coming a few days before the Joint Ministerial Monitoring Committee of the organisation would meet to deliberate on the demand and supply chain of crude oil in the global space.

The meeting of the Advisory Committee of Ministers is said to hold online as top OPEC officials continue to push for unchanged oil production levels.

Investors King reports that there has been an uncertain recovery in global demand for oil as international oil prices had climbed in the past two weeks.

It was gathered that Saudi Arabia and its partners are planning to hold a review of output levels on February 1, 2023 after agreeing significant cutbacks late last year to keep world crude markets in balance.

While awaiting clarity on the recovery in consumption in China and the impact of sanctions on Russian supply, the delegates said they expected the Ministers not it tamper with the output.

The Opec+ is embracing conservative stance even China, the biggest oil importer in the world battles devastating effects of COVID-19 pandemic.

Also, Opec+ is expecting the full impact of European Union sanctions on member-country Russia over its invasion of Ukraine.

Analysts at Eurasia Group have said, in a report, that there are possibilities of Opec+ maintaining the status quo beyond next week’s meeting.

According to the report, prices of oil have stabilised while there are significant levels of uncertainty surrounding both supply and demand.

It was gathered that feedback from the top OPEC hierarchy would go a long way in forming the decision to hold steady or not.

The Secretary-General of petroleum exporting countries, Haitham Al-Ghais has expressed hope on the global economy as the nascent rebound in China is tempered by weakness in advanced economies.

For Saudi Energy Minister, Prince Abdulaziz bin Salman, Opec+ would be proactive and preemptive to keep markets in equilibrium.

The head of commodity strategy at RBC Capital Markets LLC, Helima Croft, said there were pointers that Saudi Arabia wants to adopt the policy of preemption and keep production constraints in place until there are clear indications that there is sufficient demand for additional supply.

Analysts at Goldman Sachs Group Inc. and Energy Aspects Ltd. revealed that Opec+ will only start to reverse its supply curbs, which were formally about 2 million barrels a day, and increase production in the second half of the year.

At this period, accelerating demand would have tightened the market.

Meanwhile, the 23-nation alliance is scheduled to meet at OPEC’s Vienna headquarters in early June to review production levels for other months in the year.

“Expectations that China’s fuel demand will recover in the second half of the year are growing and are likely to support market sentiment,” said Hiroyuki Kikukawa, general manager of research at Nissan Securities.

Analysts from the Bank of America Securities said the reopening of the Chinese economy after years of tough COVID restrictions could unleash a large wave of pent-up demand over the next 18 months.

On the supply side, volumes should remain steady for the medium term as the Organization of the Petroleum Exporting Countries (OPEC) and its allies, a group known as OPEC+, is expected to keep its output policy unchanged.

An OPEC+ panel is likely to endorse the producer group’s current oil output policy when it meets next week, five OPEC+ sources said on Tuesday, as hopes for higher Chinese demand are balanced by worries over inflation and the global economy.

OPEC+ in October decided to trim output by 2 million barrels per day from November through 2023 on a weaker economic outlook.

However, gains in oil prices were capped by a bigger-than-expected build in U.S. oil inventories that was reported after the market settled on Tuesday.

U.S. crude stocks rose by about 3.4 million barrels in the week ended Jan. 20, according to market sources citing American Petroleum Institute figures. That was triple the forecast for an about 1 million build in a preliminary Reuters poll on Monday.

Nissan’s Kikukawa, however, expects the build “to be temporary as the supply disruptions from a cold snap in the United States a few weeks ago would only impact data in the next couple of weeks”.

Official data from the U.S. Energy Information Administration will be released later on Wednesday.

Kikukawa expects WTI to trade in a range between $75 and $85 a barrel in the coming weeks.

Markets are also watching out for interest rate decisions from central banks for more trading cues.

“It seems that the absence of hawkish Fed comments from the current blackout period has removed a key overhang for risk sentiments for now, providing some renewed traction back into growth,” Yeap Jun Rong, market analyst at IG, said in a note.

Investors are waiting to see if the U.S. Federal Reserve will “react to recent downside surprise in inflation and growth” when it meets next week, the analyst added.

The Independent Petroleum Marketers Association of Nigeria, IPMAN has faulted the oil sector’s incapability to cater for the full fuel supply order of oil marketers nationwide.

Investors King learnt that the volume of products supplied to marketers dropped by 50 percent since July, 2022 which has worsened the fuel scarcity situation.

The Deputy National President of IPMAN, Zahra Mustapha, during a Television interview stressed that there is confusion in the nation’s oil sector.

Mustapha, who said the fuel subsidy issue is complex, explained that the federal government is overwhelmed by the burden of fuel subsidy which is not sustainable.

“The fact of the matter is that we are in a very complex situation because the burden of subsidy that the government is carrying is no more sustainable and the volume that the NNPC for now, being the sole importer of the petroleum product, PMS, has been hit hard, because of that the supply that we receive as the marketers at the loading point is being reduced by over 50 per cent.

Mustapha stated that the situation has been reported to the oil sector regulatory bodies and the oil marketers are expecting their actions.

He further lamented the high supply cost and transportation which makes them sell it at a much higher rate to the consumers.

“We are supposed to get this product at N148 but we are buying at N22o and it keeps increasing. 240 in Lagos, 235 in Warri, 240 in Port Harcourt, in Calabar it is as high as N250 per litre for marketers, and you buy and transport yourself to where your retail outlet is. We cannot buy the product between 220 to 240 naira, transport it for about N50, which is already N300, then expect the marketer to sell to the public for N200 or N190. It is not realisable.

“There are a lot of confusions in the industry, which the government must come in and address these confusions so that the common man can get the product for the approved price,” said Mustapha.