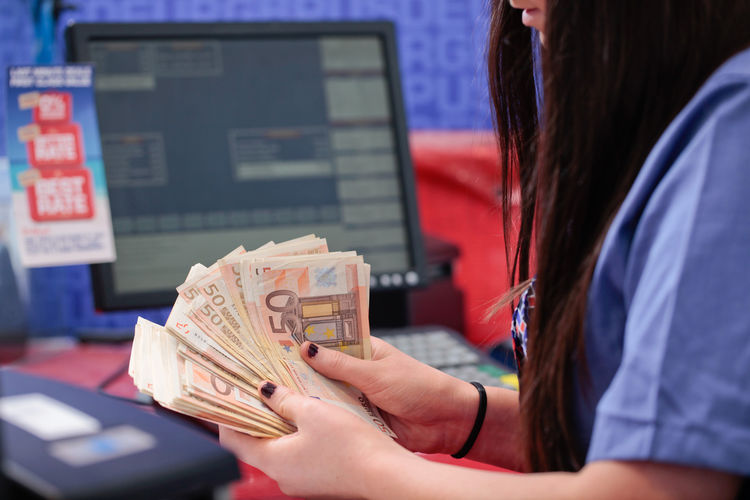 According to the report, in an effort to ease the pressure created by CBN decision to discontinue sales of Forex to BDCs, CBN is grooming Travelex as an alternative forex dealer to BDCs across the country.

He further stated that “Travelex has secured approval to open more offices across the country where dollar will be directly sold to banks, government and other end-users in a move to bridge the current supply gap of Forex in the economy.”

Gwadabe believed that even though Travelex is licensed as a wholesale supplier and forex importer into Nigeria, BDCs retail segment remains its intention. He insisted that the current move by the CBN will finally allow Travelex to take over the retail segment of the BDCs.

A CBN official, Ibrahim Mu’azu said “CBN’s decision to stop funding BDCs will create room for Travelex to do more  Forex retail business going forward, they have been in the market for a long time”

The general manager of Travelex Nigeria, Anthony Enwereji admitted that the fact that the company sells dollar at a very low rate is its advantage over the BDCs.

Naira Opens 2022 at N426.25 Against the United States Dollar at Official Forex Window

The Nigerian Naira opened the new year at N426.25 against the United States Dollar on Tuesday, January 4, 2022, at the official foreign exchange window managed by the FMDQGroup.

The local currency plunged to N435 against the US Dollar on Friday after the Central Bank of Nigeria (CBN) adjusted its Naira to Dollar exchange from N411 to N413.49. The adjustment is in line with Godwin Emefiele, governor of the CBN, statement that the country operated a managed-float exchange policy.

Naira pared losses against the US Dollar on Tuesday after forex traders, speculators and hoarders might have analysed CBN forex action and interpreted it as the usual adjustments.

At the unregulated parallel market known as the black market, the Naira plunged to N570 against the United States Dollar on January 4th, 2022. Despite the Central Bank of Nigeria (CBN) discouraging patronage at that section of forex, many Nigerians still relied on the black market for their forex needs.

However, the adjustment may not be unconnected to the change in Nigeria’s economic fundamentals. For instance, the nation’s foreign reserves used to back the Naira have been on a downward trend since hitting $41.8 billion on October 29, 2021. Presently, the reserves stood at $40.5 billion. This is despite oil prices trading at almost $80 a barrel, the highest in recent years.

But because of Nigeria’s inability to improve its production process, lower cost of production and generally increase crude oil output, it has failed to take advantage of the surge in oil prices. Therefore, the CBN adjusted Naira to Dollar exchange rate to reflect the nation’s economic reality of insufficient forex and also enable it meet demands.

Investors King will present the latest rate of the Dollar to Naira, both at the official market and the parallel market.

How much is the exchange rate of Dollar to Naira today?

Below is the performance of the Naira against the dollar, as recorded on Wednesday 22nd December 2021:

Dollar to Naira at the Black Market

On Wednesday, the black market saw the dollar being bought at a rate of N562 per dollar, and then sold at N565 per dollar.

Dollar to Naira at the Official Fx Window

The Dollar to Naira rate as at the close of business on Wednesday remained the same as the rate on Tuesday, settling at N415.10 per dollar, according to the Investors and Exporters window where the Naira is traded officially.

Wednesday’s opening saw the Dollar to Naira rate sit at N414.04 per dollar, but by Thursday the opening rate recognised a marginal rise to sit at N413.77 per dollar.

The Spot rate and Forward rate of the Dollar to Naira started to take shape again on Wednesday, returning to rates which for a long time were considered to be the usual for both rates.

The Spot rate traded at a very recognisable high of N404 per dollar, maintaining the low of N444 per dollar which it has seen for most, if not all of this week. The Forward rate has seen multiple fluctuations this week, unlike the Spot rate which has remained largely stable.

The official daily turnover of the dollar on Wednesday sat at $215.29 million, more than $100m lower than the turnover recorded on Tuesday.

Heading into the festive period, this week has been one of consistency for the Dollar to Naira at the official fx window. The Naira maintained a similar range this week in all its openings and closing, not going beyond N413 – N415 per dollar.