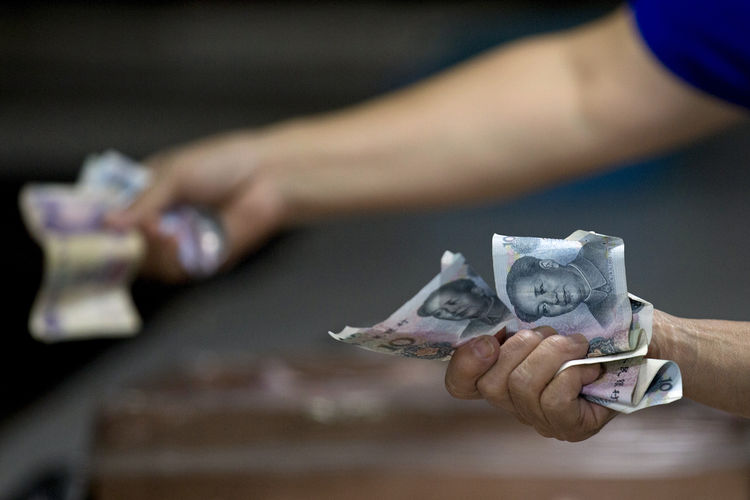 Chinese yuan fell to a four-year low after the central bank said the currency shouldn’t be measured by its moves against the dollar alone, a statement that is being interpreted as a sign it will allow further declines.

Exchange rates are a reflection of trade and investment with multiple countries and the market has to take into account the yuan’s fluctuations against a basket of currencies, the People’s Bank of China said on Friday. The China Foreign Exchange Trade System, which is run by the PBOC to facilitate interbank trading, published a new yuan index composed of 13 currencies, with the dollar accounting for 26.4 percent.

The yuan dropped 0.06 percent to close at 6.4591 a dollar in Shanghai, according to CFETS prices. It earlier declined to 6.4665, the weakest since July 2011. While the currency has retreated 3.9 percent against the greenback this year, it has advanced against 11 of 16 major currencies tracked by Bloomberg. The PBOC on Monday cut its reference rate by 0.21 percent to a four-year low of 6.4495.

“The latest move suggests the PBOC will allow weaker yuan fixings,” said Tommy Ong, managing director for treasury and markets at DBS Hong Kong Ltd. “The yuan is also under pressure as the U.S. is likely to hike rates this week.”

The central bank has lowered the reference rate, which limits the onshore currency’s moves to 2 percent on either side, on eight of the 10 trading days since winning reserve-currency status at the International Monetary Fund on Nov. 30. This fueled speculation that the authority is trying to release pent-up depreciation pressure before the Federal Reserve meets Dec. 15-16.

In Hong Kong’s offshore market, the yuan dropped 0.27 percent to 6.5497 a dollar as of 4:46 p.m. local time, extending a six-day decline to 1.6 percent, according to data compiled by Bloomberg. That took its spread to the onshore spot rate to 906 pips, above an average of 511 pips in the past month. The PBOC has been seen propping up the yuan’s exchange rate in Hong Kong periodically to narrow the difference.

The yuan’s one-month implied volatility, a gauge of expected price swings, surged 68 basis points on Monday to 6.72 percent, according to data compiled by Bloomberg. It earlier rose to 6.76 percent, the highest since August.

“With the wider spread between onshore and offshore yuan, the intervention risk in the offshore market is now higher and will be more likely to happen after the Fed meeting this week,” said DBS’s Ong.

The PBOC on Friday also released guidelines on free trade zones in the provinces of Guangdong and Fujian as well as Tianjin city, granting companies registered in the area up to $10 million in capital-account convertibility quotas. In the Guangdong zone, individuals can borrow yuan funds from Hong Kong and Macau for property purchases within the area, the central bank said.

The introduction of a multi-currency index helps guide the public view of the yuan’s exchange rate, which will contribute to keeping the currency “basically stable at an adaptive and equilibrium level,” the PBOC said on Friday. That reinforces other recent statements suggesting an increased focus on broader moves rather than just against the dollar, according to a Goldman Sachs Group Inc. note. It forecast that the yuan will weaken to 6.6 a dollar in a year.

Referencing the yuan to a list of currencies doesn’t mean the exchange rate is pegged to that basket, according to an article published on the PBOC website and written by an unidentified CFETS commentator. China’s ample foreign-exchange reserves and trade surplus should keep the yuan reasonably stable at a reasonable level, it said.

“This underscores how China’s authorities are increasingly looking at the currency in a much broader context, moving away from a focus on the dollar, and so too should market participants,” HSBC Holdings Plc analysts included Paul Mackel wrote in a note dated Dec. 12. “But this does not mean China is going to formally target a currency basket like Singapore does. We see the yuan at 6.50 by end-15 and 6.70 end-16, amid greater two-way volatility.”