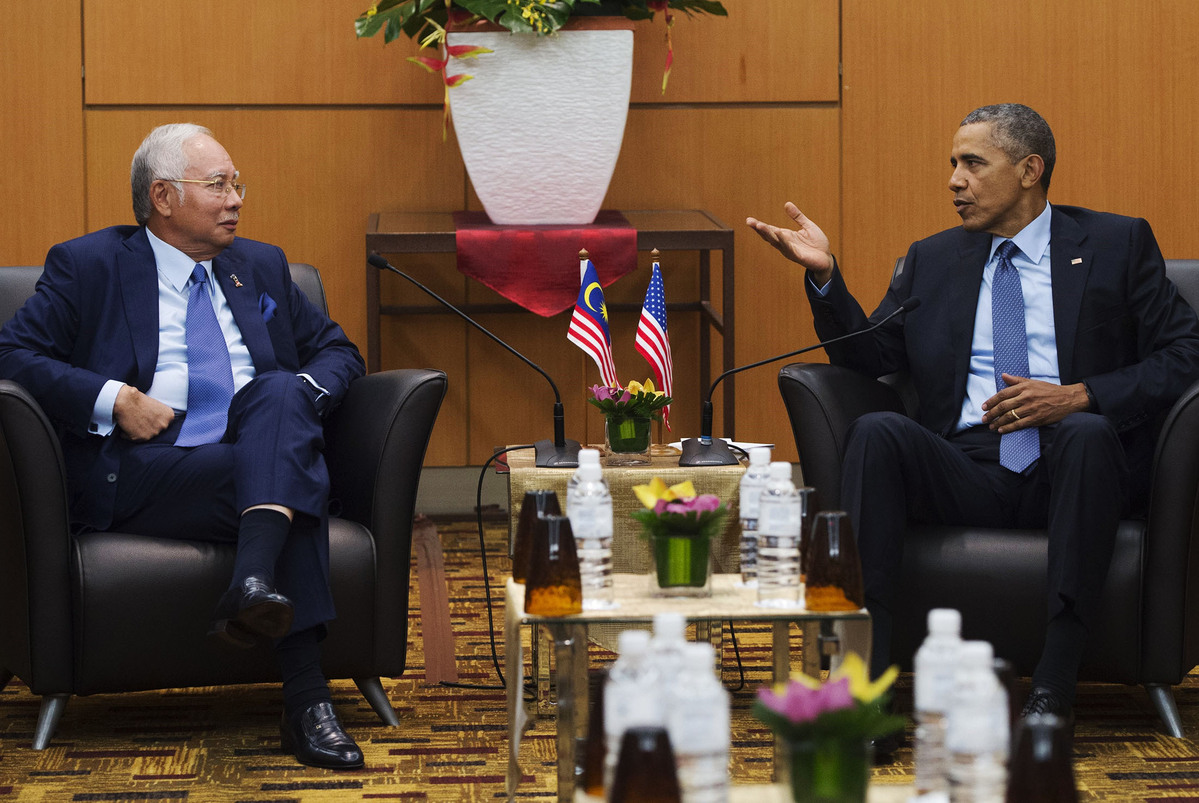 U.S. President Barack Obama’s meeting Friday with Malaysian Prime Minister Najib Razak stands out on a long list of his one-on-one talks with world leaders this week because the premier is under fire over a multi-million dollar funding scandal.

Obama could hardly skip a meeting with Najib, who is hosting Obama at the Association of Southeast Asian Nations summit, but it might not be a photo op the White House touts. While the two played golf in Hawaii last year, Najib now faces pressure to explain how 2.6 billion ringgit ($607 million) ended up in his personal bank accounts in 2013, and has cracked down on dissenters while using sedition laws to detain media executives.

Even as the two held a 45-minute meeting and posed for the cameras, Obama showed concern from the start of his three-day trip about what’s been going on in Malaysia. At his first appointment — a town hall event at a university — a relaxed, shirt-sleeved Obama told young leaders from the 10 Asean countries that he’d raise the issue of government transparency and press freedom with Najib.

“I was going to do it anyway, but now that I hear it from you, I’m definitely going to do it,” he told the audience. During the town hall he addressed issues ranging from climate change to inequality, U.S. political gridlock and the recent elections in Myanmar.

In his remarks after meeting Obama, Najib said Malaysia is “taking into account some of” the president’s views. “Malaysia is committed to reforms,” Najib said. “And we are committed to ensuring at the same time there is peace and stability.” The two also discussed Islamic State and terrorism, tensions in the disputed South China Sea and human trafficking.

Obama said the leaders talked about the importance of civil society — in Malaysia and the region more broadly. They discussed “how we can promote those values that will encourage continued development and opportunity and prosperity,” Obama said. “I very much appreciate this conversation.”

Najib has rarely answered questions from the media since the funding scandal broke in July, when the Wall Street Journal reported that about $700 million may have moved through government agencies and state-linked companies to his private accounts. Najib has denied taking money for personal gain.

Opposition lawmakers and some in Najib’s own party have asked questions over the funds, which reached his accounts before the 2013 general election. Najib has acknowledged the money but said it was political donations from the Middle East, an initial conclusion also reached by the anti-corruption commission.

The accounts have since been closed. The receipt of political funds was to meet the needs of the party and the community and wasn’t a new practice, the official Bernama news agency has said, citing Najib.

The scandal has fueled political tensions with Najib firing his deputy in July, while thousands of anti-government protesters rallied in the capital in August. The imbroglio has unnerved foreign investors in Southeast Asia’s third-largest economy, contributing to a sell-off last quarter in Malaysian markets.

Malaysia is one of the 12 nations in the Trans-Pacific Partnership trade pact, which has been a key element of Obama’s security and economic rebalance to Asia. The U.S. has also been working with Malaysia on countering terrorism, the importance of which was highlighted by last week’s attacks in Paris and Friday’s hostage-taking in Mali.

“Malaysia like Indonesia are majority Muslim countries that represent tolerance and peace,” Obama said. “Malaysia’s willingness to host a center that uses all the tools of social media with scholars and clerics to counter” extremism is important, he said.

“Malaysia is part of the coalition to fight ISIL and has been particularly helpful on issues like countering the destructive and perverse narrative that’s developed.”

The Southeast Asian nation has arrested dozens of suspects who authorities said were plotting attacks in the country or linked to Islamic State. Some have been arrested upon their return from Syria.

Earlier this week Najib said he was “shocked and sickened” by the murder of Malaysian engineer Bernard Then, who was beheaded by the Abu Sayyaf Islamic militant group in the southern Philippines. Then was the first Malaysian hostage to be beheaded by the group.