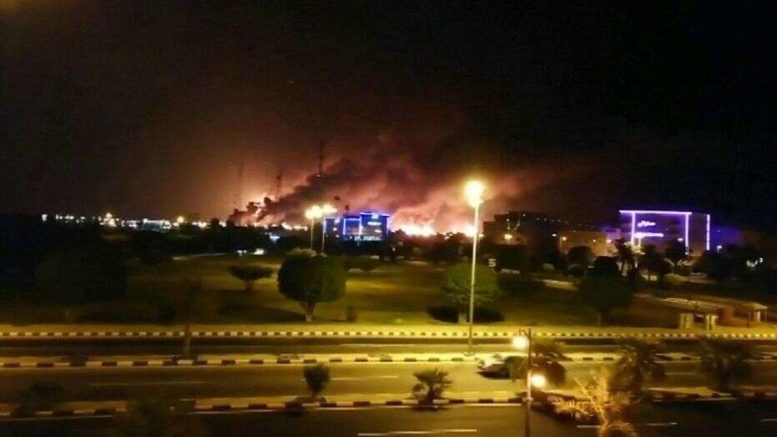 Abqaiq plant, Saudi Arabia’s largest crude oil processing plant, was attacked by ten drones in the early hours of Saturday, according to a person familiar with the situation.

“Abqaiq is the heart of the system and they just had a heart attack,” said Roger Diwan, a veteran OPEC watcher at consultant IHS Markit. “We just don’t know the severity.”

Apart from the previous production cut, the kingdom is now expected to cut as much as 5 million barrels per day in crude oil production.

Again, while Saudi Aramco would be able to sustain export by drawing from its global storages in Rotterdam in the Netherlands, Okinawa in Japan, and Sidi Kerir on the Mediterranean coast of Egypt, oil price is expected to jump on Monday as 5 million barrels drop in Saudi Arabia’s current production level of 9.8 million barrels per day would hurt its future capacity to export.

“For the oil market if not global economy, Abqaiq is the single most valuable piece of real estate in planet earth,” Bob McNally, head of Rapid Energy Group in Washington.

On Wednesday, OPEC lowered global oil demand for 2020 by 60,000 barrels per day, saying rising US oil production would hurt the cartel efforts at balancing oil price in 2020. But with Saudi Arabia more than 50 percent below capacity,  oil outlook is likely to improve despite the trade war between the US and China.

Yahya Saree, the spokesman of Houthi, Yemen, said the attacks on the world’s largest crude oil processing plant was carried out with 10 drones.

He, however, said: “Our upcoming operations will expand and would be more painful as long as the Saudi regime continues its aggression and blockade.”

Be the first to comment on "Saudi’s Biggest Oil Plant on Fire, Attacked by 10 Drones"

NNPC Commissions Audit of Refineries The processes and processing units of Nigeria’s three refineries in Kaduna, Port Harcourt and Warri are currently being audited by…