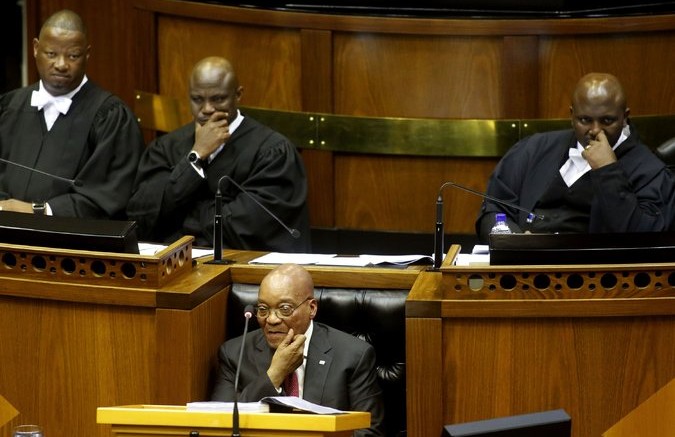 South Africa’s president, Jacob G. Zuma, sat down on Thursday after his state of the nation address in Cape Town was disrupted.Pool photo by Schalk Van Zuydam

JOHANNESBURG — Weakened by scandal and policy missteps, South Africa’s president, Jacob G. Zuma, pledged in a state of the nation address on Thursday to revive the country’s economy and cut excessive spending. But the speech was delayed and repeatedly interrupted by rivals who angrily demanded his resignation.

In a sober address that experts had considered critical to shoring up his presidency, Mr. Zuma focused largely on the stagnant economy, and on repairing some of the recent damage caused by what some see as his mishandling of the finance ministry.

Analysts say that South Africa’s economy, Africa’s second largest and its most sophisticated, could slip into a recession because of government mismanagement, severe drought and the economic slowdown in China.

Jacob Zuma, South African Leader, to Repay Part of Money Spent on His HomeFEB. 3, 2016
Acknowledging that the country’s government debt was at risk of being downgraded to junk status, Mr. Zuma highlighted measures — including policies to facilitate investment, streamline state enterprises and pursue nuclear energy — that were clearly designed to fend off such a move by credit agencies.

Mr. Zuma did not directly address a longstanding spending scandal involving his private residence that has now reached the nation’s highest court. Yet Mr. Zuma seemed to be trying to assuage public anger over the issue by announcing steps to cut unnecessary government spending.

Mr. Zuma, in his ninth state of the nation address since taking power in 2009, faced the country and Parliament more humbled that he has ever been. In the days leading up to the address, Mr. Zuma, who has typically handled his critics by mocking them, made a point of listening to South Africans: meeting with business leaders in Cape Town and talking to drivers and customers at a taxi stand in Pretoria.

During Mr. Zuma’s address on Thursday, opposition lawmakers demanded that he explain his firing in December of a well-respected finance minister who had clashed with one of Mr. Zuma’s closest allies, and replacing him with a little-known lawmaker. It was a decision that further eroded investors’ confidence in the country’s economy and the health of its institutions.

Mr. Zuma reversed himself a few days after the initial firing by firing the new minister and reappointing a former finance minister.

The reversal, which further weakened the South African currency, the rand, and placed the nation at greater risk of a credit downgrade, is believed to have eroded Mr. Zuma’s standing within his own party, the African National Congress, and in business circles close to it.

On Tuesday, the Constitutional Court, the nation’s highest, heard arguments from two opposition party lawyers that Mr. Zuma had acted illegally by defying an order to pay back part of expensive upgrades to his private home in Nkandla in KwaZulu-Natal Province. The court has yet to rule on the case, which for many has come to symbolize widespread corruption inside the A.N.C., the party that has held power since the end of apartheid in 1994.

Mr. Zuma’s lawyers said in court that he was prepared to repay part of the money, reversing years of refusals to do so. During last year’s address, a fight broke out between security guards and rivals who demanded that Mr. Zuma “pay back the money.”

But opposition parties are now seeking a court ruling that the president violated the Constitution, in a bid to start impeachment proceedings against him. Any impeachment attempt would likely fail, given Mr. Zuma’s control of Parliament, but it could hurt his party in important municipal elections later this year.

Before Mr. Zuma’s speech on Thursday, Mmusi Maimane, the leader of the main opposition party, the Democratic Alliance, said in a statement that “South Africa continues to suffer from a leadership crisis, as the president hops from one scandal to the next, all to protect himself and his cronies.”

“The president should himself expedite the process of his removal from office by doing the honorable thing and resigning,” Mr. Maimane said.

“Zuma is no longer a president that deserves the respect from anyone,” the party’s leader, Julius Malema, yelled as he and his members were eventually expelled from the parliamentary chamber.

“He has stolen from us, he has corrupted the economy of South Africa, he has made this country a joke and after that, he has laughed at us.” 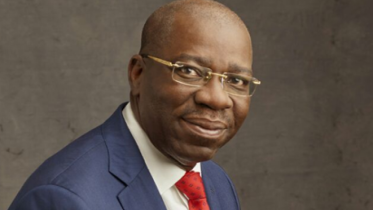