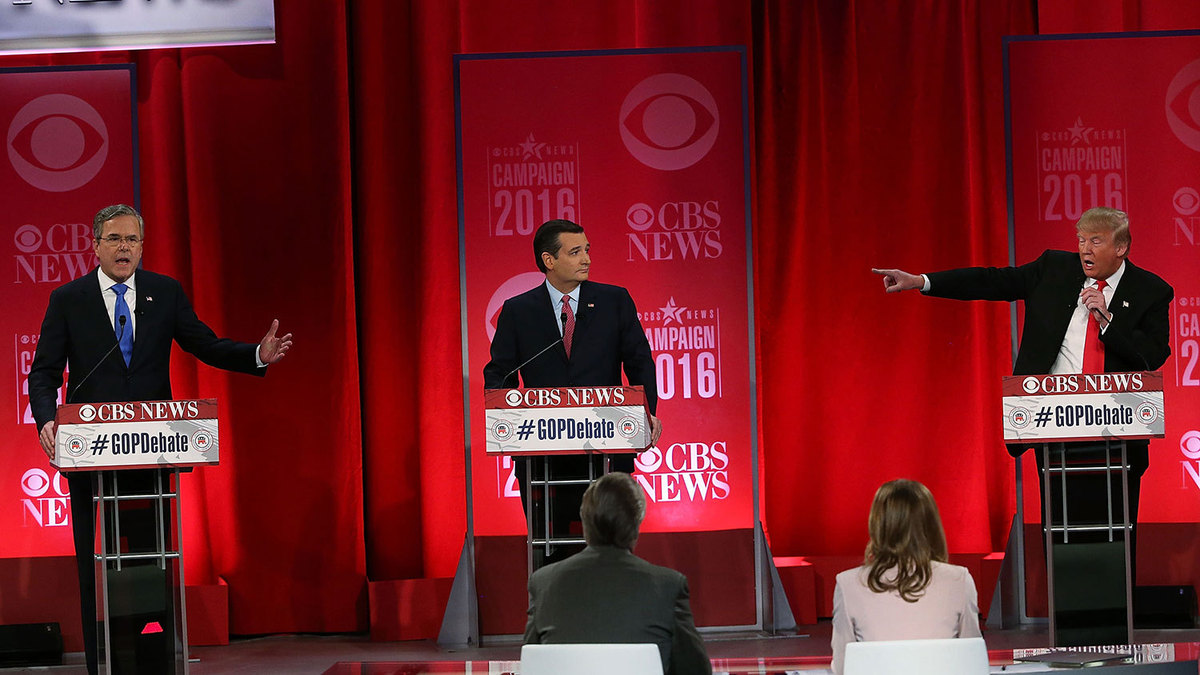 The ninth debate featured just six candidates, including an even louder than usual Donald Trump, who blamed former President George W. Bush for the 9/11 attack, a not-so-indirect hit at the candidacy of former Florida Governor Jeb Bush.

Senator Marco Rubio of Florida joined the fray, saying the president most to blame for the terrorist attack was former President Bill Clinton — husband of Democratic frontrunner Hillary Clinton — because he missed a chance to kill Osama bin Laden in the 1990s.

“The World Trade Center came down because Bill Clinton didn’t kill Osama bin Laden when he had the chance to kill him,” Rubio said.

Coming just a week before the South Carolina primary, the debate featured some of the most intense personal attacks between the candidates, with Rubio accusing Texas Senator Ted Cruz of lying and carrying out dirty tricks on the campaign trail. Ohio Governor John Kasich said the bitter sniping risked throwing the election to the Democrats.

“I think we’re fixing to lose the election to Hillary Clinton if we don’t stop
this,” he warned.

Cruz said Trump was a longtime backer of legal abortion, including partial-birth abortion, as well as European-style socialized health care.

“You are the single biggest liar,” Trump said to Cruz. “You probably are worse than Jeb Bush.”

Trump added: “Nasty guy. Now, I know why he doesn’t have one endorsement from any of his colleagues.”

The stakes of the election were highlighted just hours before the debate with news of the death of the conservative justice, making appointments to the high court no longer a theoretical issue in the 2016 campaign.

Even before taking the stage, Rubio and Cruz said the next president, rather than Democratic incumbent Barack Obama, should name Scalia’s successor.

Obama said Saturday he plans to fulfill his constitutional duty and nominate a replacement for Scalia. Senate Majority Leader Mitch McConnell, a Republican, said he will block a vote this year.

Trump, a billionaire real estate mogul, said he fully expects Obama to nominate someone and called on the Senate to stop it. “I think he’s going to do it whether I’m OK with it or not. I think it’s up to Mitch McConnell and everybody to stop it. It’s called delay, delay, delay,” Trump said.

Cruz said Scalia’s passing “underscores the stakes of this election,” adding that the nation is “one justice away from a Supreme Court that will strike down every restriction on abortion adopted by the states.”

Kasich said it was unfortunate how quickly the death of Scalia turned political, and said Obama could nominate someone who could be approved unanimously.

“It’s not even two minutes after the death of Justice Scalia. I just wish we hadn’t run so fast into politics,” Kasich said. “The country is so divided right now and we’re going to see another partisan fight take place.”

Debate moderator John Dickerson of CBS News opened the debate with a moment of silence for Scalia.

During a discussion about how the U.S. should deal with Russian President Vladimir Putin, Trump was booed repeatedly after saying that Bush was “wrong” in his statements about the billionaire’s views.

“That’s Jeb’s special interests and lobbyists talking,” a more combative Trump said after the boos. “I only tell the truth, lobbyists.”

Bush countered that Trump gets his foreign-policy views “from the shows,” a reference to Sunday morning news programming. The back-and-forth got nastier from there.

“It’s blood-sport for him,” Bush said. “While Donald Trump was building a reality TV show my brother was building a security apparatus to keep us safe.”

Trump shot back, “The World Trade Center came down during his reign. Remember that.”

Bush went on to say, “My mother is the strongest woman I know.”

Trump replied: “She should be running.”

Kasich and Bush tussled over Medicaid expansion, which was a key part of Obama’s health care plan. Kasich, who pushed through an expansion in his home state despite objections from Republican legislative members, said his changes saved prison costs by helping the drug addicted and mentally ill.

Bush interrupted, saying Kasich is “creating further debt on the backs of our children and grandchildren” by expanding Obamacare in Ohio. “We should be fighting Obamacare, repealing Obamacare, replacing it with something totally different,” he said.

After leaving New Hampshire with a decisive victory — his first — Trump enjoys an even more comfortable lead in early polling in South Carolina, a state where politics is known as blood sport.

The establishment candidates — Rubio, Bush and Kasich — are determined to make a stand in South Carolina in order to convince donors and supporters that they have a legitimate shot at winning the nomination, and stopping Trump or Cruz.

Republican leaders in the state have said they expect the debate to be closely watched by those trying to make their voting decisions before the Feb. 20 balloting.

Since 1980, the winner of the state’s Republican primary has gone on to become the nominee every time, with one exception. That was in 2012, when a pair of strong debate performances just ahead of the primary lifted Newt Gingrich to a first-place finish over eventual nominee Mitt Romney.

Before the debate shifted from Scalia, Rubio and Cruz both erred when explaining why Obama shouldn’t get to name a successor to Scalia.

“It’s been over 80 years since a lame duck president has appointed a Supreme Court justice,” Rubio said.

Cruz said: “We have 80 years of precedent of not confirming Supreme Court justices in an election year.”

In fact, the Senate confirmed Anthony Kennedy, a nominee of President Ronald Reagan, on Feb 3, 1988, during an election year.