The country is expecting over $25bn worth of investments in the gas sector, the Nigerian National Petroleum Corporation announced on Wednesday.

It also stated that policies that would put an end to the flaring of gas had been developed by the corporation, adding that gas flaring in Nigeria had reduced significantly from 25 per cent to 10 per cent in the last decade.

The Group Managing Director, NNPC, Maikanti Baru, stated these in different panel sessions at the ongoing 50th Offshore Technology Conference in Houston, United States, according to a statement issued in Abuja by the national oil firm’s spokesperson, Ndu Ughamadu.

While speaking at a panel session on new oil and gas horizons and procurement in Sub-Saharan Africa, Baru stated that huge opportunities abound in Nigeria’s gas sector, with the country expecting over $25bn investments over the next 10 years.

He described the Nigerian petroleum industry as the largest and most vibrant in Sub-Saharan Africa, with a lot of potential, especially in the deep water, and untapped gas resources.

According to him, Nigeria offers unique opportunities for investment in exploration, refining, storage, transportation, power, distribution and marketing of petroleum products, adding that the nation’s gas reform is anchored on a strategic framework that is focused on maximum economic impact through gas.

Speaking on the theme, ‘Nigeria’s Gas Flare Commercialisation, Prospects and Opportunities’, Baru explained that in the last decade, gas flaring had significantly reduced in the country.

He said the multi-pronged approach taken by the NNPC would ensure a sustainable solution to the historical problem of gas flaring.

Baru said the three-point strategy to arrest gas flaring included ensuring the non-submission of Field Development Plans to the Department of Petroleum Resources without a viable and executable gas utilisation plan, a move aimed at ensuring that no new gas flare in current and future projects.

Others are a steady reduction of existing flares through a combination of targeted policy interventions in the gas master plan, and the re-invigoration of the flare penalty through the 2016 Nigeria Gas Flare Commercialisation Programme and through legislation, that is, ban on gas flaring via the recent Flare Gas (Prevention of Waste and Pollution) Regulations, 2018.

Baru stated that the development would not only see Nigeria dropping from being the second highest gas flaring nation in the world to seventh, but would also signify a major milestone in the country’s gas commercialisation prospects.

“Total flares have significantly reduced to current levels of about 800mmscfd, and in the next one to two years, we would have completely ensured zero routine flares from all the gas producers,” he was quoted as saying.

Baru added that the NNPC had embarked on an aggressive expansion of its gas infrastructure network in order to create access to the market.

“Today, we have completed and inaugurated almost 600 kilometres of new gas pipelines, thereby connecting all existing power plants to permanent gas supply pipelines. We are also currently completing the construction of the strategic 127-kilometre Obiafu-Obrikom-Oben gas pipeline, ‘OB 3’, connecting the eastern supply to the western demand centres,” he noted.

Baru stated that aside looping the Escravos-Lagos Pipeline System 2 gas pipeline projects to increase gas volume capacity to at least 2Bcf/day, the corporation recently signed the contract for the 614-kilometre Ajaokuta-Kaduna-Kano pipeline project, which on completion, would deliver gas to the ongoing power plants in the areas and revive the manufacturing industries in the northern part of the country.

He said there was evidence that the interventions undertaken by the corporation were working as gas supply to the domestic market was growing at an encouraging rate, having tripled from 500mmcf/d in 2010 to about 1,500mmcf/d currently. 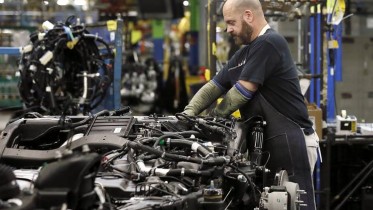 U.S. Economy to Grow by Least Since 2012   The US economic growth will slow down in 2016, according to a survey of forecasters by…