The Nigerian Customs Service (NCS), Tincan Island Command has announced that it raked in N76.78 billion in the first quarter of 2017.

The Customs Area Controller, Comptroller Musa Mohammed Abdullahi, who announced this in a statement, noted that the innovations and reforms towards re-jigging and re-engineering the consciousness of officers/men towards enhancing efficiency and productivity made this possible.

The strategy, which he said was in line with its statutory mandate, appears to be yielding results as evident in the quantum leap of the commands revenue in the first quarter.

Abdullahi stated this while delivering a paper on the “General Overview of the Command”, before a delegation of participants of Senior Division Course 1 / 2018 from the Command & Staff College Gwagwalada led by the Commandant ACG Charles Edike.

He stated that the command in the Q1of 2017 (Jan – March) generated a total of N61.83 billion whereas in the corresponding period of 2018, the command generated N76.78 billion, signifying a difference of N14.94 billion

He said: “Though the Q1 of each year is usually synonymous with low volume of trade, the migration to NICIS II platform by the Command also contributed to some hiccups that affected declarations, but which we have surmounted.”

The Controller, however, reiterated his resolve to ensure that adequate measures were put in place to enable the Command be on top of its statutory mandate, stating categorically that his concept of continuous stakeholder engagement, training and re-training officers as well as trade facilitations models will be leveraged on for service delivery.

He stressed that deliberate and concerted efforts were being made to ensure that the policies and programs of the command is tailored towards achieving enhanced efficiency, while promoting competitiveness in the trade value chain.

He pointed out that the command was at the vanguard of implementation of the presidential directive on Ease of Doing Business as the lead agency and had strengthened the existing relationship with other security/regulatory agencies for actualisation of the directive on creating enabling business environment at the ports.

In his speech, Edike lauded the achievement of the command in the Q1 of 2018 when compared with same period in 2017 and expressed optimism that the controller has what it takes in terms of capacity and integrity to take the command to enviable heights.

Similarly, he informed the Controller that the central theme for the tour is “Enhancing the operational efficiency in Nigeria Customs Service” – with emphasis on how the command contributes to realising same.

He stated further that the team would expect the CAC’s presentation to capture administrative set up of the command, import/export, processes/procedures, automation and other operational tools (Examination, Scanning etc.) major miles stones, achievements in stakeholder relations, challenges among others.

Be the first to comment on "NCS Tincan Island Command Rakes N76.78m in Three Months" 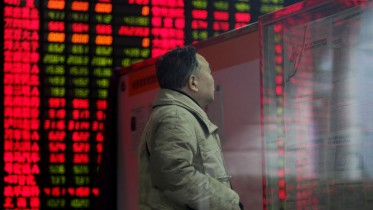 Chinese Stocks Fall Most in a Week

Chinese stocks fell the most in a week, led by materials and technology companies. The Shanghai Composite Index slumped from a three month high after…

We will Not Disappoint Lagosians, Says Ambode