The Nigerian Communications Commission on Thursday said it had remitted N49.79bn to the Federal Government’s Consolidated Revenue Fund in the first three months of this year.

According to a statement made available by the commission, this figure represents “payment on account” in respect of operating surplus for the year 2018.

The statement explained that according to the Fiscal Responsibility Act, 2007, such payments were to be made every year after the preparation of audited accounts.

However, the NCC added that it had taken the initiative to be making payments on account as it generates revenue.

Section 22, sub section 1 of the FRA states, “Notwithstanding the provisions of any written law governing the corporation, each corporation shall establish a general reserve fund and shall allocate thereto at the end of each financial year, one fifth of its operating surplus for the year.”

The statement added that Section 22, subsection 2 of the Act explained, “The balance of the operating surplus shall be paid into the Consolidated Revenue Fund of the Federal Government not later than one month following the statutory deadline for publishing each corporation’s account.”

The statement said the amount remitted was besides spectrum assignment fees, which are remitted 100 per cent to the Federal Government in line with Section 17, subsection 3 of the Nigerian Communications Act, 2003.

It added that the section stated that “the commission shall pay all monies accruing from the sale of spectrum under Part 1 of Chapter VIII into the Consolidated Revenue Fund.”

Be the first to comment on "NCC Remits N49.7bn Surplus to FG in Three Months" 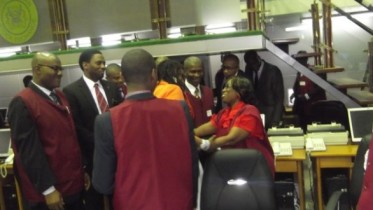