The United Bank for Africa Plc on Thursday disclosed that one of its executive directors, Ayoku Liadi, purchased 3,000,000 UBA shares at N6.05 per share.

Investors King’s comment, please note that the move by the lender’s top executives suggested that insiders with more robust information on the future direction of the company are bullish going forward.

This is one of the reasons Investors King has made it a duty to track all insider dealings and connect the dots. See the details below. 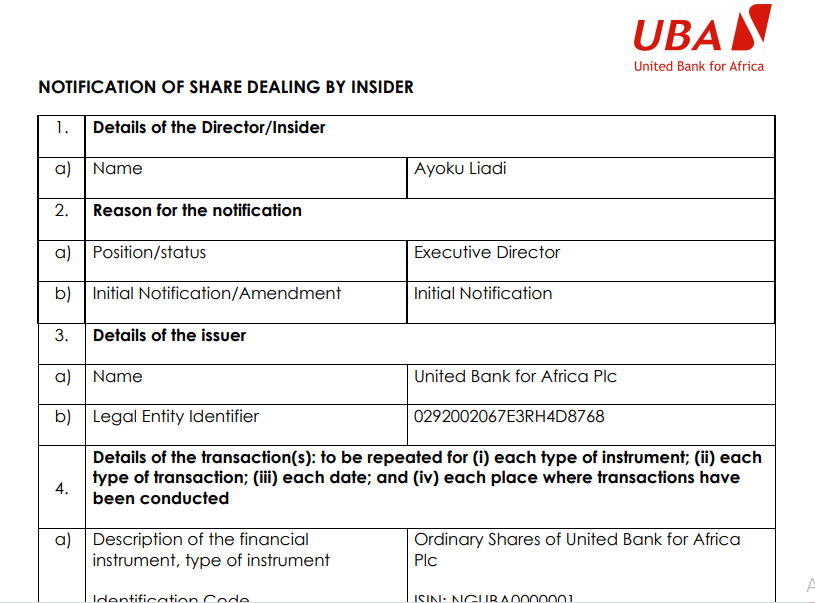 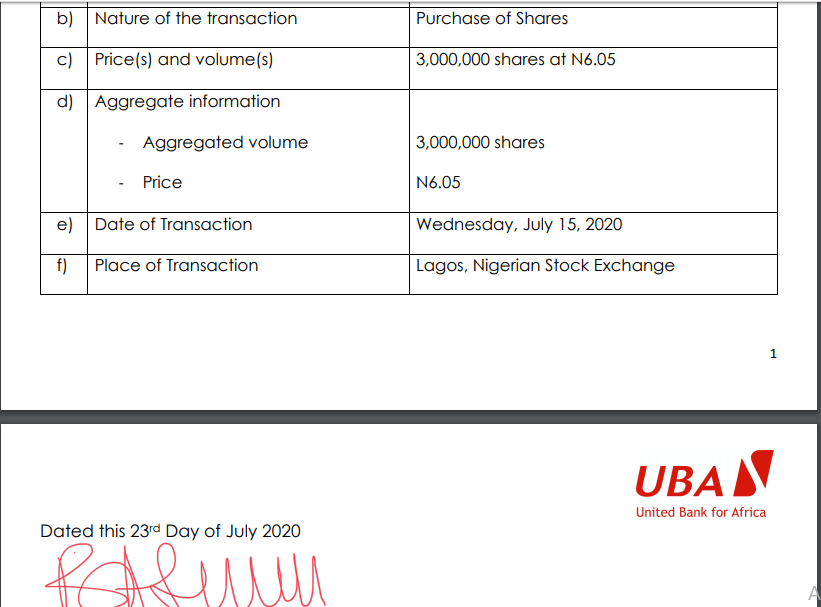 Related Topics:Insider Dealings
Up Next

The bourse closed in the green to extend Thursday’s gain by 1.28 percent.

The market capitalisation of listed equities rose by N174 billion from N13.581 trillion recorded on Thursday to N13.755 trillion on Friday.

The bourse rose following the reduction in the monetary policy rate to stimulate growth from within. The stocks of businesses responded positively as investors expected cheap loans to bolster activities of businesses and enhance productivity in the near-term.

This, coupled with the substantial dropped in prices of stocks due to COVID-19 and general weak macro fundamental increased the attractiveness of Nigerian stocks to local investors as seen in the past few days with executives from Banks and other listed companies buying stocks to take advantage of the expected increase in value when the result of rate cut start crystalising.

Sterling Bank led the most traded stocks on Friday with 79.578 million valued at N92.314 million. Followed by Zenith Bank with 50.748 million shares worth N878.624 million. See the details below.

Insider Trades of Executives of Fidelity, UBA and Cutix

As always, Investors King Ltd documents all insider trades within the Nigerian Stock Exchange to allow stock investors and the public have an insight into what is going on in each of the listed companies.

In filings to the Nigerian Stock Exchange, Fidelity Bank Plc said Mr. Gbolahan Joshua, an Executive Director of the bank, purchased 2,323,529 shares at 1.80 per unit share on September 23, 2020.

Also, Cutix Plc announced that Dr. Gilbert Obiajulu Uzodike added to his stake in the company, the substantial shareholder bought additional 300,000 shares at N1.70 per share on September 18, 2020.

Meanwhile, Tony Elumelu, the Board Chairman of UBA, added 116 shares at N6.0 per share to its holding in UBA, according to the latest filing released on the Nigerian Stock Exchange.

The Nigerian Stock Exchange closed in the green on Thursday as the stocks of mobil, dangote cement and others closed higher.

Investors traded 359.307 million shares valued at N3.873 billion in 3,576 transactions during the trading hours of Thursday.

The market capitalisation of listed equities grew to N13.581 trillion while the NSE All-Share Index gained 0.79 percent to close at 25,987.14 basis points. See the details below.