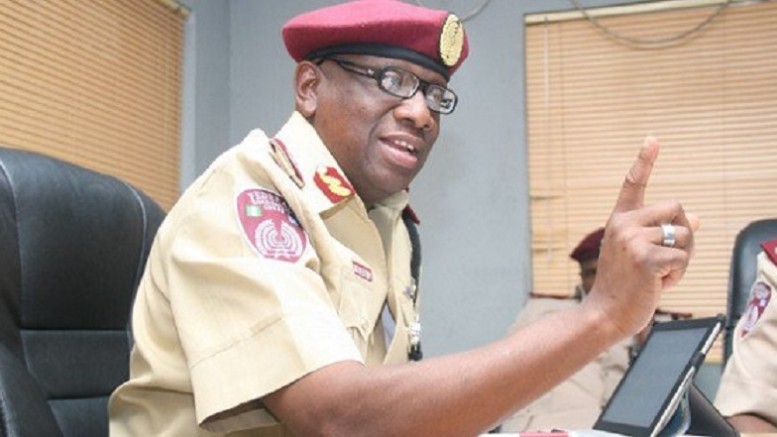 The Corps Marshal of the Federal Road Safety Commission (FRSC), Mr. Boboye Oyeyemi, wednesday said the commission has generated N1.6 billion from fines through its patrol activities between January and November 2016.

Oyeyemi, who acknowledged that FRSC is not a revenue generating agency, added that the money was remitted directly to the consolidated federation account In a statement made available to journalists in Abuja, the FRSC boss expressed appreciation to members of the Senate Committee on Federal Character and Inter-governmental Affairs for their support in the timely release of its 2016 appropriation.

According to him, the timely release of funds has led to enhanced logistic empowerment for the commission as more patrol vehicles, ambulances and tow trucks were purchased to the operational fleet of the FRSC. Oyeyemi also admitted that the overhead cost for 2016 budget has been fully released, while the capital releases were being effected based on availability of funds He promised to would work hard to ensure improved service delivery in order to restore safety on Nigerian roads. In his remark, the Chairman of the Committee, Senator Tijani Kaura, admonished staff of the FRSC to ensure their personal safety during patrol to avoid being knocked down by reckless drivers.

Kaura, however, said the committee was disturbed by reports of patrol men being hit by reckless drivers while performing their legitimate duties on the highways, warning that such dastardly acts by the drivers are unacceptable to members of the National Assembly. The chairman stated that members of the committee were on oversight functions to the FRSC headquarters in Abuja to ascertain the level of implementation of the 2016 budgetary appropriations to the commission and to familiarise themselves with its operations with a view to determining areas of further legislative support

Buhari Rallies His Team: Think Out of the Box to Pull Economy Out of Recession