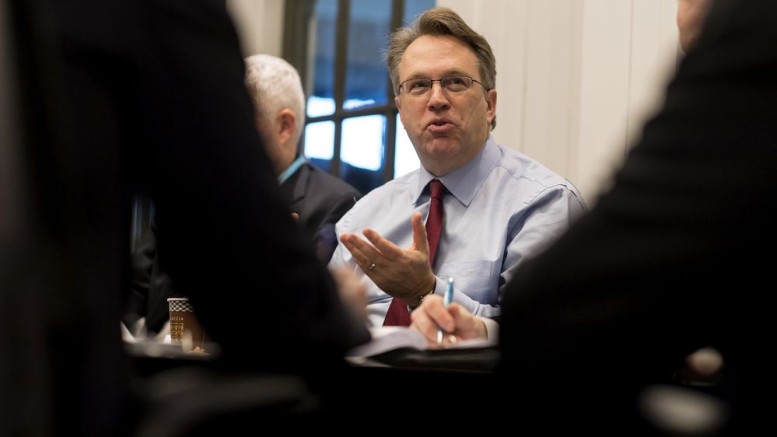 Federal Reserve Bank of San Francisco President John Williams sees a “much smaller” Fed balance sheet in about five years, at the end of an unwinding process that could start with a “baby step” later this year.

“How big will the balance sheet be five years from now, when this has all happened?” Williams said in a Bloomberg TV interview with Haslinda Amin in Singapore on Monday. “That is something we haven’t decided on. It will be much smaller than today.”

Policy makers are coalescing around a plan for gradually reducing the central bank’s $4.5 trillion in assets with a predictable process aimed at minimizing market reactions. The concern is to avoid a repeat of the so-called “taper tantrum” of 2013, when then-Fed Chairman Ben Bernanke sent shock waves rippling through global markets with a mere suggestion that the central bank would taper asset purchases.

Williams, who does not vote on monetary policy this year, said the downsizing will be “boring” and take place “in the background.” It will leave the Fed with assets that will still be significantly larger than they were before the crisis.

His views echo those of Cleveland Fed’s Loretta Mester, also a non-voter this year. In an interview with Germany’s Handelsblatt she called for balance-sheet unwinding to start this year and to be communicated “at the right time.”

In a speech in Singapore earlier on Monday, Williams reaffirmed his view that a total of three interest-rate increases this year make sense in light of “very good” data from the U.S. economy. The Fed raised rates in March. Unemployment is expected to keep falling throughout the year and recent somewhat weak inflation numbers in March should not lead to a change in the Fed strategy if they remain temporary blips, he said.

“The economy is doing well, with good momentum,” he said in the Bloomberg TV interview. “We have a way to go on inflation goals but I am optimistic about the economy.”

The policy tightening aims to avoid letting the economy run “too hot for too long,” Williams added.

The San Francisco Fed president also said he is not overly concerned over China’s slower growth but rather about the long-term sustainability of its financial system.

“What worries me in China is not this year or next year,” he said. “It’s the pretty significant build-up of debt and risk in their financial system, which poses more of a risk over the next five years or so.”

Reps to Investigate NDPC Over $1.5bn Revenue Loss The House of Representatives has resolved to investigate alleged infractions in the operations of the Nigerian Petroleum…