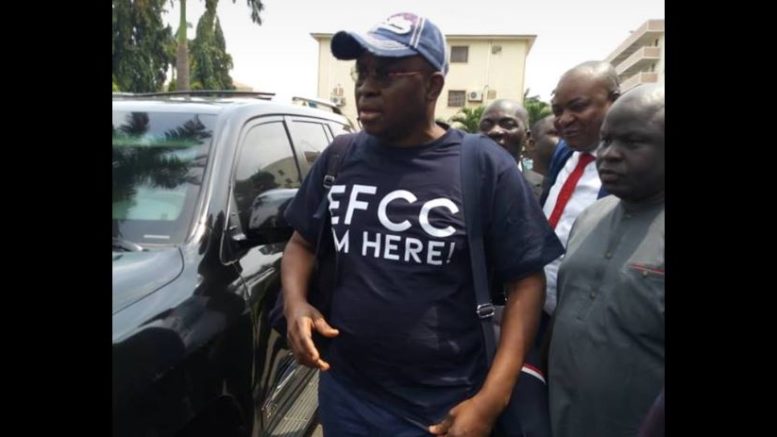 The immediate past Governor of Ekiti State, Ayodele Fayose, finally honoured an invitation by the Economic and Financial Crimes Commission on Tuesday after losing his immunity from prosecution and arrest.

After leading Fayose to the interrogation room, it was learnt that he was asked to write a statement explaining how he spent N1.3bn he allegedly received from the Office of the National Security Adviser through a former Minister of State for Defence, Senator Musiliu Obanikoro, during the build-up to the 2014 governorship election in Ekiti State.

The commission also asked him to return the money.

A source at the EFCC, however, told our correspondent that the former governor refused to admit to collecting the money.

He said, “We have treated Fayose with respect since he arrived in our office. We asked him about the money he received from Obanikoro and when he would return it but he is denying everything.

It was learnt that as of 7 pm on Tuesday, the former governor was still writing his statement.

The funds allegedly traced to Fayose were said to be part of the N4.7bn allegedly handed to Obanikoro by the then National Security Adviser, Col. Sambo Dasuki (retd.)

While about N1.3bn was given to Fayose, another N1.3bn was also handed over to the governorship candidate of the Peoples Democratic Party in Osun State in 2014, Senator Iyiola Omisore.

The funds were said to have been transported from Lagos to Ekiti State by air.

Since the investigation began in 2015, the EFCC has interrogated over 20 persons.

Apart from Obanikoro and Omisore, others interrogated by the EFCC include Captain Ahmed Borodo, the pilot whose plane was allegedly chartered by Obanikoro; Aide-de-Camp to Obanikoro, Lt. Olumide Adewale; and Fayose’s aide, Abiodun Agbele (who is standing trial for allegedly receiving the funds on behalf of Fayose).

“Despite the statements made by all these people indicating that Fayose received money, the man is still denying the allegations,” an EFCC detective said.

However, Fayose’s lawyer, Chief Mike Ozekhome (SAN), said Fayose would not compromise himself in the name of administrative bail.

Ozekhome said Fayose’s accounts had already been frozen by the commission and was already in court over the matter.

“Fayose is not like other Nigerians that the EFCC will bamboozle and force and blackmail to make refunds. Why tell a man to refund the money he has not admitted to receiving when the matter is in court?

“If they offer him an administrative bail with no strings attached, which is not a Greek gift, then he should take it.”

Earlier in the day, before entering the EFCC premises, Fayose and scores of his supporters had created a scene at the entrance of the commission.

Fayose, who wore a blue shirt with the inscription, ‘EFCC, I am here’, and a blue pair of trousers with a blue face-cap to match, arrived at the Tunde Idiagbon House, Wuse 2, which is the former headquarters of the EFCC, around 1 pm.

The former governor, who clutched a backpack and a small duffel bag, was accompanied by Governor Nyesom Wike of Rivers State; a former Minister of Aviation, Chief Femi Fani-Kayode; his lawyer, Chief Mike Ozekhome (SAN), and several of his aides and supporters.

Addressing reporters before making his way into the EFCC, Fayose said, “I am here in line with my promise that I will be here on the October 16.

“And, as I said to the EFCC, they should await my arrival. This morning, they have been to my house; they cordoned off my street, which I feel was unnecessary. It was unwarranted.

“When a man says he is coming, Nigerians should be given benefit of the doubt.

“I had led Ekiti, and the best I could give, I have given. Therefore, every question, whatever they need to ask today, I will be able to respond appropriately.”

Also speaking, Governor Wike said he accompanied Fayose in order to warn the EFCC to respect his rights.

Wike added, “He wrote a letter to the EFCC that he will submit himself on October 16. He is hale and hearty and I believe that EFCC should know he is well. Our fear from the present report that we have is that he may be harmed.

“But, let Nigerians know that he came by himself to the EFCC without anybody harassing him. So, that is why I brought him here today.”

In his remarks, Fani-Kayode said the EFCC should remember that their actions were being monitored by the international community and they should not abuse Fayose’s rights.

Ozekhome asked the EFCC not to keep Fayose for more than 24 hours as failure to release him would be an abuse of his rights.

Be the first to comment on "EFCC Grills Fayose, Asks ex-gov to Return N1.3bn" 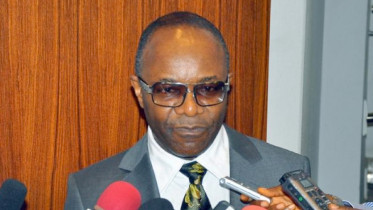