African leaders are not buying into climate change campaign yet as they insisted their need for oil money outweighed climate concerns.

This was in response to a group of protesters that stormed the Cape Town International Convention Centre in South Africa during Africa Oil Week to demand an end to fossil fuel in accordance with the Paris Agreement.

Gabriel Obiang Lima, energy minister of Equatorial Guinea, said it is unfair to tell Africa not to develop oil fields at a period like this.

“Anybody out of the continent saying we should not develop those fields, that is criminal. It is very unfair.”

“Under no circumstances are we going to be apologising,” said Gabriel Obiang Lima.

While the tension felt at the three-day oil conference was minimal, in Europe, most oil conferences were plagued with protesters demanding environmentally friendly fuel.

Despite nations and organisations calling for the world to end fossil fuel, over 600 million people in Africa still don’t have access to electricity. A situation most experts blame for the continent sluggish growth.

“They even want to tell us to switch off all the coal-generated power stations,” he said. “Until you tell them, ‘you know we can do that, but you’ll breathe fresh air in the darkness’.”

Developed economies with huge manufacturing plants contributed the most to global warming.

This explains why more efforts are put on developed economies to cut emissions than developing economies.

Noel Mboumba, Gabon’s minister for hydrocarbons, said oil is one of the key drivers of development.

“We will do all in our power to develop it.” 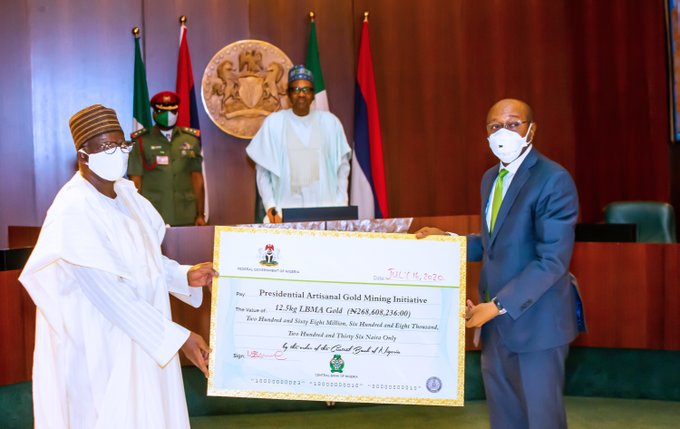 The Federal Government on Thursday launched the Gold Purchase initiative to further open up the economy and take advantage of the nation’s numerous mining opportunities.

During the virtual launch of Gold Purchase under the Presidential Artisanal Gold Mining Initiative (PAGMI) held at the State House in Abuja earlier today, the governor of the Central Bank of Nigeria, Mr. Godwin Emefiele presents a dummy Cheque of 12.5kg LBMA Gold to Prof Ibrahim Gambari, the Chief of Staff, before President Muhammadu Buhari.

The apex bank, in a tweet, said: “#CBN Governor, Mr. Godwin Emefiele presents the dummy Cheque of 12.5kg LBMA Gold to the Chief of Staff, Prof Ibrahim Gambari before President Muhammadu Buhari during the virtual launch of Gold Purchase under the Presidential Artisanal Gold Mining Initiative (PAGMI) held at the Council Chambers, State House in Abuja on Thursday 16 July, 2020.”

The Nigerian National Petroleum Corporation has said 65 pipeline points were vandalised in the month of April by criminals.

In the corporation report released on Wednesday for the month of April, NNPC said this represents a 240 percent increase from the 19 points recorded in the month of March 2020.

Meanwhile, in another related development, the NNPC said it incurred over 200 percent operating deficit in the month of April.

“The current hike of over 200 per cent is attributed to the 29 per cent increased deficit for NPDC due to ongoing coronavirus-related impact of reduced exports, coupled with the upsurge in corporate headquarters deficit arising from terminal benefits made to retired staff.”

In the corporation’s latest financial and operational activities report for April, it says the over 200 percent loss was recorded through the Nigerian Petroleum Development Company, a subsidiary of the Nigerian National Petroleum Corporation.

“The current hike of over 200 per cent is attributed to the 29 per cent increased deficit for NPDC due to ongoing coronavirus-related impact of reduced exports, coupled with the upsurge in corporate headquarters deficit arising from terminal benefits made to retired staff.”

Meanwhile, the report also stated that the corporation supplied a total of 0.94 billion litres of petrol, representing about 31.37 million litres per day, in the month of April.