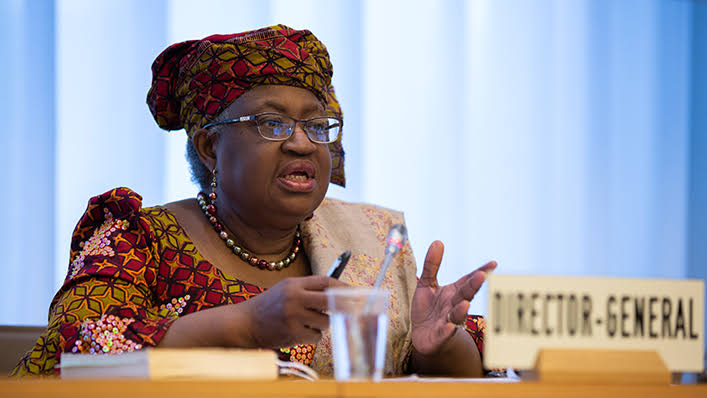 The Director-General of the World Trade Organisation (WTO), Dr Ngozi Okonjo-Iweala, said that Nigeria needs to create 5 million jobs for a decade to be able to tackle unemployment.

Dr Okonjo-Iweala spoke when she met with captains of industry in Abuja on Tuesday.

“Nigeria must create jobs, especially for its young people,” she said.

She made a case for value-added manufacturing and urged captains of industry to pursue it.

The DG said economic growth in Nigeria has been sluggish since 2016 when oil prices tumbled globally.

“Nigeria’s economy is at a critical juncture. Insufficient structural change has made Nigeria more vulnerable to the shocks in the fall of oil prices five years ago and now it must grapple with the impact of the pandemic.

“The looming transition to a low carbon global economy implies more changes ahead,” she said.

She advised Nigeria to focus on careful economic planning and management for economic growth.

The WTO said Africa imports over 90 per cent of its pharmaceuticals and urged captains of industry in Nigeria to invest in Pharmaceutical to be better positioned for the next pandemic.

The Chairman of Dangote Group, Aliko Dangote, urged the WTO to help Nigeria in its quest to make a mark in the African Continental Free Trade Area (AfCFTA).

“One area you can help us with is at AfCTA. We need a lot of support from the WTO to make sure that it works.

“Right now, the biggest challenge that we have is that the regional markets are not really working.

“They work to a certain extent but a couple of them are not following the rules,” he said.

He said Nigeria needs to trade more with African countries to strengthen the economies of Africa and create jobs.

The top businessman said by this quarter or early next quarter, Nigeria will be the largest exporter of fertiliser in Africa.

“Our company will end up being nearly export-oriented. We will export excess cement, we will export petrochemicals.

“We will export urea. The only one we will not export is sugar, which under the leadership of the Honourable Minister of Industry, Trade and Investment, we are doing massive backward integration to make sure if we don’t export, we will not import,” he said.

In a recent report, it was asserted that there has been a massive portfolio outflow of over $5 billion from Africa in the first quarter of 2021, this was a result of Constrained global financial conditions caused by Covid-19.

This report was conducted by African Export-Import Bank (Afreximbank) jointly with the UN Economic Commission for Africa and the African Development Bank-hosted Making Finance Work for Africa Partnership.

The African Trade Finance Survey Report Launched on 15 April 2021, examines how trade finance has evolved during the Covid-19 pandemic and highlights the role it can play in overcoming the social and economic fallout of the disease.

At the launch, the president of Afreximbank, Professor Benedict Oramah said a growing number of international banks were becoming even more reluctant to take on payment risks in countries where economic conditions were deteriorating.

“These massive capital outflows strained African banks, many of which recorded sharp drops in their net foreign assets. This further exacerbated liquidity constraints and undermined the capacity of banks to finance African trade,” he said.

The survey covers the first four months of 2020, including April, when global trade recorded its largest contraction on record. It aims to inform the design of interventions to address market challenges and effectively engage African financial institutions, trade finance intermediaries, regulatory authorities, and national authorities to accelerate efforts to bridge the region’s trade finance gap.

The report made numerous recommendations, including greater engagement between central banks and the industry, a push for increased digitalization and uptake of new technologies, and better data.

Despite the many challenges that came along with Covid-19, some opportunities also arose, the report noted. In fact, a few African countries’ economies showed strong resilience and expansion during the pandemic primarily due to their ability to be agile and to digitalize swiftly over the period.

To mitigate the significant outflows and mobilize for recovery, Vera Songwe, Executive Secretary at the UN Economic Commission for Africa, urged African leaders, especially Central Bank Governors and Finance Ministers and development partners, to further support institutions such as Afreximbank through capital increases and deploy more resources towards Africa’s recovery.

Mervat Soltan, Chairperson and Managing Director at the Export Development Bank of Egypt, said the Bank had seen a significant increase in its digital services during the pandemic downturn. “Digitalization, which sustained business and trade growth during the pandemic, offers a great opportunity to help reduce costs and increase the use of trade finance facilities, and should become an integral part of the strategy to boost African trade post-Covid-19,” she added.

One way to boost African trade is through the African Continental Free Trade Area (AfCFTA), which the UN’s Economic Commission for Africa estimates can improve intra-Africa trade by over 50 percent. Bola Adesola, Senior Vice Chairman for Africa at Standard Chartered, said the AfCFTA can provide an ideal platform to help drive new businesses on the continent, which will help accelerate trade.

The Nigeria Customs Service (NCS) realised N466.1 billion in revenue in the first quarter (Q1) of 2021, according to the latest data from the Public Relations Officer, NCS, Mr. Joseph Attah.

A further breakdown showed the agency generated N216.9 billion of the total amount from import duty, while N105.2 billion was realised as Customs VAT and N55.5 billion was generated as a non-federation accounts levies.

Another N50.8 billion was generated from federation account levies while N34.5 billion was gotten from excise duty as well as N2.8 billion from fees.

Similarly, the data showed that within the period under review, the service made a seizure of different contraband goods valued at N1,996,145,258.

The Governor of the Central Bank of Nigeria, Mr. Godwin Emefiele, has said the African Continental Free Trade Agreement (AfCFTA) could give Nigerian businesses access to African markets worth $504.17 billion in goods when fully implemented.

Emefiele, who spoke at the Zenith Bank’s 2021 Export Seminar held virtually in Lagos on Tuesday, said an extra $162 billion in services will also come to the country.

He, therefore, encourage Nigerian firms to seize the AfCFTA opportunity and ensure the nation becomes a significant hub for international and domestic manufacturing companies seeking to serve the country.

“I believe the AFCFTA will provide an opportunity for these young talented Nigerians to expand their services across the African region. Developing trade portals that could support instant sales of goods manufactured in Nigeria to consumers in other parts of Africa is one aspect that can help to support the creation of jobs in Nigeria and improve foreign exchange inflows for the country,” he said.

The CBN Boss said financial institutions in Nigeria are already playing a significant role in expanding across the continent.

“I would like to encourage them to also leverage their presence in other parts of Africa, to support Nigerian businesses seeking to expand into new markets in Africa, by providing trade facilities to those with strong potentials for growth,” he said.

Emefiele added that the central bank has taken steps to improve productive capacity of businesses, which he said would enable them to take advantage of export opportunities in Africa.

“Our intervention programs in the agriculture and manufacturing sectors, are helping to enable businesses expand their scale of production, which is meeting growing domestic demand for goods, but also providing goods for the export market.”