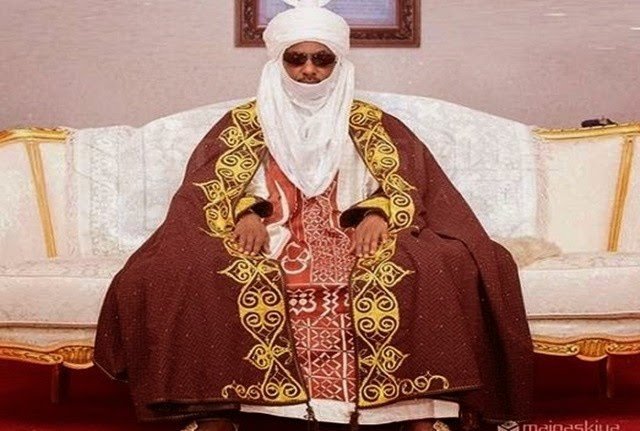 The Emir of Kano, Mallam Muhammad Sanusi II, has warned that Nigeria is on the verge of bankruptcy as fuel and electricity subsidies, as well as debt servicing, continue to eat into government revenue.

Sanusi, who is a former governor of the Central Bank of Nigeria, said this while delivering his address at the ongoing third National Treasury Workshop, organised by the office of the Accountant-General of the Federation in Kano.

He advised President Muhammadu Buhari’s administration to scrap fuel and electricity tariff subsidies in order to stabilise the economy.

He said, “In 2011, when I was CBN governor, Nigeria made $16bn from petroleum sales, and we spent $8bn importing petroleum and spent another $8.2bn subsidising the product…and I asked, ‘Is this sustainable?

“The country is bankrupt and we are heading to bankruptcy. What happens is that the Federal Government do pay petroleum subsidy, pays electricity tariff subsidy, and if there is a rise in interest rates, the Federal Government pays. What is more life-threatening than the subsidy that we have to sacrifice education, health sector and infrastructure for us to have cheap petroleum?”

Sansui said, “If truly President Buhari is fighting poverty, he should remove the risk on the national financial sector and stop the subsidy regime, which is fraudulent.”

He said the President must tell Nigerians the facts about the economic situation and act promptly to address it.

Sanusi told the participants at the workshop, “We need to ask these questions: why are there high mortality rates, malnutrition, high rate of out-of-school children, among others, while the national treasury goes to petroleum sector?

The Emir expressed worry about the state of public finance in the country, saying there were a number of very difficult decisions that must be made.

He said, “We should face reality. His Excellency, the President, said in his inaugural speech that his government would like to lift 100 million people out of poverty. It was a speech that was well received, not only in this country but worldwide.

“The number of people living in abject poverty in Nigeria is frightening. By 2050, 85 per cent of those living in extreme poverty in the world will be from the African continent, and Nigeria and the Democratic Republic of Congo will top the list.

“Two days ago, I read that the percentage of government revenue going to debt servicing had risen to 70 per cent. These numbers are not lying. They are public numbers. I read them in the newspapers. When you are spending 70 per cent of your revenue on debt services, then you are managing 30 per cent.

“And then, you continue subsidising petroleum products and spending N1.5tn per annum on petroleum subsidy! And then we are subsidising electricity tariff. And maybe, you have to borrow from the capital market or the Central Bank of Nigeria to service the shortfall in the electricity tariff. Where is the money to pay salaries? Where is the money for education and other government projects?”

In his address at the workshop, the Chairman, Economic and Financial Crimes Commission, Mr Ibrahim Magu, stressed the need to tackle corruption in the country and warned public and private office holders to desist from corrupt practices.

Economic and financial experts, who spoke with our correspondents in separate interviews, expressed divergent views on the Emir’s statement that the country was heading towards bankruptcy.

The President, Lagos Chamber of Commerce and Industry, Mr Babatunde Ruwase, said the chamber had always stood against petrol subsidy, adding that it was not economically healthy to keep subsidising consumption.

He said instead of subsidising consumption, the money should be channelled into capacity building in the educational sector, health and other ventures.

“Productive ventures like farming should benefit from subsidy and not consumption. If we continue the way we are going, it is only a miracle like a sudden and astronomical rise in the global price of crude oil that will save us; otherwise, the nation will definitely go bankrupt,” he added.

According to Ruwase, the current subsidy regime is not sustainable and is open to abuse and fraud.

On electricity tariff, he said, “If the government wants investors to come into the electricity sector, it has to relax its control and allow the economic cost to determine the tariff. The current tariff we have was set three years back and it is lower than the cost of investing in the sector.”

The Registrar, Chartered Institute of Finance and Control of Nigeria, Mr Godwin Eohoi, described the nation’s debt service cost as high but said it could not make the country go bankrupt.

According to him, there are many areas that the country can explore to generate much-needed revenue.

He, however, said the over-reliance on oil had made it difficult to focus on the revenue-earning potential of the non-oil sector.

“While I agree with the Emir that the amount spent on debt service is high, I disagree with him that it will lead us to bankruptcy. The government has given an indication that revenue would be increased; so, if that is achieved, then we can avoid bankruptcy.”

When asked if he was in support of the removal of subsidy, he said, “Subsidy is an issue that has lingered for long and it will take the political will for it to be removed. There is no political will to remove it now.”

A former President, Association of National Accountants of Nigeria, Dr Sam Nzekwe, described the Emir’s statement as a wake-up call to the government to make things work better in the economy.

He said, “It is subjective that Nigeria is heading to bankruptcy, but I think what he is trying to say is that because of our dependency on oil when there is internal and external volatility or attack on oil pipes, we will not be able to produce as much.

“If there is volatility in prices, then there will be a problem. We have not been able to get the economy working as we are supposed to. A country whose economy is not producing and the population is growing faster than the economy is a problem. The government is still the driver of the economy, but we need to get the private sector to drive the economy. We need to create an enabling environment for things to work, provide critical infrastructure for the private sector to join.”

According to Engineer Gbenga Komolafe, the Chief Executive of NUPRC, gas flaring in the oil gas industry has been a continuous menace that needs to be eradicated because of its adverse effect on the people’s health, the Environment and also a major resource waste and value erosion to the country.

Gbenga mentioned that to monetize gas resources is to take a positive step toward securing energy security, especially in this period of global energy transition. He said as a nation, Nigeria needs to ensure it harnesses every available gas resource in other to create value.

He declared that the NUPRC is resuming the procedure of issuing flare sites to competent technical companies, after a complete bidding process.

This process is crucial and important in respect of the direction of the federal government’s policy to ensure every gas resource is properly developed for national development.

He laid emphasis that the wasteful disposal of natural gas is not only hazardous with serious health and environmental consequences but also a waste of resource and value to Nigeria.

In addition to this, he stated that the FG declared the period 2021 to 2030 as the DECADE OF GAS, a period which the country must change direction from oil centered exploitation to a gas-focused industrial development.

Although the World Bank has set 2030 as the target year to end gas flaring, Nigeria has set the country’s deadline tp 2025.

“President Muhammadu Buhari made a commitment towards the Paris Agreement during the COP26 Leaders’ Summit to achieve Net Zero carbon emissions by 2060,” he said.

The director general of the ministry of foreign affairs of China, Wu- Peng, has reaffirmed China’s commitment to maintaining cooperation with Africa.

Wu-Peng disclosed this at a meeting held with African journalists under the auspices of the China Africa Press Centre (CAPC) in June 2022 in Beijing.

Quoting the president of China, Xi Jinping, Wu-Peng said “China will work hand in hand with African countries to implement linked programs in the next three years”.

According to Wu-Peng, this includes programs related to the medical and health sector, poverty alleviation, agricultural growth and promoting investments.

“We’re still fighting to contain Covid-19 since the outbreak of the pandemic, China has so far provided about 260 million doses of vaccines to 55 African countries and African Union,” the Director General said.

He also mentioned that China had also made provision for about 120 batches of emergency supplies to African countries and they all have diplomatic relations with China and also contributed to Africa’s early recovery from the Covid-19 pandemic.

“China has already constructed the African CDC in Addis Ababa and it will be completed in 2023.

The other program I would like to make mention is the agricultural sector. When FOCAC was held in 2021, there was no Russia-Ukraine crisis, yet we focus and invested in Agriculture in Africa.

“The reason been, we believe in the potential of Agriculture in Africa, the growth and development is huge, there are still lots of arid land in Africa, Wu-Peng stated.

“Unfortunately, Africans still have to import grapes from the outside which costs a lot of currency and actually damages Africa’s international balance sheet.”

He said that the failure to prioritize agriculture could obstruct fast economic growth in Africa, suggesting that more should be done through Public Private Partnership (PPP) to ensure food security.

The director general laid emphasis on the need for proper implementation of the report from the FOCAC meetings to bring to life the realization of set goals and objectives.

“This does not make sense, you have lands, you have labor forces, I think we just need the right policy to promote price investments in industrial large scale farms to improve our food security.

“Why this is has become very important is due to the Ukraine crisis, food prices globally surged and going forward, we must finish construction of the project in the nearest future.

“African governments have already noticed developments of agriculture is a huge priority to deal with the crisis of hike in food prices, we want Africas countries to have up to date plans from FOCAC meetings and the findings of the results.

“Usually, when we have FOCAC meetings we just produce documents, we need more concrete actions, we must be focused,” the director general said.

Prices of goods and services rose to a 17-year-high in Africa’s largest economy Nigeria in the month of July, the National Bureau of Statistics (NBS) reported on Monday.

On a month-on-month basis, the food inflation rate in July was 2.04%, this was a 0.01% insignificant decline compared to the rate recorded in June 2022 (2.05%). This decline is attributed to a reduction in the prices of some food items like Tubers, Maize, Garri, and Vegetables.

Rising economic uncertainties amid a series of policy changes like the increase in duty on imported raw materials, high electricity tariffs,  fuel, etc needed to manufacture the necessary food items are responsible for the persistent increase in inflation.

Also, the extended decline in the value of the Nigerian Naira against its global counterparts has made foreign goods or imported goods expensive for Nigerians. Therefore, manufacturing companies are now passing the increase to final consumers already struggling with low earnings and a high unemployment rate.