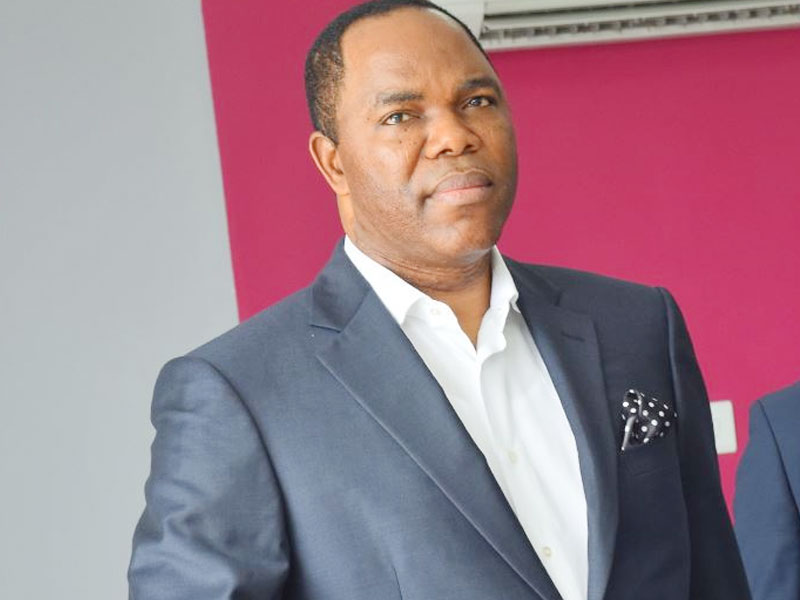 The Economic and Financial Crimes Commission has accused, Mr Tunde Ayeni, the chairman of the defunct Skye Bank (now Polaris Bank) of taking N17.5 billion cash from the bank between January 1 and December 31, 2014.

The commission also alleged that Ayeni received N3.75 billion from the same account in 2015.

The allegations are part of the ten charges filed against the chairman and three other people before a Federal High Court in Abuja.

One of the charges read, “That you, Tunde Ayeni, whilst being the Chairman, Board of Directors of the defunct Skye Bank Plc between January 1, 2014 and December 31, 2014, at Abuja within the jurisdiction of this honourable court, did accept cash payment of the aggregate sum N17,415,080,000.00, taken from the defunct Skye Bank suspense account and delivered to you by the employee of the defunct Skye Bank, which money you reasonably ought to have known forms part of the proceeds of an unlawful act, to wit, fraud and thereby committed an offence contrary and punishable under Sections 15(2)(b) and (3) of the Money Laundering (Prohibition) Act, 2011 (as amended).”

This suit is separate from the N4.75 billion and $5 million fraud charge Ayeni and a former Managing Director of the Bank, Timothy Oguntayo, are facing before Justice Nnamdi Dimgba of a Federal High Court.

The EFCC listed nine witnesses against Ayeni and others.

They include four employees of the bank, officials of the EFCC and representatives of the FCMB. 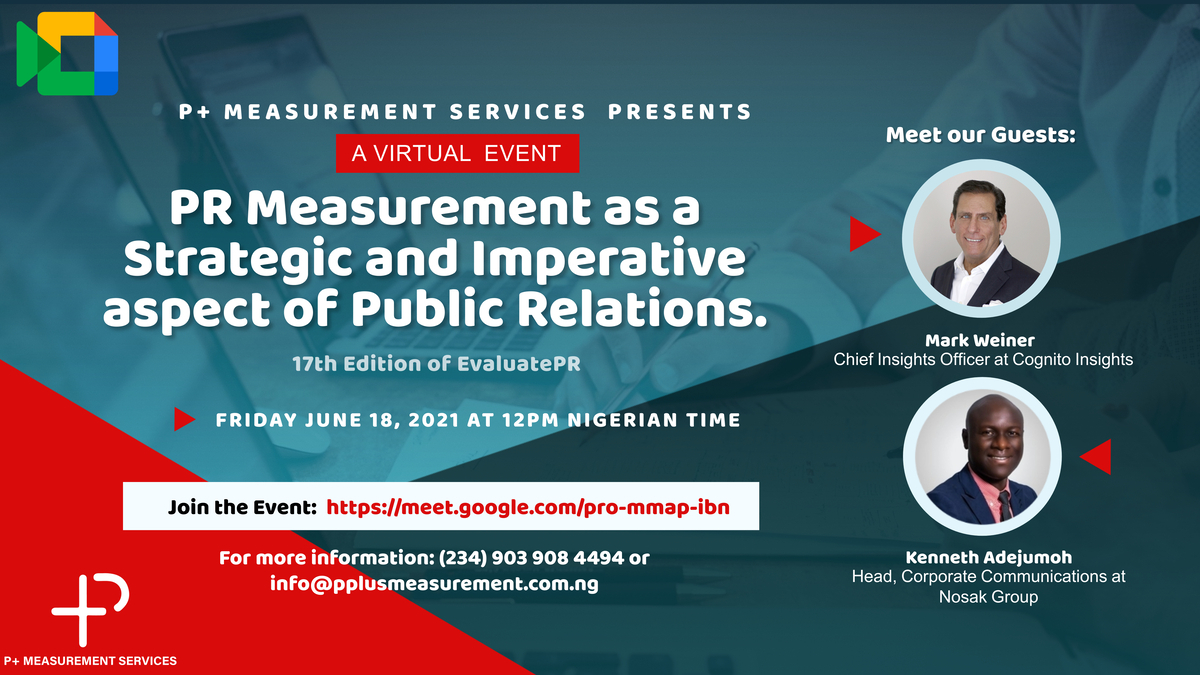 The event which is often convened via Twitter is set to take place via Google Meet platform due to the ban on the use of the micro blogging app in Nigeria. The event will be grazed by communications and measurement professionals who will share key insights from their wealth of knowledge and experience in PR and Measurement of communications to educate the audience, and it promises to be an interactive session.

Evaluate PR is an highly informative event in the PR Industry, and the 17th Edition will feature Mark Weiner, Chief Insights Officer for Cognito Insights, New York, USA and Kenneth Adejumoh, Head of Corporate Communications, Nosak Group, Nigeria, who together will provide robust perspectives and answers into the theme of the event and questions to be asked.

The one-hour event is scheduled to take place, Friday, 18th June 2021, between the hours of 12pm–1pm (West African Time).

To join in the conversation, kindly join using the Google Meet link: https://meet.google.com/pro-mmap-ibn 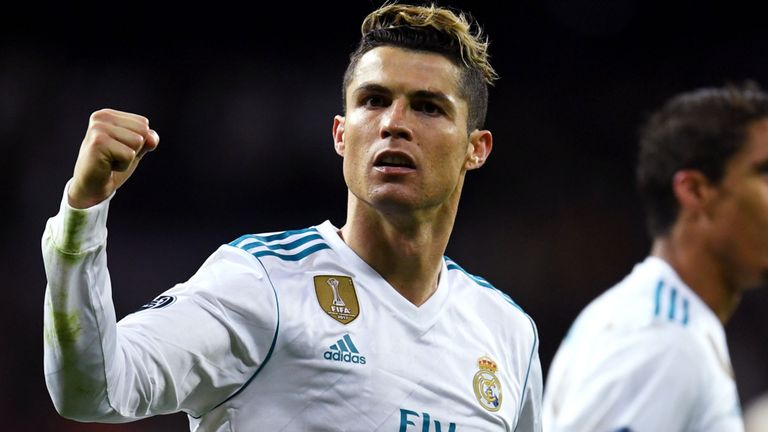 Cristiano Ronaldo’s removal of two Coca-Cola bottles during a press conference at the Euros has wiped $4 billion off the market value of the beverage giant company.

The Portugal captain is a renowned health fanatic and made it clear what he thinks of the carbonated soft drink. The 36-year-old shifted the bottles of Coca-Cola away from him during a press conference in Budapest on Monday in the prelude to his country’s Group F game against Hungary.

Ronaldo followed it by holding up a bottle of water before declaring in Portuguese: “Agua!”, appearing to encourage people to choose that instead.

Coca-Cola, one of the official sponsors of Euro 2020, replied on Tuesday with a statement that said “everyone is entitled to their drink preferences” with different “tastes and needs”.

A Euros spokesperson said: “Players are offered water, alongside Coca-Cola and Coca-Cola Zero Sugar, on arrival at our press conferences.”

On Tuesday, he scored twice in Portugal’s 3-0 win over Hungary – moving beyond France great Michel Platini as the record goalscorer at the European Championship finals with 11. 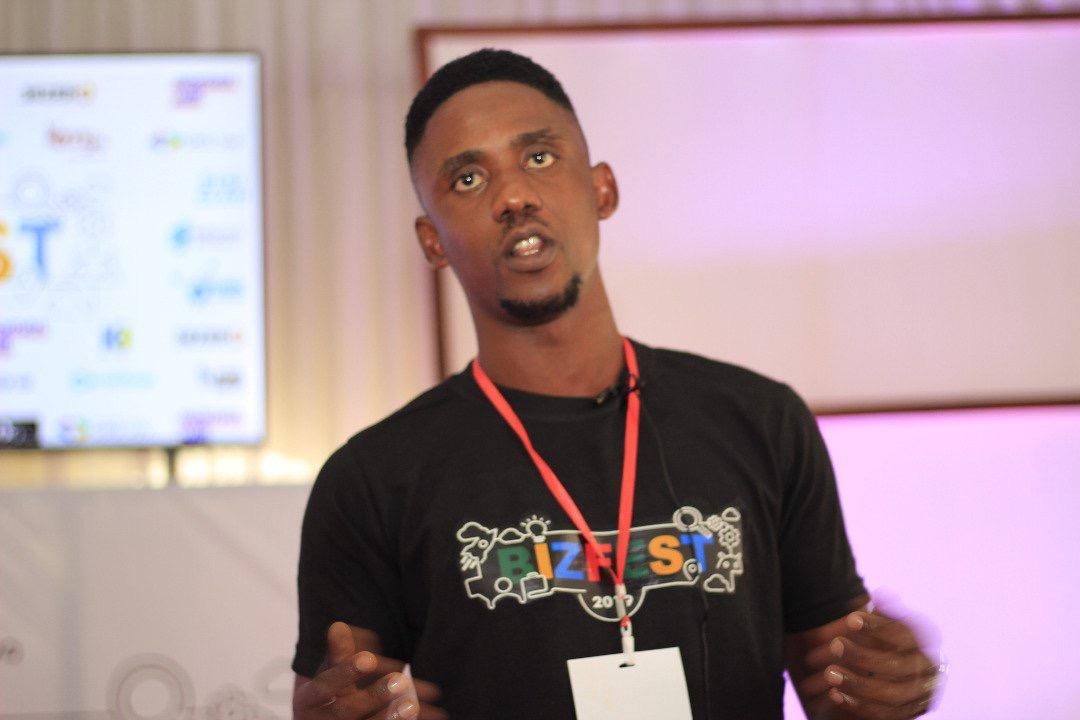 Chidi Nwaogu, serial tech entrepreneur and co-founder at Publiseer and Savvy, has been nominated as Techpreneur Of The Year at the 2021 FOYA Awards, an annual awards ceremony since 2016, which was conceived to serve the strategic objective to retain, reward, and recognize high-quality entrepreneurs and SMEs in Africa.
Chidi Nwaogu is the co-founder and CEO at Publiseer, a digital content distribution company that has helped over 6,000 underserved African creatives living in low-income and disadvantaged communities to earn a living from the sales of their creative works, and has been described by Konbini as “one of the largest digital publishers in Africa” and identified by IFC as one of the startups “that could speed up innovation in Africa”.
He is also the co-founder and Head of Program at Savvy, a global fellowship program that has equipped over 3,900 passionate and brilliant young individuals from 136 countries, with the necessary knowledge, skills, resources, tools, and support community that they need to start their own impact-driven business in a post-COVID era and succeed as social entrepreneurs.
For his works at Publiseer, Nwaogu won the 2020 Migration Entrepreneurship Prize by the Swiss Government, the 2019 Africa 35.35 Award for Entrepreneurship, the 2019 Young Leaders Award for Media and Entertainment, and the 2019 Bizz Business Excellence Award. He is a 2020 Acumen Fellow (West Africa), 2020 Alibaba eFounders Fellow (China), 2019 Westerwelle Fellow (Germany), 2019 African Presidential Leadership Fellow (Cairo), and 2019 Yunus&Youth Fellow (New York).
FOYA Awards is designed to recognize and appreciate young founders contributing to the African continent’s economic growth while creating employment and other income-generating opportunities through entrepreneurship, thereby inspiring others to be founders in their own right. The platform has developed into a convening agent for actors in the youthful entrepreneurship ecosystem attracting and stewarding access to relevant investors, not-for-profit leaders, influential personalities, and government officials to address everyday challenges and devise impactful, lasting solutions.
Continue Reading