Oil prices rose on Wednesday ahead of an OPEC meeting next week at which the producer club is expected to decide some form of supply cut to counter an emerging glut.

Despite Wednesday’s rise, oil prices have still lost almost a third of their value since early October, weighed down by an emerging supply overhang and by widespread weakness in financial markets.

The Organization of the Petroleum Exporting Countries (OPEC) will meet at its headquarters in Vienna, Austria, on Dec. 6 to discuss output policy.

The OPEC-meeting will follow a gathering by the Group of 20 (G20) nations, which includes the world’s biggest economies, in Argentina this weekend, at which the Sino-American trade dispute as well as oil policy are expected to be discussed.

While most analysts expect some form of supply cut from the OPEC-meeting, sentiment in oil markets remains negative.

“Options traders remain focused on downside risks following a 30 percent slide in WTI,” Erik Norland, senior economist at commodities exchange CME Group wrote in a note, referring to the higher number of traders who have placed positions that would profit from a further fall in crude prices than those placing bets on a rising market.

Portfolio managers have slashed their combined net long position in crude futures by a total of 607 million barrels over the last eight weeks, the largest reduction over a comparable period since at least 2013, when the current data series began, exchange data showed.

A concern to global markets is a slowdown in global trade as a result of the Sino-American trade dispute, swelling debt and a strong dollar that puts pressure on emerging markets.

The World Trade Organization (WTO) said in its latest outlook, published on Tuesday, that “trade growth is likely to slow further into the fourth quarter of 2018”, with growth likely at its slowest since Oct. 2016.

New COVID Variant: Brent Crude Sheds Over $10 to $72 Per Barrel

Brent crude oil extended decline by over $10 on Friday on concerns that a new COVID variant called B.1.1.529 could force economies to impose restrictions and slow down global demand.

Brent crude, against which Nigerian crude oil is measured, dropped from $82.55 per barrel it attained on Thursday to as low as $72.09 on Friday at 7:20 pm Nigerian time before it rebounded slightly to $72.98 per barrel as shown below.

Global financial markets plunged across the board following reports that two cases of the new heavily mutated COVID variant from South Africa have been reported in Hong Kong and that the United Kingdom, one of the most affected nations during COVID-19 with over 140,000 deaths has halted flights from six South African nations to prevent a potential breakout of the new COVID variant.

Experts are concerned that the new variant outbreak would slow down global growth and increase global risks going into the new year.

According to Craig Erlam, Senior Market Analyst, UK & EMEA, OANDA, “Even without severe restrictions, people will adopt more caution which will weigh on demand, as OPEC+ has repeatedly stated and factored into their models.”

However, heavy crude oil-consuming nations like the United States, China and others that have been calling for more supply will now enjoy substantial price reduction if this continues, therefore, Joe Biden may not need to release millions of barrels into the global market.

“Crude is back at levels last seen at the start of October and if this risk aversion continues in the weeks ahead, there’s plenty of room to fall. While OPEC+ would likely have avoided altering production plans next week or in the months following in response to the SPR releases, it may soon feel its hand is being forced. Next week may come too soon but another major outbreak could see them slam on the brakes,” Craig Erlam added.

Risk assets are getting pummelled at the end of the week as a new Covid variant sparks fears of new restrictions and lockdowns.

The most worrying thing about the new strain at the moment is how little we know about it, with early indications being that it could be more problematic than delta. The biggest fear is that it will be resistant to vaccines and be a massive setback for countries that have reaped the benefits from their rollouts.

We’ll no doubt learn more in the days and weeks ahead but for now, fear of the unknown will weigh heavily going into the weekend and could carry over into next week. We’re seeing a typical flight to safety in the markets with equities, commodity currencies and oil getting whacked and traditional safe havens like bonds, gold, the yen and swissy getting plenty of love.

In times like this, we get a true sense of what investors consider to be real, reliable safe-havens. And bitcoin is off 8% today which has delivered a fatal blow to its safe-haven credentials, putting an end to another crypto myth that has surfaced over the years despite there being zero evidence to back it up. Maybe one day investors will have a different opinion but right now, when their cash is at stake, they’re sticking with safe-haven assets with a track record, as they should.

Pfizer has sought to calm nerves, stating that should a vaccine-escape variant emerge, it could produce a tailor-made vaccine in about 100 days. Three months can feel like a long time but when compared to where we were 18 months ago, that is very reassuring as a worst-case. It may not be quick enough to prevent more restrictions this winter though.

Turkish President Erdogan is successfully talking down the lira once again, claiming there’s no turning back from the new economy program and that interest rates will decline. It’s incredible to see a President have such disregard for something that will have such a huge impact on so many people. It’s like he’s playing with the markets to see what he can get away with. In a sign of Erdoganomics fatigue, the currency has quickly recouped the more than 2% losses it incurred immediately following the comments. A sign that these antics are now expected and priced in, it seems.

Oil is among the assets taking a heavy beating on the variant news today, falling more than 5% as traders fret about the impact on restrictions and behaviour this winter. Even without severe restrictions, people will adopt more caution which will weigh on demand, as OPEC+ has repeatedly stated and factored into their models.

It seems the US and other consuming countries have played their hand too soon. Sure, Biden will score some political points ahead of the midterms as voters see prices at the pump fall, which was ultimately the goal. But should prices spike again early next year, what then?

Crude is back at levels last seen at the start of October and if this risk aversion continues in the weeks ahead, there’s plenty of room to fall. While OPEC+ would likely have avoided altering production plans next week or in the months following in response to the SPR releases, it may soon feel its hand is being forced. Next week may come too soon but another major outbreak could see them slam on the brakes.

Times like this are when gold shines and we’re seeing investors flock back to an old reliable friend today. It has pulled a little off its highs after hitting $1,815 earlier in the session but it remains above $1,800 at the time of writing. It’s an interesting one for gold and bonds, as the situation now is very different from last year.

Central banks can’t just turn on the taps again with a “whatever it takes” avalanche of cheap cash as they have before. Inflation is a real problem and lockdowns will exacerbate the problem. Sure, they may be a little more patient and hold off on raising rates next month in the case of some or accelerating tapering in the case of the Fed, but they can hardly ramp up their stimulus measures in any considerable way. Their hands are tied.

This should still be bullish for gold as, at the very least, central banks will delay tightening until they have a better idea of the risks to the economy. Allowing inflation to run hot unaddressed could increase the hedge appeal of gold again, particularly in these uncertain times.

In recent weeks we’ve seen that, in times of real uncertainty, bitcoin has not done well as an inflation hedge or a safe haven asset. There’s no doubt it’s a fascinating tradable instrument and a highly speculative one, but it’s quite clear now that it’s a risk asset and nothing more. Not at the moment anyway. Who knows what the future holds.

It’s taking a real beating today, off around 8% and looking vulnerable. Key support around $55,500 has fallen which will now draw attention back to $50,000. I’m sure soon enough the eternal crypto bulls will pile back in and smell a bargain but as we’ve seen so often in the past, bitcoin is capable of enormous gains and eye-watering corrections.

If this new variant triggers major risk aversion in the markets, it could come under serious pressure. Unless of course, the inflation narrative catches again. No sign of it yet but, as ever with crypto, it has an incredible ability to find the bullish case in anything. Maybe this will be next. 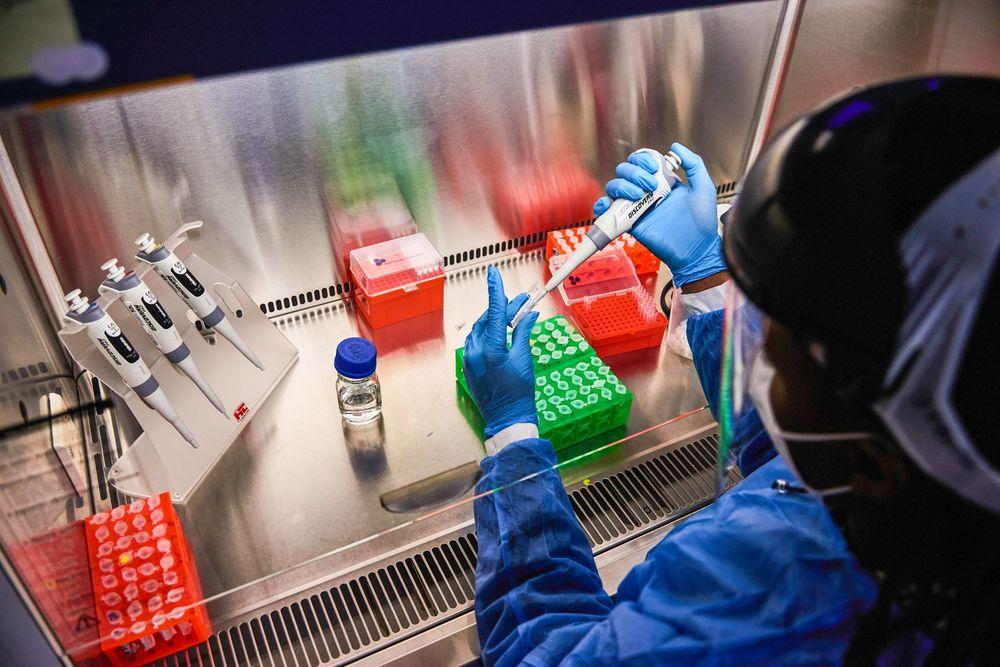 The new Covid-19 variant will temporarily wobble financial markets, but concerns will be quickly shrugged off by them, predicts the CEO of one of the world’s largest independent financial advisory, asset management and fintech organisations.

The prediction from deVere Group’s Nigel Green comes as a new Covid-19 strain discovered in southern Africa weighed on global markets on Thursday.  Travel stocks, hospitality firms, and bank stocks were amongst the hardest hit.

The World Health Organization will meet on Friday to analyse the new variant. The meeting will determine if the B.1.1.529 strain should be designated a variant of “interest” or of “concern.” The variant, which was identified on Tuesday, is said to carry an “extremely high number” of mutations.

On Friday, Asia Pacific markets were down around 2%, European stock futures predict a more than 2% drop at opening trades. Meanwhile, U.S. stock futures are also set to open lower, trading only until 1p.m. after Thursday’s Thanksgiving holiday.

Mr Green says: “Experts are determining whether the new variant is more transmissible or more deadly than previous ones.

“The fact that a new strain has been discovered and, critically, that at this stage we know little about it has caused jitters in the financial markets, which loathe uncertainty. The headlines have caused a knee-jerk reaction.

“In addition, Wall Street was closed yesterday meaning that a large bulk of global trades were missing, making other moves more pronounced.”

He continues: “This wobble is likely to be temporary with markets remaining bullish for the time being.

“Global shares have jumped 16% this year with investors focusing on the post-pandemic economic rebound. They largely shrugged off the Delta variant that caused a mini wave of market nerves in the summer.”

He goes on to add: “It’s likely that markets will do the same with this new variant.

“This is because, as Delta showed, mutations are now expected and we have more of a blueprint about how to deal with them.

“Instead, global financial markets will be focusing on other pressing issues including high inflation caused by supply side bottle necks and the likelihood of a quicker pull away from ultra-loose monetary environment.”

The deVere CEO concludes: “Markets will temporarily wobble on the uncertainty of this new Covid variant, but will remain bullish and largely focused on other issues.”