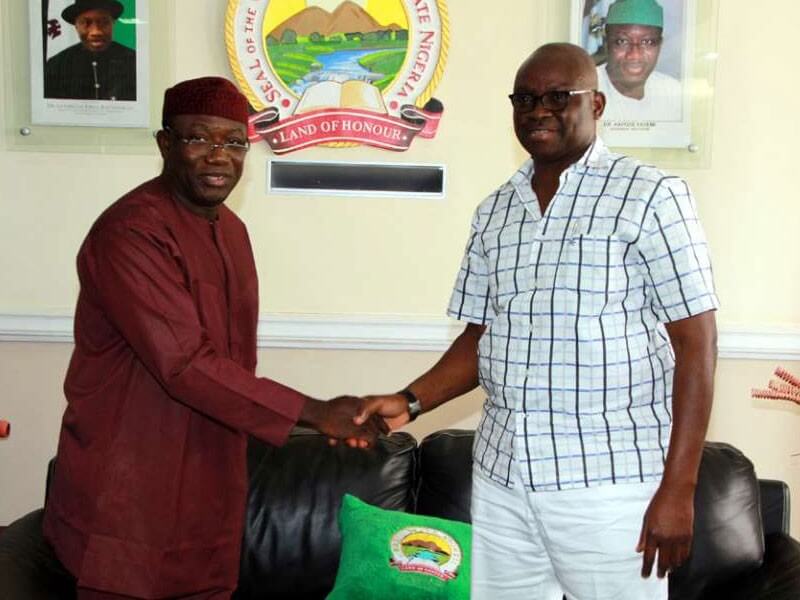 The Ekiti State governor-elect, Dr Kayode Fayemi, has asked the outgoing Governor, Mr. Ayodele Fayose, to devote the June 2018 federal allocation of N5.52 billion to the payment of salaries and other entitlements of workers.

A statement by Fayemi’s Media Director, Wole Olujobi, said that henceforth, Fayose must make accountability and human face critical factors in the policies of his administration.

He said the usual practice by the governor to collect federal allocations and call stakeholders meetings to deceive Ekiti people on the sharing formula between the state and local governments is no longer acceptable.

Urging Fayose to make accountability and transparency a cardinal policy of his administration in the run-up to the October 16, 2018 handover date, the statement said: “Information available to us suggests that Fayose at the weekend called all the directors in the state service to a meeting in the new Governor’s Lodge, pleading with them not to release sensitive information to the opposition, including non-disclosure of the state’s finances.

“But we want to say that the state has received N5.52b fresh June federal allocation and we demand that the money be spent to pay salary, and should not be subjected to the circus of lies and deceits that often accompanied the sharing of the allocations in the past whereby local governments were given their shares in the morning and in the night they would be coerced to return the money to the governor’s office while local governments workers remained unpaid for nine months.

“Fresh reports on the status of the state’s internally generated revenue (IGR) have indicated that between October 16, 2014 to date, the state has a revenue profile of N34,560,000,000 kept in secret accounts in one old generation bank account and another new generation account, yet there is nothing to suggest that the money was spent for the benefit of Ekiti people.

“At the State Water Corporation where opaque financial management has left the system in ruins, Ondo State had paid its counterpart fund of 40m for the upgrading of Egbe Dam, but Ekiti State Government has refused to honour its obligation to the project, even as the money paid by Ondo State cannot be traced to any government’s account.

“At Ero Dam, despite releasing N1b on paper out of N1.4b budgeted for the dam’s expansion, there is no sign of work going on there as we speak while in the same Water Corporation, two multi-million naira serviceable trucks were taken to Afao-Ekiti country home of the governor several months ago under pretext that they were being taken
there for repairs and up till now, the trucks are still not in the service of the Water Corporation.”

Meanwhile, workers have issued a 14-day ultimatum to Governor Fayose to pay all arrears of salaries and pensions of
retirees.

The workers acting under the aegis of Ekiti State Organised Labour, said the Fayose government must clear all arrears of workers’ entitlements before a new government takes office on October 16.

Their demands also include payment of over seven months deduction, payment of nine month arrears to local government workers and primary school teachers.

Also, the Conference of Nigeria Political Parties (CNPP), Ekiti State chapter, has warned civil servants in the state not to be part of alleged altering of official documents in a desperate attempt by Fayose to cover up some of the shoddy deals embarked upon by his administration.

The caution was contained in a release signed by the state Publicity Secretary of CNPP in Ekiti State, Olu Akomolafe, and made available to newsmen in Ado Ekiti on Sunday.

“It is now in public domain, the on-going alteration of government official documents by the government of Fayose after his party lost the July 14, 2018 governorship election in Ekiti State. All the desperate moves being evolved by the outgoing governor and his few cohorts are not hidden at all.

“Official documents from various ministries, agencies and parastatals are being inter-changed to make governance become cumbersome, equivocal and inexplicable to the incoming administration, hence hoarding or non-availability of necessary official documents needed to know how government activities were carried out in the four years of the present government in the state,” Akomolafe said.