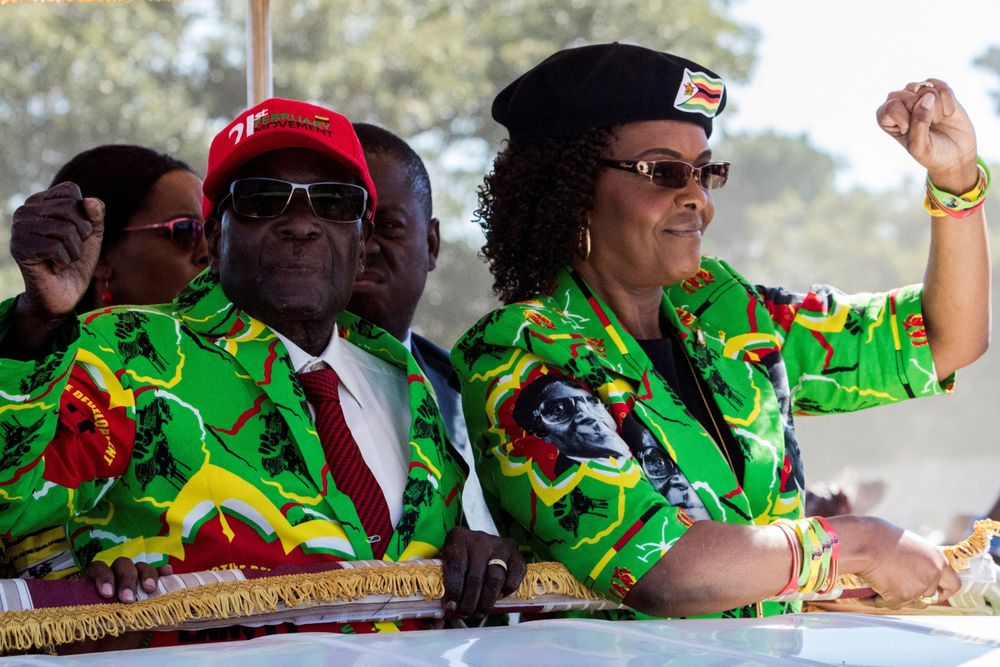 Zimbabwean President Robert Mugabe fired a vice president who his wife Grace accused of plotting against her husband for the second time in three years, highlighting the first lady’s rise to the pinnacle of power in the southern African nation.

The dramatic dismissal of Emmerson Mnangagwa on Monday came a day after Grace Mugabe publicly accused the former spy chief of plotting against the president. In 2014, similar allegations led to the ouster of Mugabe’s then deputy, Joice Mujuru, who like Mnangagwa fought in the liberation war against the white-minority regime of Rhodesia.

“It’s clear that Grace Mugabe is calling the shots,” said Alex Magaisa, a Zimbabwean law lecturer who is based in the U.K. and helped design Zimbabwe’s 2013 constitution. “No other person has wielded as much public power as Grace has, apart from her husband. She is certainly the most powerful person in Zimbabwe at the moment after Mugabe.”

Mnangagwa’s firing marks a decisive break by Mugabe with allies who fought in the independence war and propelled him to power in 1980 as well as a victory for Grace’s Generation-40 faction of younger members of the Zimbabwe African National Union-Patriotic Front. It comes amid growing tensions in the ruling party before elections next year when it may face a seven-party opposition alliance that’s capitalizing on public discord over cash shortages, crumbling infrastructure and a collapse in government services.

“We are not surprised with what happened yesterday,” Victor Matemadanda, secretary-general of the Zimbabwe National Liberation War Veterans Association, said by phone from Harare, the capital, on Tuesday. “It is the work of our erstwhile enemies since they have an agenda to remove every person who has liberation-war credentials. Those who have become dear to the dear leader are calling the shots, but as war veterans we are not going to be defeated.”

While Mugabe is the party’s candidate for the elections, Grace, the president’s former secretary whom he wed in 1996 after the death of his first wife, said on Sunday that she’s ready to succeed him.

Her announcement came as Zanu-PF is planning to amend its constitution at a congress next month to ensure that a woman is appointed to its top body, known as the presidium. It currently comprises the president, Mnangagwa and Zimbabwe’s other vice president, Phelekezela Mphoko.

Nicknamed “Gucci Grace” in Zimbabwe for her extravagant lifestyle, her lawyers filed suit last month in the High Court against a Lebanese national over his purported failure to supply a $1.35 million ring she’d ordered for her wedding anniversary. In August, neighboring South Africa granted her diplomatic immunity after she was accused of assaulting a woman in a Johannesburg hotel with an electric extension cord in a dispute involving her sons.

For Mnangagwa, the dismissal marks a stunning downfall for a leading candidate to succeed Mugabe and who’s been his comrade for the past 50 years during the armed struggle against Rhodesia and after independence.

In recent weeks, he lost his position as justice minister in a cabinet reshuffle and was publicly criticized by Mugabe. His faction of supporters is known as Lacoste, taken from the French sportswear company’s Lacoste’s logo, a crocodile — the nickname he earned during the liberation war.

The current divisions in the ruling party are the worst since Mugabe fired Mujuru as vice president. She’s now part of the opposition alliance that includes former Finance Minister Tendai Biti and ex-Prime Minister Morgan Tsvangirai.

Mnangagwa, who enjoys support in the military and among war veterans, will have to decide whether to go quietly or seek to reverse his downfall, either by challenging Grace Mugabe in the party or forging links with the opposition.

“As things stand, the Zanu-PF old guard is gone and the Mugabe’s have opened another opposition front as they have to contend with the Mnangagwa’s supporters,” Rashweat Mukundu, an analyst with the Harare-based Zimbabwe Democracy Institute, said by phone. “Zimbabwe is in uncharted waters.”