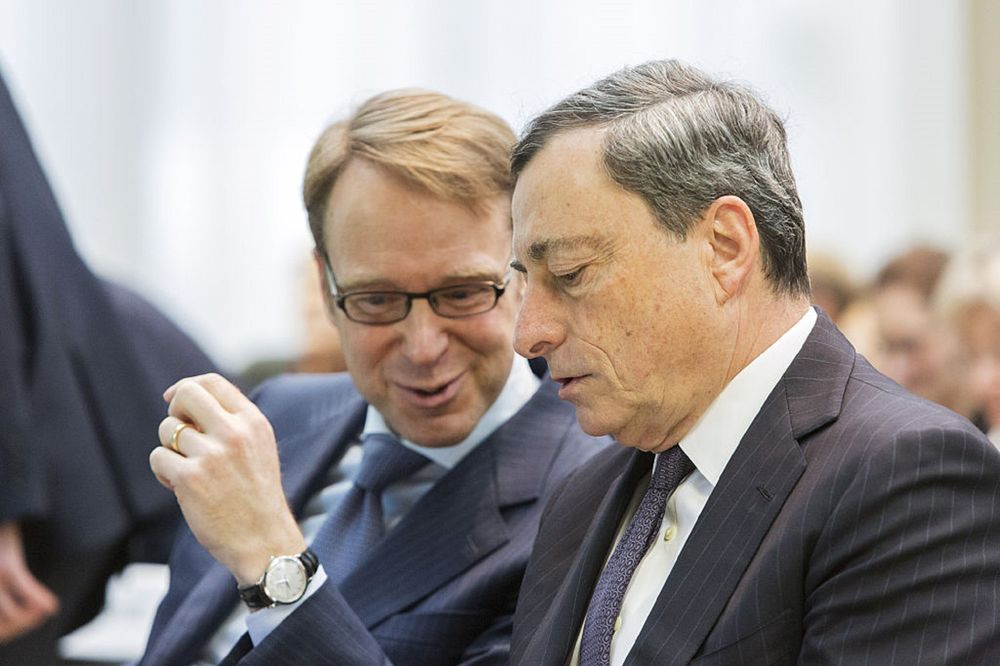 Board member Benoit Coeure, Bundesbank President Jens Weidmann and Bank of France Governor Francois Villeroy de Galhau were the heavyweights who recommended tying the overall level of monetary stimulus — rather than just asset purchases — to the outlook for prices, according to euro-area central-bank officials familiar with the matter.

The policy-setting Governing Council chaired by Draghi eventually decided on Oct. 26 to stick to its pledge to buy debt until it sees a sustained adjustment in the path of inflation toward its 2 percent goal. The broadening of the language that Weidmann and others sought would have potentially meant that bond purchases could be terminated even if consumer prices fail to pick up.

Peter Praet, the board member who formulates the proposals, opposed revising the stance, the officials said, asking not to be named because the meeting was confidential. Spokespeople for the ECB, Bundesbank and Bank of France all declined to comment.

The argument is an indication of how hard the 25-member council may find it to agree on stimulus next year. It intends to buy debt until next September, but has maintained the option to extend or increase the program if needed.

The central bank’s own projections don’t foresee inflation returning to the goal of just under 2 percent until at least late 2019. While that feeble consumer-price growth justifies pumping more liquidity into the economy, accelerating growth as well as concerns about financial stability and a limited supply of bonds to buy could justify a more cautious approach.

The calls for a change to the ECB’s guidance may not have won the day, but they still carry significant weight. Coeure is the ECB’s markets chief and was one of the architects of QE in the euro area; Weidmann and Villeroy de Galhau head the central banks of the bloc’s two biggest economies.

While the Governing Council wasn’t ultimately swayed, it did acknowledge the debate in a new sentence added to its statement, highlighting how central-bank stimulus is the result of several tools.

“This continued monetary support is provided by the additional net asset purchases, by the sizable stock of acquired assets and the forthcoming reinvestments, and by our forward guidance on interest rates.”

Draghi acknowledged after the meeting that the decision not to set a firm end-date for purchases wasn’t unanimous. Coeure didn’t oppose that outcome, according to the officials, but he said in an interview published on Oct. 29 that he hopes “this will be the last extension.”

Weidmann revealed his dissent a day after the meeting and Executive Board member Sabine Lautenschlaeger, also a German national, told Bloomberg Television on Tuesday that she wanted a “clear exit” from the program.