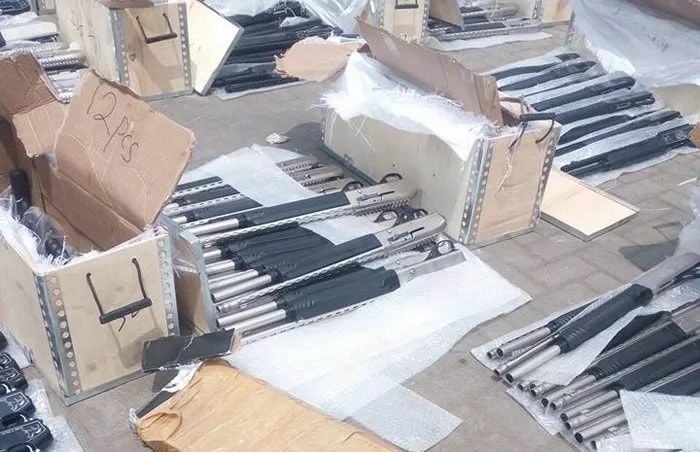 The Nigeria Customs Service has seized a container conveying 1,100 rifles at the Tin Can Island Port.

While disclosing the seizure to newsmen in Lagos on Monday, the Comptroller General of NCS, Col. Hameed Ali (retd.), stated that the rifles were discovered on September 6 by the operatives of the NCS intelligence unit.

He said the operatives had spotted a 1x20ft container with registration number GESU2555208 which was not previously listed for examination, positioned with other containers for the day’s examination.

The container became suspect and had to be immediately transferred to the Enforcement Unit where it was discovered that its seal had already been cut and padlocked.

Also, the Bill of Lading, according to the CGC, indicated that the contents were washbasins and water closets.

The container, which was conveyed by a vessel, MV Bella Shuttle, arrived in Nigeria on January 1, Ali said.

He disclosed that an official of the NCS, who allegedly authorised the cutting of the seal, and the terminal clerk had been arrested and were undergoing investigation.

“NCS under my leadership will do all that is possible to fish out all those remotely connected to this devilish importation. We shall bring them to justice,” he said.

Ali said the importation of 1,100 rifles at a time when the nation was undergoing security challenges was a clear indication that there were some elements who did not believe in the unity, peace and well-being of Nigerians.

He said, “This particular seizure being the third in the series of arms seizures within eight months of this year presents an all-time high of the triumph of the NCS over evil forces.

“The audacity of these criminals to think that they can succeed in smuggling such quantity of deadly weapons into the country calls for all round responsibilities.

“Shipping agencies and terminal operators must wake up to support the service to nip in the bud attempts to smuggle such dangerous items into the country.”