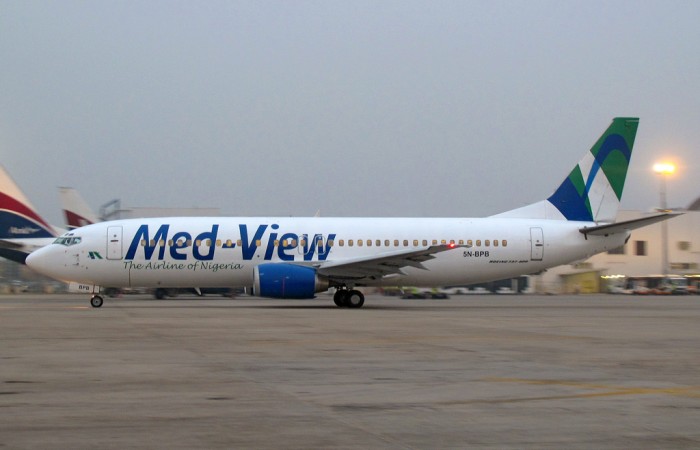 Med-view Airline Plc has reported a growth of 27 per cent in profit after tax (PAT) to N857 million for the half year ended June 30, 2017, compared with N672 million in the corresponding period of 2016.

The results of the only airline listed on the Nigerian Stock Exchange (NSE), indicated that gross revenue grew by 48 per cent from N8.7 billion to N13.007 billion in 2017.

Operating cost shot up from N7.748 billion to N9.982 billion, propelled by rise in aviation fuel cost and cost of lease of aircraft for local operations.

For instance the airline spent N1.257 billion on lease of aircraft in H1, compared with nothing in the corresponding period of 2016.

Med-view Airline therefore ended the H1 with a profit before tax (PBT) of N945 million, from N739 million and a PAT of N857 million as against N672 million.

The Managing Director of Med-view Airline Plc, Alhaji Muneer Bankole recently told the shareholders at the annual general meeting (AGM), that the company’s growth in aviation industry had continued with accelerated efforts and has stood out significantly among her contemporaries.

According to him, the company has continued to soar higher from the maiden flight in 2007 with Hajj operation.

Bankole explained that the airline has been able to spread to various parts of the world covering domestic, regional and international flights.

He said, demostically, the airline have flights to Abuja, Port Harcourt, Kaduna, Owerri, Yola, Maiduguri, Enugu, and Kano, while on the regional routes, it has Accra (Ghana); Freetown(Sierra Leone) and Monrovia (Liberia), which are currently operational.

The MD said their international route covers Jeddah and London and planning to include Dubai, United States of America and South Africa this year.

Following the need to inject more capital, the shareholders of Medview Airline have already authorised the directors to “raise additional capital via issue of debt instruments, preference shares or ordinary or a combination of any of these options by way of private placement, rights to existing shareholders, offer for subscription or any staff share scheme.