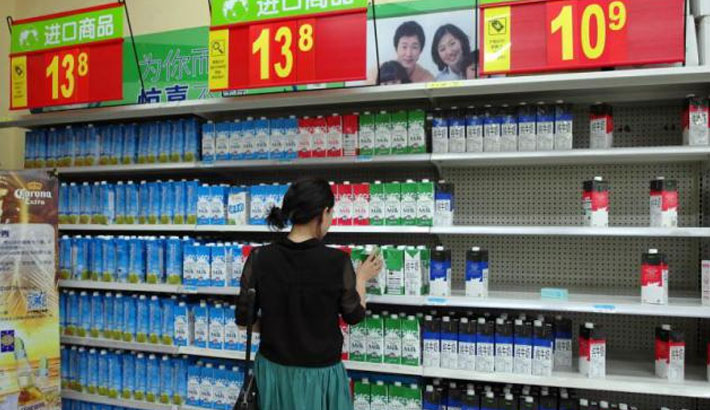 China’s economy accelerated for the first time in two years in the final quarter of 2016, cementing an economic stabilization that’s giving leaders a buffer as they transition to neutral policy and prepare for potential trade tensions with Donald Trump.

Gross domestic product increased 6.8 percent in the three months through December from a year earlier, compared with a 6.7 percent median estimate in a survey. The full-year expansion of 6.7 percent was the slowest since 1990, but still landed right in the middle of the 6.5 percent to 7 percent official target.

China powered through a volatile start to the year with strength that surpassed expectations, propelled by robust consumption from an increasingly wealthy middle class. With manufacturing also rebounding and deflation tamed, the central bank is turning to neutral policy to address a debt binge that inflated asset bubbles during a two-year easing cycle.

“As China’s traditional growth drivers of investment and exports have weakened, Chinese private consumption has become the key engine for economic growth,” said Rajiv Biswas, Asia-Pacific chief economist at IHS Global Insight in Singapore. “This trend is expected to continue over the medium term.”

That points to continued stable growth ahead of a twice-a-decade Communist Party leadership reshuffle this year. Consumption contributed 64.6 percent to 2016 growth, a statistics official said at a briefing in Beijing. Services, which accounted for more than half of output for the first time in 2015, made up 51.6 percent last year, official data showed.

Yet, behind the solid headline figures, there’s a widening divergence among regions and industries that’s creating winners and losers across the nation of 1.4 billion people.

The full-year expansion in 2017 will edge lower to 6.4 percent, Bloomberg economist surveys show, while the International Monetary Fund has raised its forecast to 6.5 percent. Maintaining growth requires fending off policy challenges including a slumping yuan that posted its biggest annual drop in two decades and increasing capital flight pressure.

Policy makers unleashed more fiscal stimulus last year to help prop up growth, in addition to keeping the old benchmark interest rate at a record low. New money supply management tools are coming to the fore as an alternative to broad easing that could weaken the yuan.

Reflation has been a bright spot as the producer price index snapped four years of deflation. Manufacturing has strengthened with official gauges at or near multi-year highs.

Beyond those promising signals, exports have fallen for months amid tepid global demand. That’s just as China’s government prepares for potential trade tensions with Trump.

While the economic rebalancing toward consumer-led growth continues, reforms of inefficient state-owned enterprises in heavy industries have stalled as the old smokestack economy came roaring back last year, competing more for capital against private firms.