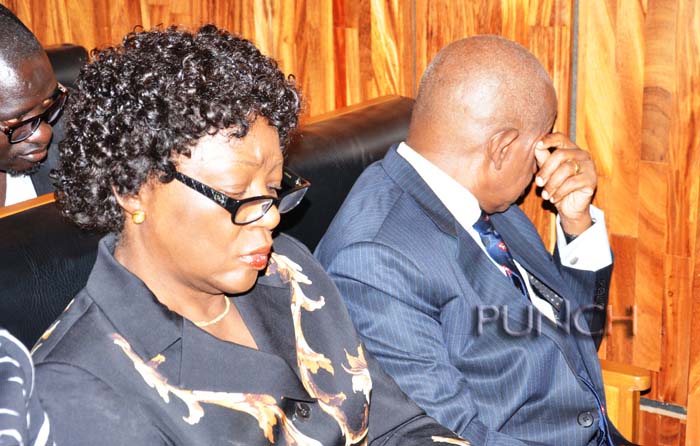 A High Court of the Federal Capital Territory, Maitama, Abuja, on Tuesday granted bail in self-recognisance to a judge of the Federal High Court in Abuja, Justice Adeniyi Ademola and his wife, Olabowale, who is the Head of Service of Lagos State.

Justice Jude Okeke granted a N100m worth of bail to the couple in self-recognisance on Tuesday, shortly after the two were arraigned on 11 counts including, being in possession of firearms without valid licence, conspiracy to receive gratification and receiving gratification of N30m from Joe Agi and Associates, between March 11 and March 26, 2015.

The judge granted bail to the defendants in the sum of N50m each, totalling N100m for the two of them.

But since the bail was granted in self-recognisance, the two defendants were not required to produce sureties to guarantee their release.

They would only need to sign bail bonds worth N50m each in addition to depositing their passports and other travel documents with the court in order to fulfil their bail conditions.

The judge easily granted bail to the accused persons because the application filed by the defendants were not opposed by the prosecuting counsel, Mr. Segun Jegede.

The couple, who had arrived the court much earlier before the proceedings began on Tuesday, answered to their charges while standing in the dock.

They remained standing until the prosecuting counsel sought Justice Okeke’s permission to allow the defendants to sit down and chairs were subsequently provided for them while the judge was writing his ruling on the accused persons’ bail application.

After the judge delivered the ruling on bail, Jegede sought to begin trial with an opening speech as provided for in the provisions of the Administration of Criminal Justice Act.

But the defence lawyers objected on the grounds that they had not been served with all the statements made to the Department of State Services by the defendants.

The prosecuting counsel promised to make the statements available to the defence lawyers, but said that was not sufficient to stop him from going ahead with his opening remarks.

Justice Okeke then adjourned till January 18, 2017 for commencement of trial.