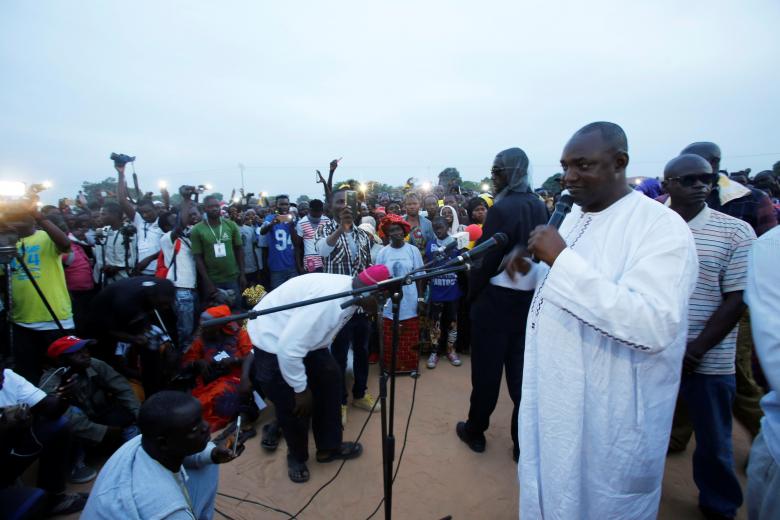 The Gambia’s opposition candidate, Adama Barrow, yesterday pulled off a stunning victory, comfortably winning a presidential election and putting an end to the 22-year rule of President Yahya Jammeh.

Jammeh, who has ruled The Gambia for 22 years, has conceded defeat to Barrow, the chairman of the country’s Independent Electoral Commission (IEC) said yesterday.

This follows the precedent set in African presidential elections by Nigeria’s former President, Dr. Goodluck Jonathan, who conceded defeat to and congratulated current President Muhammadu Buhari in last year’s elections, even before the formal announcement of the full results of the make of mar election, thereby pulling the country from the brink.

“It’s really unique that someone who has been ruling this country for so long has accepted defeat,” Alieu Momar Njie told reporters in Banjul ahead of the release of the results of Thursday’s presidential election.

Chairman of the Independent Electoral Commission (IEC) said, as Gambians began to take to the streets to celebrate the biggest upset in the West African country since Jammeh seized power in a 1994 coup.

His campaign manager, Yankuba Colley, said he was not aware of the electoral commission chairman’s statement but said he believed the President would step down if the Gambian people wanted it.

Jammeh, who was running for a fifth term, once said he would govern for a billion years if God willed it, was attempting to win a fifth term with his Alliance for Patriotic Reorientation and Construction (APRC).

On the streets of Bakau, a district on the outskirts of Banjul, Gambians began an impromptu street party, drumming, dancing and honking car horns.

“This man (Jammeh) beat and oppressed us,” a young man, who gave his name as Jawara told AFP, adding: “We didn’t have our freedom, but definitely Barrow will give it to us.”

Gambian state television told AFP that Jammeh would make a statement later in the day to congratulate 51-year-old Barrow, a previously unknown estate agent and former economic migrant to Britain, who was chosen as the opposition flag-bearer by a group of political parties that had joined forces for the first time, whipping up unprecedented popular support.

Barrow told AFP before the vote was announced that he was “certain” he had won.

He would likely serve a three-year term at the head of a transition reform government in the tiny former British colony that occupies a narrow sliver of land surrounded by French-speaking Senegal and pristine Atlantic Ocean beaches beloved by tourists.

Security forces had been deployed heavily in Banjul earlier yesterday amid nervousness over whether Jammeh would accept a ballot box defeat.

Before dawn broke, military and police, some covering their faces, set up checkpoints every few hundred metres on the outskirts of the capital, while citizens remained inside sleeping or watching the results come in.

“Power belongs to the people. You cannot stop us and you cannot stop them,” Barrow said at his final rally this week, while Jammeh predicted the biggest landslide of his political career and warned that protests over the election result would not be tolerated, saying The Gambia “does not allow” demonstrations.

A deeply devout Muslim, Jammeh was born in the western village of Kanilai in 1965, the year that The Gambia gained independence from Britain.

Jammeh joined the army in 1984 and 10 years later, mounted a coup with fellow army officers against then President Dawda Jawara, who had ruled the country since independence, pledging to root out corruption and hold elections.

After giving up his rank of colonel to allow him to contest elections as a civilian, Jammeh swept the vote in 1996, 2001, 2006 and 2011, following a 2002 constitutional amendment removing presidential term limits.

Trump Appoints Adebayo Ogunlesi As Part of His Economic Team

Kebbi Approves N1.6b for Expansion of 13 Hospitals, Others