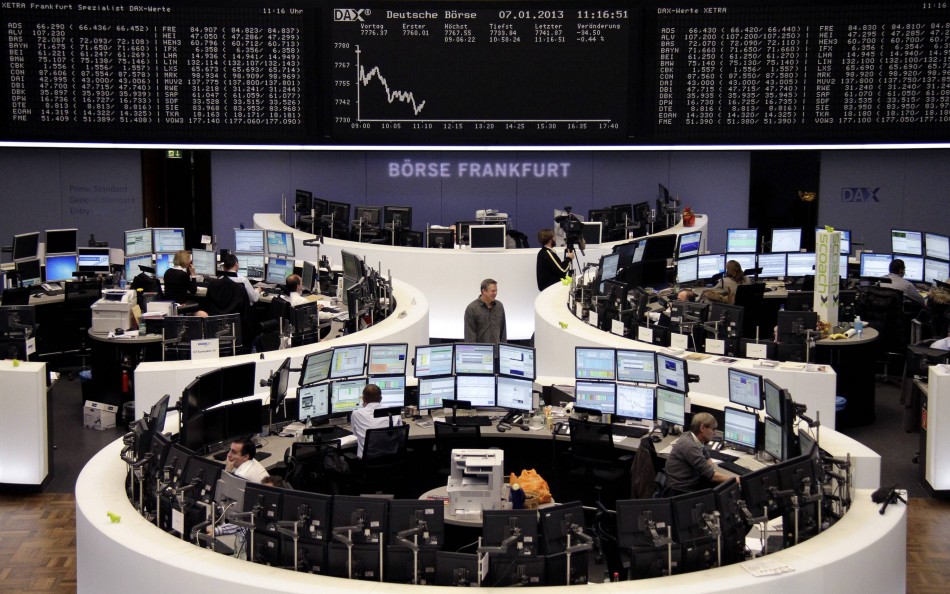 Global markets were thrown into disarray as results from the U.S. election indicated that Donald Trump may prevail over Hillary Clinton in the race for the presidency, shocking traders who had focused on polls in recent days showing the opposite.

Panicked investors rushed to unwind bets they’d piled on amid predictions Clinton would sweep to victory, fueling demand for haven assets. Futures on the S&P 500 Index plunged by a 5 percent limit that triggers trading curbs and Asian shares sank by the most since the aftermath of Britain’s shock vote to leave the European Union. Mexico’s peso had its steepest plunge since 2008 on concern a Trump win would lead to more protectionist U.S. trade policies. Gold jumped by the most since Brexit, surging with the yen and sovereign bonds.

Based on the states that have been called, Trump had 244 of the 270 Electoral College votes needed to claim the White House and Clinton had collected 215, while the Republicans were also on track to retain control of Congress. A Trump victory, buttressed by electoral gains from Florida to Ohio, had been portrayed by analysts as having the potential to unhinge markets that were banking on a continuation of policies that coincided with the second-longest bull market in S&P 500 history. Brexit was the last major political shock and led to the S&P 500 sliding 5.3 percent in two days.

“With more votes being counted and it looking more and more like Trump will actually get in, the market’s having a massive dive,” said Karl Goody, a private wealth manager at Shaw and Partners Ltd. in Sydney, which oversees about A$10 billion ($7.6 billion). “This has caught a lot of people off guard. We’re all very surprised.”

Most polls showed Democratic candidate Hillary Clinton ahead of Trump going into the vote and websites that took bets on the victor had put the Democrat’s odds of winning at 80 percent or more. Trump pledged to clamp down on immigration to the U.S. and renegotiate free-trade agreements with countries including Mexico.

Among key moves in financial markets:

S&P 500 futures tumbled by the maximum 5 percent loss permitted on the Chicago Mercantile Exchange before trading curbs are triggered, and were down 4.3 percent as of 3:20 p.m. Tokyo time. The restrictions last came into force in the wake of the Brexit vote and set a floor price for the contracts through the remainder of the overnight trading session.

The MSCI Asia Pacific Index was down more than 2 percent, with benchmarks in India, Japan and New Zealand posting the biggest declines in the region.

“If Trump becomes president and both the House and Senate are Republican, he can do whatever he likes,” said Norihiro Fujito, a Tokyo-based senior investment strategist at Mitsubishi UFJ Morgan Stanley Securities. “We’re in the midst of a violent unwinding of positions globally as investors deal with an unexpected, risk-off situation.”

Mexico’s peso plunged to a record low of 20.7818 per dollar, and was the worst performer among currencies worldwide. Other higher-yielding currencies sank, with South Africa’s rand weakening 3.1 percent and South Korea’s won down 1.1 percent.

“This would be the biggest political upset in living memory,” said Jeremy Cook, chief economist at London-based World First U.K. Ltd. “The significance is almost unquantifiable.”

Currencies viewed as havens strengthened, with the yen climbing 2.6 percent and the Swiss franc gaining 1.6 percent.

Treasuries rallied as traders saw the likelihood of the Federal Reserve interest-rate increase in December dwindling to less than 50 percent, based on overnight indexed swaps. The yield on the 10-year note declined four basis points to 1.82 percent. Its daily trading range — 0.18 percentage point — was the largest since June 24, the day after the Brexit vote.