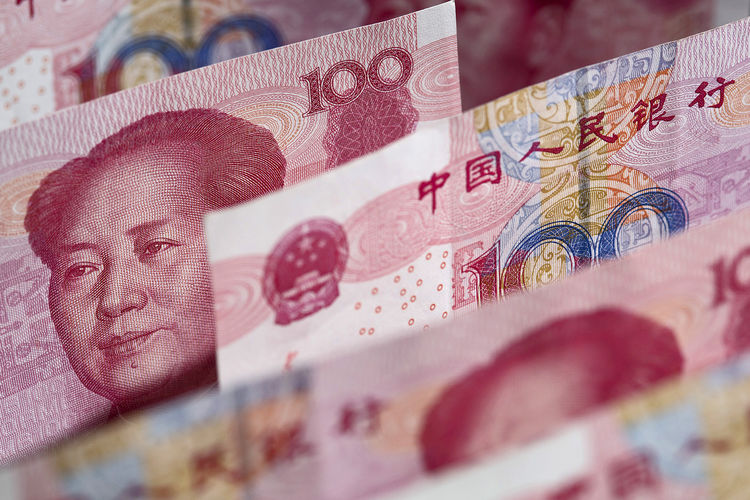 The yuan dropped the most in a month after the central bank weakened the currency’s reference rate and the dollar rebounded.

The onshore exchange rate declined 0.3 percent to 6.7748 a dollar as of 12:02 p.m. local time, its biggest drop since Oct. 10. The currency rallied 0.4 percent last week, its best performance since July, as a tightening U.S. presidential election race dragged down the greenback. The yuan fell to a record low against a basket of currencies.

A gauge of the dollar’s strength gained for the first time in seven days on Monday, after the FBI said it stuck by an earlier finding that Hillary Clinton didn’t commit a crime in her handling of e-mails as secretary of state. The odds of an interest rate increase by the Fed in December rose to 76 percent, more than five percentage points higher than they were two weeks ago.

“The yuan will drop against the dollar and a basket of currencies in the coming days, as the PBOC has been engineering the depreciation to preempt any sharp spikes after the U.S. election or a Federal Reserve rate hike,” said Iris Pang, senior economist for Greater China at Natixis SA in Hong Kong. Policy makers “can control the pace of depreciation with stronger fixings and direct intervention if there are any signs of stress.”

China’s foreign-exchange reserves may have dropped by $34 billion to $3.13 trillion in October, according to the median forecast of economists in a Bloomberg survey. The figures are due to be released later Monday.

The Bloomberg replica of the CFETS RMB Index, which tracks the yuan against 13 exchange rates, dropped for a fifth day to 93.74 Monday. That’s the lowest since the gauge was introduced in December. The People’s Bank of China cut the yuan’s daily reference rate by 0.31 percent, the most since Oct. 21. The offshore rate slid 0.17 percent.

China’s monetary authority was speculated to be propping up the yuan during the run-up to a Group of 20 meeting in September and the yuan’s entry into the International Monetary Fund’s reserves on Oct. 1. The PBOC was then seen pulling support, leading to a 1.5 percent tumble last month as a gauge of dollar strength surged on mounting bets of Fed tightening.

The central bank drained a net 140 billion yuan ($20.7 billion) in open-market operations on Monday, the most in three weeks, data compiled by Bloomberg show. The monetary authority has stepped in to pull funds from the financial system since offering 437 billion yuan of loans to lenders via Medium-term Lending Facility on Nov 3.

The overnight repurchase rate, a gauge of interbank funding availability, fell for a sixth day, the longest losing streak since January. The rate fell one basis point to 2.09 percent Monday, weighted average prices show. The yield on government notes due in a decade rose one basis point to 2.75 percent, according to National Interbank Funding Center prices.