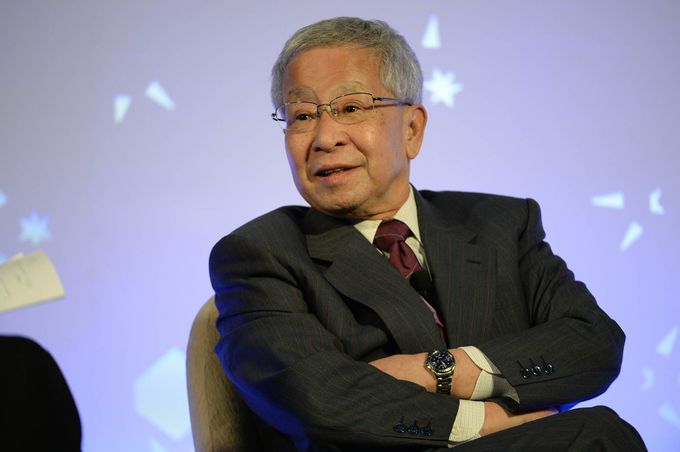 Japan’s former top currency official Eisuke Sakakibara says the the nation’s central bank stimulus is nearing its limit, and the yen will gradually strengthen toward 90 per dollar next year.

Japan’s currency gained the most since July last week, touching 100.10 on Thursday, the day after the Bank of Japan shifted policy toward targeting the shape of the sovereign yield curve instead of money-supply expansion, while leaving the negative deposit rate and scale of asset purchases unchanged. The yen could break 100 “at any time,” and may “immediately” strengthen as far as 95, according to Sakakibara, who was dubbed “Mr. Yen” for his ability to influence the exchange rate while a senior Ministry of Finance bureaucrat in the 1990s.

“The yen would probably have a slow appreciation, so that I would not be surprised to see dollar at 90 yen at the end of next year,” the 75-year-old, who is now a professor at Aoyama Gakuin University, said in an interview Monday. “At the very least, monetary easing is getting exhausted. They’ve been doing it for a long time. The effect is getting weaker and weaker.”

With its latest stimulus tweaks, Japan’s central bank has effectively positioned itself for the long haul, also scrapping a two-year time frame for achieving 2 percent inflation. After Governor Haruhiko Kuroda started quantitative-and-qualitative easing in April 2013, the yen depreciated as much as 26 percent versus the dollar to a 13-year low of 125.86 in June 2015. With the BOJ now cornering 36 percent of the Japanese government bond market, doubts have grown about the sustainability of the program. The surprise introduction of a negative-rate policy in January of this year only weakened the yen for one day.

Sakakibara says it’s unlikely the central bank will aggressively ease monetary conditions further. While a deepening of the negative deposit rate “is not unthinkable,” the probability is low because the policy has not been well received by financial institutions or the general public, he said.

Kuroda reiterated Monday there is no limit to monetary policy, and said talk of limits is not helpful at all.

The yen was at 100.93 per dollar as of 3:48 p.m. in Tokyo. It surged to as high as 99.02 on June 24, in the immediate aftermath of the U.K. referendum decision to leave the European Union. It is the best-performing developed-market currency in 2016 with a 19 percent appreciation versus the dollar.

Sakakibara accurately predicted the currency’s advance this year from near 120 per dollar to beyond 100 for the first time since 2013, defying the consensus among analysts at the start of the year for it to fall to 124. The median estimate remains that the yen will end the year weaker at 104 per dollar.

Strength in the yen has been exacerbated by the Federal Reserve’s decision to refrain from raising rates so far in 2016. Futures signal 55 percent odds of tighter policy by the end of this year.

Given the diverging outlook for monetary policy between the U.S. and Japan, some appreciation of the yen against the dollar “is only natural,” according to Sakakibara. However an exchange rate of 95-100 would be all right for the Japanese economy.

“This level of yen strength is not a crisis,” he said. “If it breaks 90 and hits 80, then I would start to consult with the U.S. for joint intervention.”