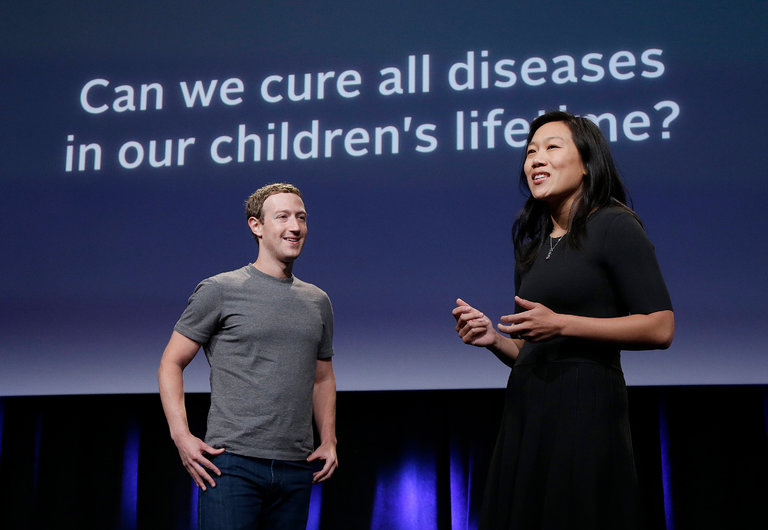 Mark Zuckerberg, Facebook’s chief executive, and his wife, Dr. Priscilla Chan, last year said they would give 99 percent of their Facebook shares to charitable causes. Now they are putting a large chunk of that money to work.

The Chan Zuckerberg Initiative, the limited liability company into which Mr. Zuckerberg and Dr. Chan put their Facebook shares, on Wednesday said it would invest at least $3 billion over the next decade toward preventing, curing or managing all diseases by the end of the century.

While the Chan Zuckerberg Initiative has already made investments in charter schools and education start-ups, the money toward curing diseases represents the group’s first major initiative in science. The announcement was also a coming out of sorts for Dr. Chan, who has a big interest in health and was trained in pediatrics.

In a speech to introduce the health initiative at an event in San Francisco on Wednesday, Dr. Chan said the work to cure disease was in keeping with her organization’s mission to advance human potential and promote equality. She gave an emotional preamble, describing how a high-quality education helped her succeed as the daughter of Chinese and Vietnamese immigrants.

“We want to dramatically improve every life in Max’s generation and make sure we don’t miss a single soul,” Dr. Chan said, referring to her and Mr. Zuckerberg’s infant daughter, Maxima. “We’ll be investing in basic science research with the goal of curing disease.”

The event was attended by Mayor Ed Lee of San Francisco; Janet Napolitano, the president of the University of California and former secretary of homeland security; and investors including Yuri Milner, who backed Facebook before it went public. About 63,000 people watched the event on Facebook Live and there were about 450 attending.

Several of Mr. Zuckerberg’s Facebook co-founders or early executives have also pledged money to charity or specifically toward health initiatives. Dustin Moskovitz, a Facebook co-founder, is part of the Giving Pledge, through which the world’s wealthiest individuals and families have dedicated a majority of their wealth to philanthropy. Sean Parker, who was president of Facebook when the company was still a start-up, earlier this year said he would give $250 million to six cancer centers nationwide.

Other tech billionaires have also given to public health, including Bill Gates, Microsoft’s co-founder. His Bill & Melinda Gates Foundation gave $10.2 billion through 2014 to global health initiatives like fighting AIDS, tuberculosis and malaria.

Mr. Zuckerberg and Dr. Chan, who are also part of the Giving Pledge and have looked up to Mr. Gates, announced the Chan Zuckerberg Initiative at the end of last year. At the time, their Facebook holdings were valued at around $45 billion.

The Chan Zuckerberg Initiative’s structure as a limited liability company gives it freedom to also spend on for-profit companies and political donations. Some traditional philanthropies, which have spending restrictions and targets they must meet, disapprove of the L.L.C. structure.

The Chan Zuckerberg Initiative’s science work will be led by Cori Bargmann, a neuroscientist at Rockefeller University in New York. The first project will be the Chan Zuckerberg Biohub, an independent research center in San Francisco that will bring together engineers, computer scientists, biologists, chemists and others. Formed in partnership with Stanford, the University of California, Berkeley, and the University of California, San Francisco, it will receive initial funding of $600 million over 10 years.

At the event Wednesday, Mr. Zuckerberg said that if his organization’s plan to cure or manage all disease worked, it should increase human life expectancy to 100 years.

“That doesn’t mean no one will ever get sick,” he said. “But they should be able to treat it and manage it.”