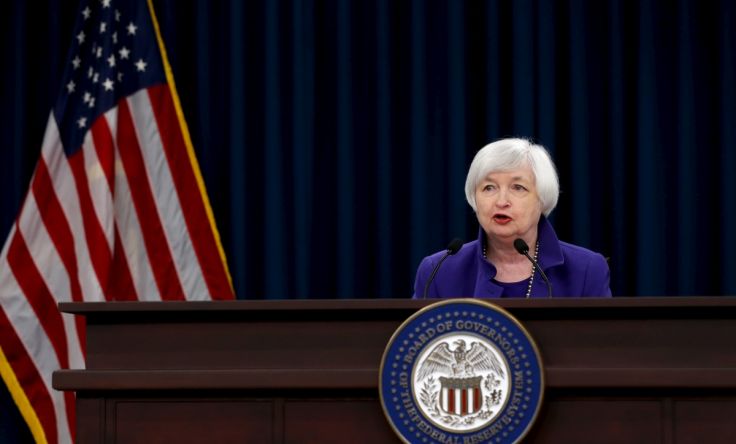 A divided Federal Reserve left its policy interest rate unchanged to await more evidence of progress toward its goals, while projecting that an increase is still likely by year-end.

“Near-term risks to the economic outlook appear roughly balanced,” the Federal Open Market Committee said in its statement Wednesday after a two-day meeting in Washington. “The Committee judges that the case for an increase in the federal funds rate has strengthened but decided, for the time being, to wait for further evidence of continued progress toward its objectives.”

The sixth straight hold extends U.S. central bankers’ run of getting cold feet amid risks from abroad and inconsistent signs of economic strength. Now the focus will shift to December as the Fed’s likely last chance to raise interest rates in 2016 — a move that depends on how the economy, inflation and markets fare in the months surrounding a contentious presidential election.

“The statement is much more hawkish than I thought it would be,” said Stephen Stanley, chief economist at Amherst Pierpont Securities LLC in New York, who said he expects a rate increase in December. “That just tells you they are revving up the engines.”

Three officials, the most since December 2014, dissented in favor of a quarter-point hike. Esther George, president of the Kansas City Fed, voted against the decision for a second straight meeting. She was joined by Cleveland Fed President Loretta Mester — in her first dissent — and Eric Rosengren, head of the Boston Fed, whose previous dissents called for easier policy.

“Our decision does not reflect a lack of confidence in the economy,” Fed Chair Janet Yellen said at the start of her press conference. “Since monetary policy is only modestly accommodative, there appears little risk of falling behind the curve in the near future.”

Stocks climbed with Treasuries after the decision, while the dollar declined and gold rallied. The Standard & Poor’s 500 Index extended gains after the Fed’s statement, while a gauge of the U.S. yield curve flattened as the shortest-maturity debt underperformed. The greenback lost ground against all but two of its major peers.

The central bank’s so-called “dot plot”, which it uses to signal its outlook for the path of interest rates, showed that officials expected one quarter-point rate increase this year. Three policy makers projected that keeping rates unchanged this year would be most appropriate. Officials scaled back expectations for hikes in 2017 and over the longer run.

Policy makers see two rate hikes next year, down from their June median projection of three.

The Fed said that the labor market will “strengthen somewhat further,” adding the qualifier “somewhat further” to similar language from the July statement.

“Although the unemployment rate is little changed in recent months, job gains have been solid, on average,” the Fed said in its statement. “Household spending has been growing strongly but business fixed investment has remained soft.”

The target range for the benchmark federal funds rate remains at 0.25 percent to 0.5 percent, where it’s been since a quarter-point increase in December 2015 that ended seven years of near-zero rates.

The Fed repeated that it “continues to closely monitor inflation indicators and global economic and financial developments.”

The FOMC reiterated that borrowing costs will probably rise at an “only gradual” pace. Policy makers also reiterated that they expect inflation to rise to their 2 percent goal over the medium term.

Because November’s FOMC meeting comes within a week of the U.S. presidential election and isn’t followed by a press conference with Yellen, economists have viewed the Fed’s December meeting as a more likely candidate for an increase.
The latest decision could embolden Republican presidential nominee Donald Trump to unleash additional attacks on Yellen. The billionaire businessman said last week that the Fed “is being totally controlled politically” and might stand pat on rates for the rest of year.

Yellen, a former economics professor at the University of California at Berkeley, was appointed Fed chair by President Barack Obama and served as President Bill Clinton’s top economic adviser.

The decision comes as Fed officials become more convinced that the economy is experiencing a new normal.

Policy makers scaled back their median projection of the long-term interest rate to 2.9 percent from 3 percent in June. The estimate shows how high officials think rates can climb, so its downgrade suggests a shallower hiking cycle.

Fed officials also cut their median growth projection for 2016 to 1.8 percent from 2 percent, mirroring the drop in the longer-run forecast, based on median estimates. Inflation is projected at 1.3 percent in the fourth quarter, down from a forecast of 1.4 percent in June. Policy makers again projected that inflation will reach the 2 percent target in 2018.

Most economists had expected the committee to stay on hold, assigning just a 15 percent chance of a hike this month. Fed watchers saw a 54 percent probability that the Fed will raise rates at its December 13-14 meeting.

Yellen is scheduled to hold a press conference at 2:30 p.m. in Washington. It will be her first public remarks since a speech last month, when she said that the case for an interest-rate increase “has strengthened in recent months.”

Nonfarm payrolls have climbed by 182,000 jobs on average so far this year, although the most recent report showed a cooling to 151,000 job gains along with moderating wage increases. Other figures have shown declines in August retail sales and industrial production, as well as drops in sentiment at service companies and manufacturers.

Inflation is still running below the Fed’s 2 percent goal. After picking up earlier in the year, annual gains in the headline personal consumption expenditures price index slowed to 0.8 percent in July. Core inflation, which excludes food and fuel costs, is firmer though still undershooting at 1.6 percent.

Meanwhile, inflation expectations have stayed relatively low. A gauge of market-based expectations watched by the Fed is projecting a pace of price gains of about 1.5 percent in the period five to 10 years out.

The Fed repeated on Wednesday that “market-based measures of inflation compensation remain low.”