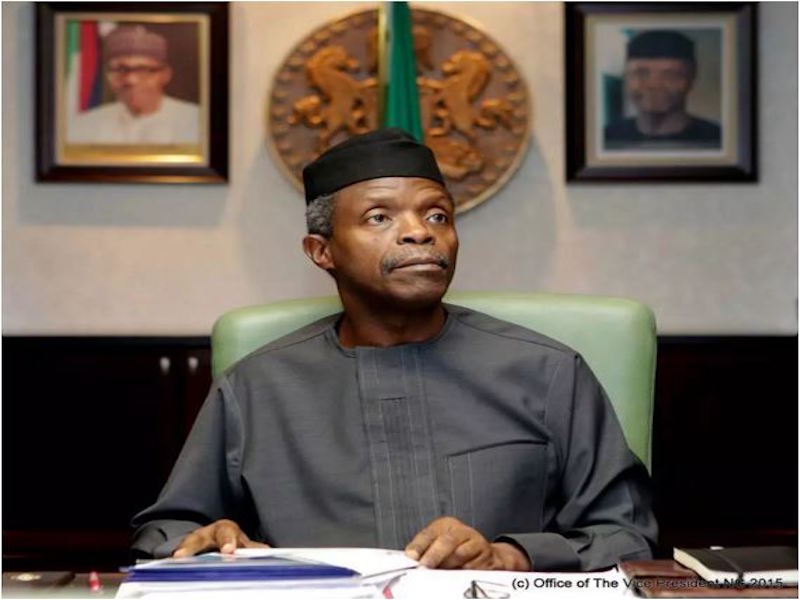 Vice-President Yemi Osinbajo says Nigeria has been losing one million barrels of crude oil daily in the last six months due to the activities of pipeline vandals.

Osinbajo, who is the head of President Muhammadu Buhari’s economic team, disclosed this on Tuesday while receiving a delegation of the Northern States Pentecostal Bishops Forum in his office at the Presidential Villa, Abuja.

Nigeria had lost at least 180 million barrels of crude oil in less than one year.

A statement signed by Osinbajo’s spokesman, Laolu Akande, read in part, “In addition to the massive fall in oil prices, the VP stated that the vandalism of pipelines had led to a worsening of the situation with the country losing about one million barrels of oil per day for up to six months now. The vandalism has equally cut power supply short since gas pipelines were also destroyed.”

According to the Vice-President, there is no country in the world that can face the kind of stealing that has taken place in Nigeria without having to deal with the consequences, including the current state of the economy.

He, however, assured Nigerians that even though the times were hard today, “there is great hope that this country will prosper.”

“This country has been badly governed. We are dealing, for instance, with the embezzlement of funds to the tune of $15bn in one sector alone.”

Osinbajo dismissed suggestions that the Buhari administration should stop blaming past governments.

He added, “We have to, that is why we are here. We have not turned attention to the oil and gas sector, where the former CBN governor alleged that $20bn was stolen. We must condemn and stand up against this level of corruption. It is the single most important reason of the current state of the country. We can’t ignore it.”

Responding to the views of the leader of the delegation, Archbishop John Daniel, that members of the forum had been actively involved in the fight against corruption in Nigeria, the VP said indeed the “country has been systematically destroyed.”

He added, “Our currency depreciated because we don’t have the reserves to back it. At the height of the oil boom, there were no savings.”

The senior advocate said that the recent GDP figures released last week indicated clearly there is growth in agriculture and solid minerals.

The social investment programmes, according to the Vice-President, are on course, reassuring the nation “that very soon, the 500,000 jobs scheme will take off,” alongside other schemes.

Earlier, Archbishop Daniel expressed the support of the forum for the diversification of the Nigerian economy by the Buhari administartion but asked the Federal Government to ensure that violent herdsmen were brought to book.

In his response, Osinbajo noted that Buhari had given clear instructions to the security agencies to arrest and prosecute anyone, regardless of status, who carried arms and perpetrated violence.

He, however, lamented that the justice system needed reforms to ensure speedy prosecution.