Foreign currency speculators, who launched an unprecedented attack against the naira in the last two weeks, got their fingers burnt on Tuesday when the nation’s currency staged a major recovery, rising to N310 to a dollar at the close of business, compared to N375 at which it sold on Monday.

The naira fell to an all-time low of about N400 to a dollar on the parallel market last week fuelling concerns that it would plummet further to N450-N500/$ this week.

But findings showed that the naira defied expectations, climbing to as high as N305 to the dollar at some parallel market points in Lagos on Tuesday afternoon, before settling at N310.

Forex dealers and currency analysts attributed the significant gain on the parallel market to excess supply of the greenback in the market, even as it looked like a lot of speculators lost the shirts on their back.

A reliable source that speculators who thought that by attacking the currency last week, coupled with misplaced concerns that the Central Bank of Nigeria (CBN) was going to stop the allocation of forex for school fees and medical bills abroad, this would compel the central bank and President Muhammadu Buhari to alter their stance against the devaluation of the currency.

But they were disappointed when Buhari, in Egypt at the weekend, adamantly ruled out the devaluation of the naira on the grounds that Nigeria does not have the competitive advantage to benefit from an official currency adjustment.

Reacting to the president’s stance, speculators who had been betting that the naira would depreciate further, started dumping the dollars with reckless abandon, effectively creating excess supply of the greenback in the parallel market.

Commenting on the situation in the secondary forex market, the chairman, Association of Bureau de Change Operators of Nigeria (ABCON), Alhaji Aminu Gwadabe, said: “The market is moving from perception to reality.”

Similarly, an analyst at Ecobank Nigeria, Mr. Kunle Ezun, predicted that the naira would edge higher in the coming days.

“We expect that the naira would appreciate further. We have always said that what happened last week was purely a speculative attack.

Some people felt that if they pushed the naira down to that level, they could force the CBN to devalue, so that when the naira is devalued and the gap widens further, they would now bring out the dollar cash to make a kill,” Ezun said.

He however urged the fiscal authorities to introduce policies that would help stimulate economic activities, saying that the fundamentals of the economy were still weak.

ABCON also aligned with the federal government’s decision not to further devalue the naira.

Gwadabe said this at a media briefing, pointing out that devaluing the naira would create more problems than it would solve.

He said that as a way of enhancing transparency in the BDC sub-sector, his association had decided to introduce a forex rate band weekly.

This rate band is expected to serve as a guide for all BDCs and the public on the prevailing exchange rate across the country, he added.

In addition, it will be operated in line with the regulated forex rate in the economy.

“This is to forestall exploitation of forex end users, and also to ensure that end users are informed to avoid falling victims of exploitation.

“The band will be announced via weekly press releases that will be circulated to the media for publication.

“ABCON will introduce a series of measures aimed at transforming the operations of BDCs in Nigeria to align with global best practices. These include: review and updating of BDC operational manual; introduction of live trading platforms; automation of all transactions and documentation requirements; and increased partnership with the CBN and other relevant agencies.

“Further, as part of its responsibility as a self regulatory organisation (SRO), and also in continuation of its aim to transform its members to compete within the global regulatory currency market, ABCON will seek the approval of relevant monetary and fiscal authorities as well as partnership for effective use of the nation’s external reserves to enhance domestic trade and foreign exchange management.”

“To this end, our website and internet platforms will be developed to position BDCs to serve as agents of Western Union and currency auctioneers.”

“We would also develop platforms that will allow our members to access sources of autonomous foreign exchange like govt agencies, embassies, IOCs and export proceeds, etc,” he explained.

He also urged the federal government to introduce policies that would diversify the economy to increase non-oil export earnings, and reduce imports.

In addition to policies that would diversify the economy, ABCON suggested that the CBN should review the policy of dollar importation into the economy for the purpose of defending the naira.

According to the association, the central bank should introduce a policy whereby the naira is used to intervene in the real sectors of the economy to boost productivity.

Furthermore, Gwadabe said as a way of reducing demand for dollars, the CBN should explore the option of promoting the use and acceptability of naira for transactions within the West African sub-region.

Meanwhile, the Chairman of Stanbic IBTC Holdings Plc, Mr. Atedo Peterside, has expressed concern over the uncertainty arising from the federal government’s foreign exchange policy, warning that it is threatening macroeconomic stability in the country and is unsustainable.

He said the federal government’s foreign exchange policy is the biggest uncertainty facing the country today following the lack of economic policy direction and the likely composition of Buhari’s economic team for much of the third and fourth quarters of last year.

According to him, “The argument at stake is not whether to devalue or not because there has already been an effective devaluation.

“The naira prices of various capital goods are now being ‘correctly’ priced purely on the basis of realistic expected replacement costs and so the economy is sliding towards an unpalatable scenario where the consumer suffers the ‘pains’ of devaluation (rising prices) without witnessing any of the expected ‘gains’ such as enhanced fiscal viability (in local currency terms at least) of the three tiers of government and increased competitiveness of Nigerian businesses.”

“Sadly, most investors here – local and foreign – are currently caught up in a frenzied pursuit of the cheapest available dollars and the difference between losing this game and winning it can be as high as a mind-boggling 50 per cent on new transactions.

“The pursuit of scarce forex for today’s needs has understandably become the main game in town and this has exacerbated the pressures on Nigeria’s foreign exchange reserves and the naira via the one-way bet that is currently on against the naira, that is, everybody wants to take foreign exchange out and nobody really wants to bring it in,” he added.

He further stated that the excitement caused by the important development in Nigeria’s political landscape last year, where a change in government occurred at the federal level after a keenly contested election, has given way to some apprehension surrounding whether a populist government can take the necessary tough economic policy actions that are necessary to restore confidence and stimulate badly needed new investment activity.

FBN Holdings Plc reported net interest income of N61.463 billion in the third quarter of 2020, slightly down from N61.836 billion posted in the same quarter of 2019.

In the unaudited financial statement filed through the Nigerian Stock Exchange, FBN Holdings Net Interest income after impairment charge for losses also declined to N45.446 billion during the period under review, down from N55.483 billion filed in the corresponding quarter of 2019.

The strong third quarter performance was not surprising given what the Group Managing Director of FBN Holdings Plc, Mr. UK Eke, told shareholders in the last AGM.

He said “in line with the commitment to supporting our customers and providing leadership in the financial services industry, we will continue to provide unfettered access to financial services to our customers and address their needs. We are working in line with the guidance of the regulators including the Central Bank of Nigeria (CBN) in providing access to funding as we seek to kick-start the economy and drive growth.”

He assured stakeholders that overall, “the impact on our business has been broadly in line with our expectations, and our resilience, breadth of offerings, and investment in alternative channels have ensured that the Group is able to cushion the effect and thrive.”

“More fundamentally, the Group has begun to reap the dividend of its investment in technology that has enhanced the earning capacity of the business and expanded our market reach,” Eke said. 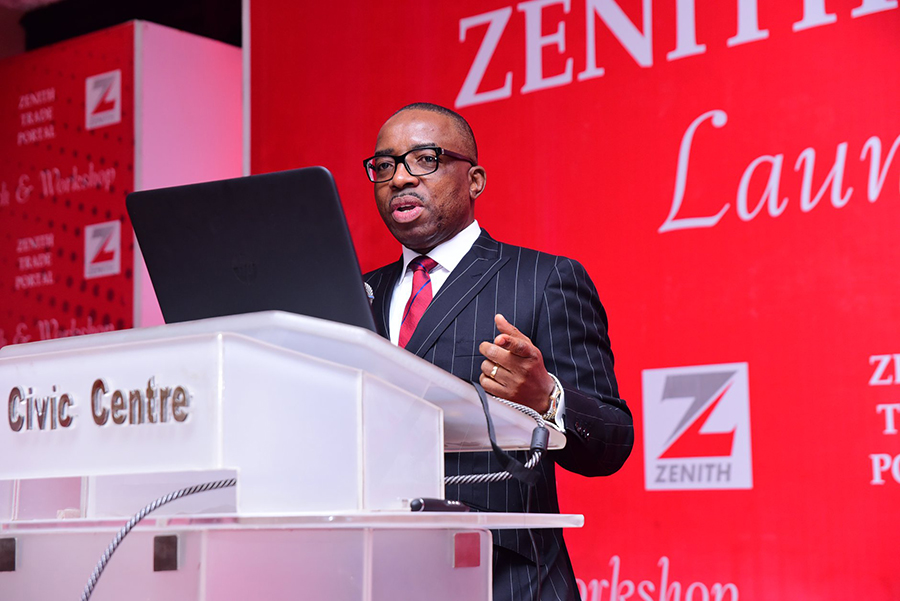 Zenith Bank continues its impressive run in the first nine months of the year despite COVID-19 and other business challenges that limited businesses operating in Nigeria.

The leading financial institution reported N508.975 billion gross earnings in the nine months ended September 30, 2020. This was 4 percent higher than the N491.268 billion posted in the same period of 2019.

The bank disclosed in the unaudited financial statements released through the Nigerian Stock Exchange (NSE). 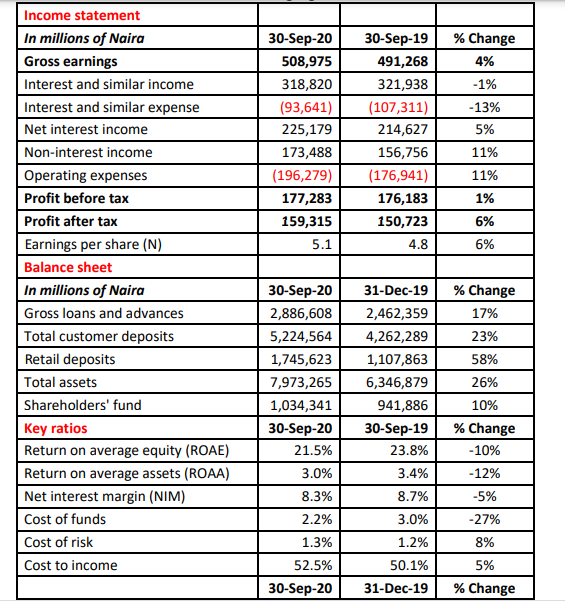 Our liquidity and capital adequacy ratios (CAR), at 67.4% (Bank: 52.5%) and 21.5% respectively at the end of Q3 2020, remain above regulatory thresholds of 30.0% and 15.0% respectively. This gives headroom for providing support to businesses while creating risk assets opportunities in line with our credit risk management framework.

Going into the final quarter of the year, we will remain resilient as we keep adapting to the headwinds in the operating environment and continue to deliver enhanced customers experience and stakeholders value.