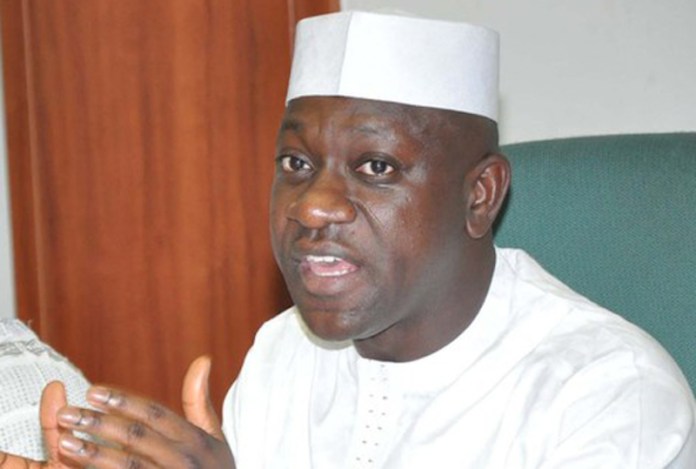 In a dramatic twist to the row over the 2016 budget padding allegations causing disharmony in the House of Representatives, the hunter now appears to be the hunted, going by emerging development.

The erstwhile Chairman of the Committee on Appropriation, Jibrin Abdulmumin, who made the budget-padding allegation, has approached a Federal High Court in Abuja seeking an order to restrain the Nigerian Police from arresting him.

The respondents in the suit are the Nigeria Police, the Inspector-General of Police, the Commissioner of Police (FCT), Hon. Yakubu Dogara, Hon. Yusuf Lasun, Hon. Alhassan Ado Doguwa, Hon. Leo Ogor and the Attorney General of the Federation, Abubakar Malami.

The lawmaker, in his tweets and statements had given the impression that he was enjoying the cooperation of the police, over the allegations against Dogara and others.

But Abdulmumin, in the suit filed before the Federal High Court in Abuja with No: FHC/ABJ/CS/595, said there was a police siege on his home and that up till the time of filing the suit on August 9, 2016, the siege was still in force.

The affidavit deposed on his behalf by his legislative aide, Mr. Bashir Bello said this was “in a bid to arrest him unlawfully and achieve their pre-determined aim of tampering with his fundamental human rights.”

Abdulmumin, in the suit, accused the police of plotting to “nab him and also put him out of circulation and so as to lay their hands on the said documents and destroy the evidence therein, and avoid a leakage of their roles in the budget issue.”

The embattled lawmaker, in a separate suit, also sued Dogara, the Clerk of the House and others, to restrain the lower chamber from suspending him.

Others listed in the suit filed at the Federal High Court Abuja on August 9, 2016, include the Lasun, Doguwa, Ogor and the eight chairmen of standing committees.

The House is set to resume from its summer recess on September 13, 2016.

Abdulmumini in suit No. FHC/ABJ/CS/595, said Dogara and others had perfected plans to ensure his indefinite suspension from the House, after his petition to the EFCC, ICPC and the police.

“That if the reliefs of the Plaintiff are not granted, the Plaintiff would be suspended as a member of the House of Representatives and this would greatly prejudice him and thousands of his constituents who rely on him to afford them their due representation in the Federal legislature,” his affidavit read.

Sources however told THISDAY that Abdulmumin’s fears may not be unconnected with alleged plans by the Economic and Financial Crimes Commission (EFCC), to revive and re-arraign him over a N15 billion money laundering case in October 2011.

Abdulmumin and his firm, Green Forest Investment Ltd, had been charged alongside a former Governor of Nasarawa State, Aliyu Akwe Doma, for laundering stolen state funds totaling N15 billion. In Dec 2012, the EFCC removed his name from its amended charges. THISDAY, however, could not get EFCC’s confirmation on plans to re-arrange Abdulmumin on the money laundering charges. Efforts to also reach Abdmumin by phone calls and text messages proved abortive, as his phone repeatedly rang out unanswered.

The House has been embroiled in crises following the removal of the Abdulmumin by Dogara.

After his ouster, Abdulmumin, accused Dogara, Lasun, Doguwa and Ogor of allocating N40 billion to themselves out of the N100 billion appropriated for the National Assembly, and making “senseless’ insertions into the 2016 budget”.

He also petitioned the Economic and Financial Crimes Commission (EFCC), the Independent Corrupt Practices and Related Offences Commission (ICPC), and the Nigeria Police, demanding the arrest and prosecution of the speaker, three principal officers, and 10 committee chairmen for corruption and abuse of office.