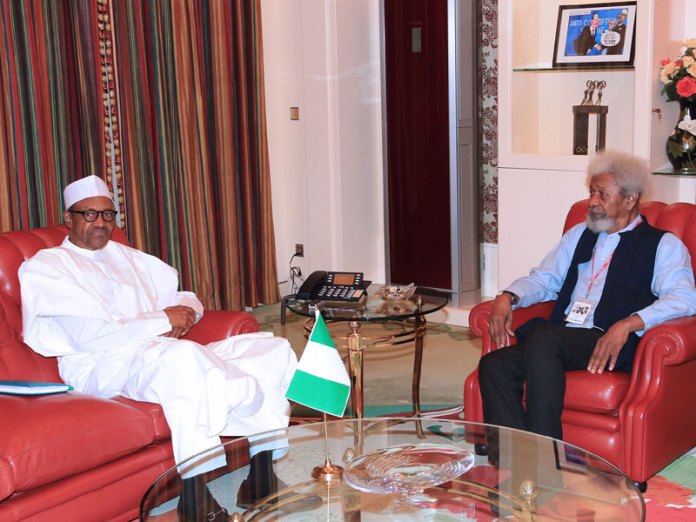 Nobel Laureate, Prof. Wole Soyinka, on Thursday met behind closed doors with President Muhammadu Buhari for close to one hour.

When accosted by State House Correspondents, Soyinka said: “I didn’t come to see you people.”
He apparently was not prepared for journalists’ question and tried to avoid further questions.

However, when pressed further, he said: “I came to discuss national and international matters, general matters, that’s all!”

He was accompanied by a former Managing Director of the Daily Times, Dr. Yomi Ogunbiyi.
The Nobel laureate had in the past expressed concerns at the state of the economy and Buhari’s governance style.

His meeting with the president was listed as private.
Earlier in February, Soyinka called on Buhari to convene an emergency economic conference for experts to brainstorm on the way forward and future of the economy.

Speaking while on a courtesy call on the Minister of Information and Culture, Alhaji Lai Mohammed, in Abuja, Soyinka said the conference became necessary to enable experts diagnose the problems currently facing the country and make necessary recommendations for government to get the economy out of the woods.

He said: “I agree with those who say the economy is bad. It is obvious and it is so bad. I think the presidency should call an emergency economic conference where experts will be enlightened.

“We really need an emergency economic conference, bringing experts together to march the nation forward. I think the economy is not encouraging. Quite frankly, I think most economists will agree with this.”