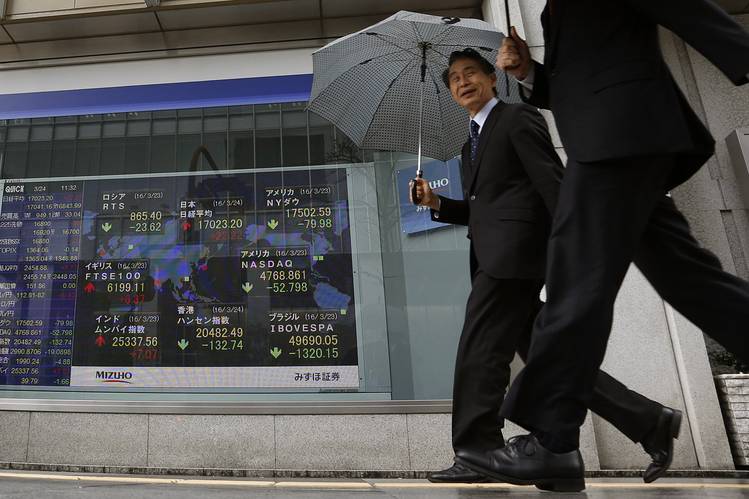 Japanese stocks swung between gains and losses as investors weighed a strengthening yen with prospects for lower U.S. interest rates. Economic data released Friday did little to change the view that the Federal Reserve will take a gradual approach to raising rates.

The Topix index rose 0.6 percent to 1,309.57 at the lunch break in Tokyo, erasing a loss of 0.7 percent. The index dropped 4.7 percent last week, its worst weekly performance in two months. The Nikkei 225 Stock Average added 0.2 percent to 16,197.79. The yen traded at 111.50 per dollar after strengthening 0.8 percent on Friday. Even with signs of life in American manufacturing and jobs data that topped estimates adding to optimism in the U.S. economy, traders still don’t expect higher interest rates until the fourth quarter.

“American ISM figures were encouraging. The dollar-yen is falling for now because the Fed’s stance is taken as being a bit dovish, but that won’t continue into infinity,” said Koji Toda, chief fund manager at Resona Bank Ltd. in Tokyo. “At some point the dollar will stop falling because investors will realize the U.S. economy is, after all, quite strong. And at that time we’ll could see a sudden rebound in the value of Japanese firms that do business globally.”

Odds of a Fed hike this month remained at zero even as data for last month showed that U.S. manufacturing expanded for the first time in seven months and more workers than expected were added to nonfarm payrolls, while the jobless rate crept higher as more people sought work. Expectations for a hike in June are at 24 percent, slightly higher from 20 percent prior to the economic data.

Futures on the Standard & Poor’s 500 Index were little changed after the underlying gauge added 0.6 percent on Friday to close at the highest level this year. Optimism in the U.S. economy and expectations for only gradual Fed tightening overshadowed a selloff in oil.

Exporters led losses on Monday in Tokyo as the stronger yen and weaker-than-expected U.S. sales figures weighed on the sentiment of automakers. Toyota Motor Corp. and Nissan Motor Co. each fell at least 2.6 percent, while Mazda Motor Corp. tumbled 5.8 percent.

Sun Corp., which surged 97 percent last month, was little changed at the lunch break after tumbling as much as 5.8 percent. Shares of the Japanese firm have risen on speculation the company’s Israeli unit is helping the FBI crack iPhones.

Kaneka Corp. surged 11 percent, the most in five years, after the Nikkei reported the chemical manufacturer has developed lithium-ion batteries that are 100 times faster than conventional technology and that can be used to charge mobile phone in 10 minutes.

Sharp Corp. jumped 5.6 percent after the Apple Inc. supplier on Saturday formally signed a rescue deal to sell a majority stake to Foxconn Technology Group. The company also said late Friday that it reached an agreement with its banks on loan terms.