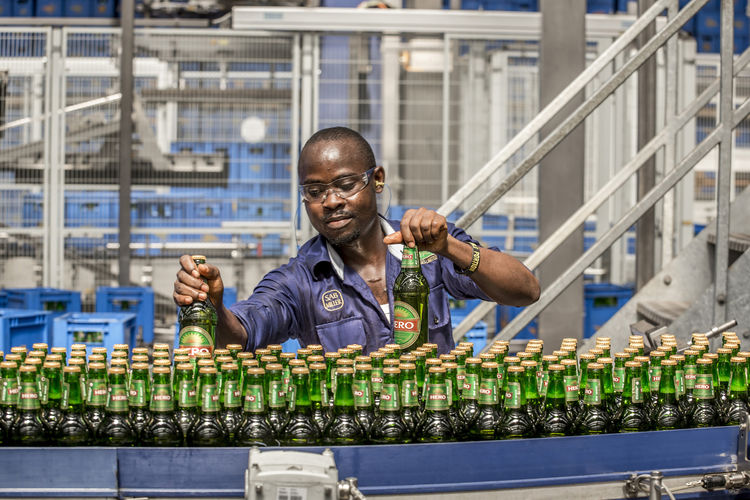 The contribution of the manufacturing sector to the nation’s Gross Domestic Product rose to N6.616bn in the third quarter of last year, statistics from the National Bureau of Statistics indicated.

An analysis of the nine month revenue showed that the sector added N2.141bn to the economy in the first quarter; N2.125bn in the second quarter; and N2.35bn in the third quarter.

The figures also showed that the manufacturing sector surpassed the oil and gas industry by N1.93bn during the nine month period.

For instance, while the report, which was obtained on Friday, indicated that the manufacturing sector contributed N6.616bn in the months under review, the oil and gas added N4.677bn to the economy.

However, this is in contrast with the output of the oil and gas industry in 2014, which added N7.574bn, an amount that was N1.093bn higher than the contribution of the manufacturing sector for that year.

The manufacturing activities captured in the data are the oil refinery, cement, food, beverage and tobacco; textile, apparel and footwear; wood and wood products; pulp, paper and paper products; as well as chemical and pharmaceutical products.

Others are the non-metallic products; plastic and rubber products; electrical and electronics; basic metal, iron and steel; motor vehicles and assembly among others.

But the major revenue earners for the sector were given as food, beverage and tobacco, which contributed N3.15bn during the first three quarters of 2015.

It was reported that the exploration of petroleum and natural gas was becoming unprofitable due by the declining price of crude oil in the international market, which was almost equal to the cost of production.

Since the gradual fall in the price of crude oil in the international market from $114 in June 2014 to around $29 per barrel currently, the revenue generation ability of the industry has been in jeopardy.

Despite this gap between the two sectors, the organised private sector lamented that the 2015 financial year was one of the most challenging as difficulties in the business environment. Experts listed some of the problems as insecurity in parts of the country, weak infrastructure, foreign exchange restrictions, funding constraints, policy inconsistency and the quality of regulatory institutions.

The Lagos Chamber of Commerce and Industry said that the sector lost about N1.46tn in stalled business activities in the fast moving consumer goods, steel, furniture, pharmaceuticals and manufacturing sectors due to forex shortages.

The Manufacturers Association of Nigeria also identified the high cost of credit, poor power supply, high cost of alternative energy and non-availability of local input material as major challenges to the growth of the sector.

It stated, “The average cost of borrowing charged to manufacturers during the period was high and at double digit, which is discouraging to further investment or re-tooling in the manufacturing activities.”

The Director-General, Nigeria Employers’ Consultative Association, Mr. Olusegun Oshinowo, urged the government to give more attention to refining the petroleum products to improve the performance of the manufacturing sector.

In spite of the poor state of the economy, he said that government should not abandon any of its business-enhancing policies.

“For example, we used to have backward integration programme in Nigeria. The purpose of which is to encourage industries to source raw material from the economy, but the government has abandoned that policy and everyone is importing. Irrespective of the state of the economy, you must be clear about the quality of your policy, the outcome of your policy and stay consistent to your policy.

“The local content law in the oil and gas has positive impact. If in the same vein the government had come up with a policy that will promote forward integration in the oil and gas, the output from that sector and its contribution to the GDP would have been significant. Years back, if we had embraced a policy of refining our crude oil, it would have expanded and created more employment than what we have now. It would have saved foreign exchange and earned more for us.”