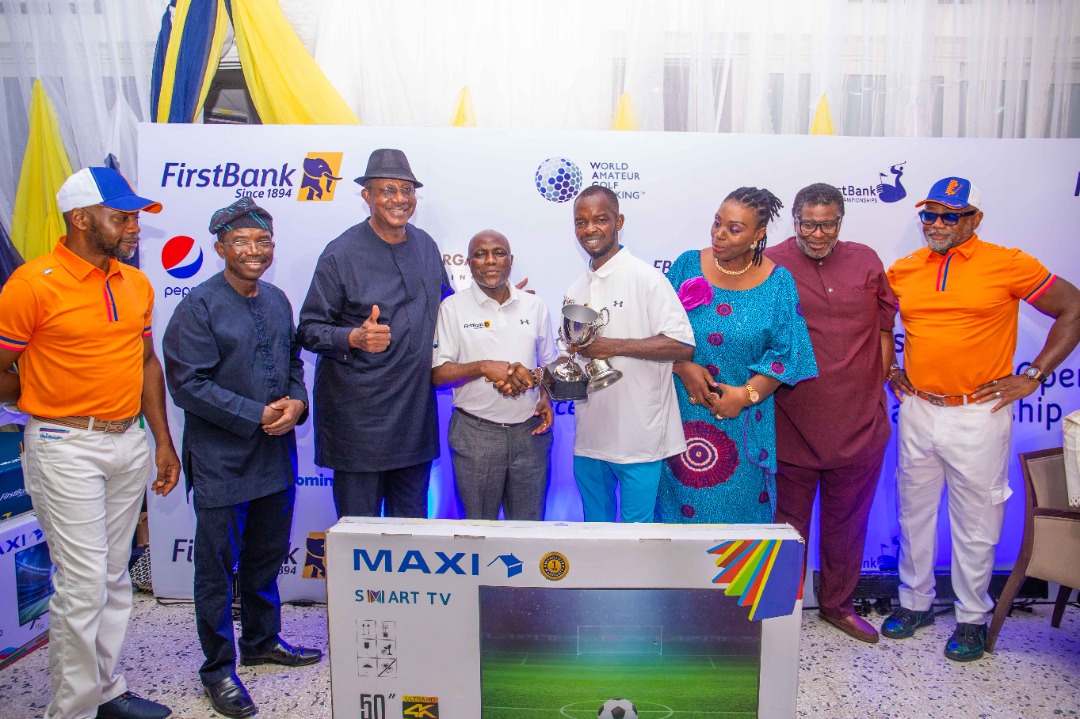 Emmanuel Ojeabulu, winner of the 61 st FirstBank Lagos Open Golf Championship has been listed in the WAGR.

The premier golf championship which was held from 18 – 20 November at the golf section of Ikoyi Club 1938 was keenly contested by over 190 low handicap players from several golf clubs in the country. Benin based Emmanuel Ojeabulu won the 3-day championship.

Playing three-shots off the pace going into the last 18-holes, Ojeabulu played one of the best golf of his life, maintaining steady pars for a closing 74, 3-over the course par to win the World Amateur Golf Ranking recognized event by two shots.

Overnight leader, 20-year-old product of David Mark Golf Academy, George Paul who was tipped to win the tournament collapsed under pressure closing with an unimpressive 79 to lose by two-shots.

In the third position is Muyideen Olaitan, three-time winner of the coveted FirstBank Lagos Open trophy while Iyare Osaze was further down on the winners chart by one-shot, leaving perennial contender, Olajide Owolabi, who shot tournaments best score of 72 on day two of the competition in the fifth position.

First Bank of Nigeria Limited, sponsors of the annual Lagos Amateur Open Golf Championship has pledged its commitment to the continuous sponsorship of the tournament which is one of the longest running golf tournaments in Nigeria.

Speaking at the closing ceremony of the 61 st edition of the tournament in Lagos on Sunday, the Chief Executive Officer of FirstBank, Dr. Adesola Adeduntan who was represented by Executive Director, Chief Risk Officer of First Bank of Nigeria Limited Mr. Olusegun Alebiosu said “This year made it 61 years of our undiluted commitment to this cause, and we are absolutely delighted with the amazing support and partnership we have enjoyed from Ikoyi Club 1938 thus contributing to building a legacy not only for golf and golfers, but sports in its entirety.

To all the amateur golfers produced at this year’s championship, these champions are an inspiration and testament that you can do the impossible and I look forward to celebrating you as winners in future championships. Remember that in the words of Ben Hogan, “The most important shot in Golf is the next one”, he added.

Satisfied with the turnout of the participants, Golf Captain, Tony Oboh thanked the sponsors for keeping the tournament going, saying FirstBank commitment should be emulated.

“It is not easy to keep a tournament like this going, I therefore congratulate FirstBank for their commitment”, Oboh said.

Since its debut, FirstBank Lagos Amateur Open Golf Championship has been the most consistent and premier amateur golf event in West Africa and has produced great champions most of who are competing in the elite professional golf cadre. Last year, the Championship threw up Ilorin based Aminu Kadir who won the landmark edition. It is expected that this year’s edition will produce another great winner.

Other FirstBank-sponsored sporting events include the Georgian Cup of Kaduna Polo Tournament, sponsored for 102 years; the Dala Tennis Hard Court in Kano Club for over 30 years; the Obasanjo Pro-Amateur Golf tournament of Abeokuta Club now in its 6th year. The Bank’s influence in the development of sport in Nigeria is under its First@Sport initiative.

Zenith Bank Emerges “Bank of The Year, Nigeria” in The Banker Awards 2022

The fintech company assured that the application glitches will soon be fixed and customers will gain access to their money again.

Kuda Bank, a leading digital microfinance bank, has said there is no cause for alarm as their customers’ money is safe despite the mobile application issues.

The fintech company operating in Nigeria further assured that the application glitches will soon be fixed and customers will gain access to their money again.

Investors King gathered that currently, users of Kuda are having difficulties in accessing the bank app. Some have bitterly complained that their account balance reads zero despite having money in the account.

The Kuda bank management has, however, responded to the complaints by its customers through its official Twitter handle.

The digital bank admitted that the application was having issues and apologised to its customers for their inability to access their money or use the application adequately.

It stated that the company is aware of the mobile app malfunctioning, as well as the zero account balance error.

According to its statement, work is ongoing to rectify the issue and when properly completed, customers will be alerted. It stressed that their money has not been tampered with and the glitch will soon be resolved.

The company’s response on its Twitter handle, @joinkuda reads, “We are sorry that you still haven’t been able to use your Kuda app.

“We are working with our cloud services provider to sort out the downtime, and we will let you know when it’s been fixed. Your money remains safe and you will be able to access it as soon as services are restored.

“We know that the ₦0.00 balance error reported by several people is worrying but we assure you that it’s just what the app is displaying because of the downtime, not the amount of money you actually have. We will keep sharing updates as we make progress.”

Since last week, the long queues at banks’ Automated Teller Machines (ATMs) have increased as Nigerians lament scarcity of the redesigned naira notes.

Despite the announcement of the Central Bank of Nigeria, CBN, on the extension of the deadline for the acceptance of old notes from January 31, 2023 to February 10, 2023, the crowd has persisted at Banks and their ATM galleries.

Investors King gathered that there is a gross scarcity of the new naira notes in the Southwest states as seen in the data obtained in Lagos, Ogun and Osun by its sources.

Lagosians expressed displeasure over the non-availability of funds at the ATMs and Point of Sale, POS agents which have caused them to be stranded even though they have loaded bank accounts.

They stated that both the new and old notes are no longer dispensed at the ATMs. The people of Ogun have similar experiences as they could not make withdrawals due to the lack of funds in the machines.

Meanwhile, some banks were said to be giving their customers N50 and N100 notes at the counter with a daily limit of N20,000 cash.

Investors King observed that this did not go down well with the people who had spent several hours on the queue but went home with not more than N20,000.

According to a Zenith Bank user in Akute, Ogun state, N5000 was the pegged daily withdrawal limit over the counter without an assurance of receiving it after the frustrating queue.

“We went to Zenith bank at Akute but could not get any money. We went inside the bank and we were told they could only pay us a maximum of N5,000 in N50 notes but the notes were torn and dirty.

“Even to collect the N5000, we queued for hours and eventually we were not paid. We went to the bank’s ATM and were given numbers, after staying in the queue, they later said there was no money. We can’t get new notes and we still can’t get old notes. We are tired and frustrated,” he lamented.

In Osogbo, Osun State capital, ATMs were filled with large numbers of people from the early hours of the day, as early as 3am to 4am. Number tags were issued as users arrived before the machines started dispensing money by 8:30am.

Though the machines dispensed new naira notes, there are withdrawal limits for various banks while some didn’t dispense for other bank users.

At Zenith Bank, Aregbe area in Osogbo, the withdrawal limit is N20,000 for their customers while other bank users can only withdraw N1000 at once for five times which makes it N5000. This angered several residents as they grudgingly withdrew their money with N35 bank charge on each N1000 withdrawal.

Meanwhile, at GT Bank Ogo oluwa area in Osogbo, their ATMs did not accept nor dispense for other bank users. Only their customers returned home with smiles, though not without long hours under the scorching sun.

Nigerians have questioned why the scarcity of new naira notes persist in the midst of fuel scarcity worsening the hardship in the country.